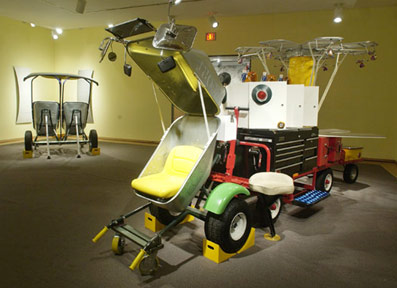 Prize includes $50,000 award and solo exhibition at the Art Gallery of Ontario

(TORONTO – March 1, 2012) Sculptor and installation artist Kim Adams is the winner of the 2012 Gershon Iskowitz Prize at the Art Gallery of Ontario (AGO) for his remarkable contribution to the visual arts in Canada over four decades.

The AGO and the Gershon Iskowitz Foundation will celebrate the award with a reception and exhibition of Adams’ work to be held in December 2012, marking the artist’s second solo showing at the Gallery.

Combining prefabricated industrial hardware and consumer goods, Adams’ idiosyncratic and often humorous works reflect the artist’s own fascination with models, machines and playtime. Inspired by street culture and the philosophy of the readymade, Adams’ work focuses on turning many parts into wry and meaningful wholes.

Currently based in Toronto, the 61-year-old artist was born in Edmonton and has studied at the University of Victoria and the Kootenay School of the Arts in Nelson, B.C.. His work has been shown in solo exhibitions in Toronto and Europe (Zurich, Switzerland; Krems, Austria; and Utrecht, the Netherlands) as well as in group exhibitions in France, Spain, Mexico, Finland, the Netherlands and the U.S.

“Kim Adams is a vibrant and innovative contributor to the Canadian art world, and his energy and vision have rightfully earned him a space on the international stage,” says Matthew Teitelbaum, AGO Director and CEO. “The Art Gallery of Ontario is pleased to collaborate with the Gershon Iskowitz Foundation to present this Prize to a truly deserving Canadian artist.”

Adam’s work was last featured at the AGO in 2007 with a solo exhibition entitled Bugs and Dragons. The installation was a popular element of the Swing Space series during Transformation AGO, and included Dragon Wagon, a colourful and inventive travelling contraption that contained art supplies and activities for families and youth. The AGO collection currently contains two of Adams’ works: Decoy Homes (The Moon), an installation of sheet metal sheds, fluorescent lights and garden furniture, and Sleeper, a sculpture of steel and fabric.

Jeanette Hlinka, President of the Iskowitz Foundation, praised Adams as “a sculptor of great invention and originality. He has investigated the use of playful yet formally brilliant reconfigurations over many years, yet remains fresh. Adams is known around the world for this work.”

In 1986 Gershon Iskowitz created the prize and the foundation which bear his name to recognize and support Canadian artists. Twenty-one years later, the Foundation joined forces with the AGO to carry on the tradition through the Gershon Iskowitz Prize at the AGO, awarded annually to an artist who has made a significant contribution to the visual arts in Canada. The Prize recipient is selected by a jury comprised of Iskowitz Foundation trustees and an invited external curator or artist. For the 2012 Prize, the jurors included Ihor Holubizky, Geoffrey James, Margaret Priest, Jay Smith and Matthew Teitelbaum.

Celebrated Canadian multidisciplinary artist Michael Snow was awarded the 2011 Gershon Iskowitz Prize. An exhibition featuring Snow’s abstract sculptures from the late 1950s to the early 1980s, drawn primarily from the AGO’s collection, will open at the Gallery this summer.

ABOUT THE GERSHON ISKOWITZ PRIZE AT THE AGO

The AGO and the Gershon Iskowitz Foundation joined forces in 2007 to raise awareness of the visual arts in Canada, renaming the annual award initiated over 20 years ago by Canadian painter Gershon Iskowitz (1921-1988). Iskowitz recognized the importance of grants to the development of artists and acknowledged that a grant from the Canada Council in 1987 enabled him to formalize his distinctive style. The AGO is home to the artist’s archives, which include early works on paper, sketchbooks and memorabilia, and holds 29 paintings by Iskowitz spanning 1948 to 1987 in its collection.  Previous recipients include Vera Frenkel, Betty Goodwin, General Idea, Stan Douglas, Murray Favro, Françoise Sullivan, Shary Boyle, Brian Jungen and Michael Snow.

With a collection of more than 80,000 works of art, the Art Gallery of Ontario is among the most distinguished art museums in North America. From the vast body of Group of Seven and signature Canadian works to the African art gallery, from the cutting-edge contemporary art to Peter Paul Rubens’ masterpiece The Massacre of The Innocents, the AGO offers an incredible art experience with each visit.  In 2002, Kenneth Thomson’s generous gift of 2,000 remarkable works of Canadian and European art inspired Transformation AGO, an innovative architectural expansion by world-renowned architect Frank Gehry that in 2008 resulted in one of the most critically acclaimed architectural achievements in North America. Highlights include Galleria Italia, a gleaming showcase of wood and glass running the length of an entire city block, and the often-photographed spiral staircase, beckoning visitors to explore. The AGO has an active membership program offering great value, and the AGO’s Weston Family Learning Centre offers engaging art and creative programs for children, families, youth and adults. Visit ago.net to find out more about upcoming special exhibitions, to learn about eating and shopping at the AGO, to register for programs and to buy tickets or memberships.

May 1, 2012: Picasso: Masterpieces from the Musée National Picasso, Paris

The Art Gallery of Ontario is funded in part by the Ontario Ministry of Tourism and Culture. Additional operating support is received from the City of Toronto, the Canada Council for the Arts and generous contributions from AGO members, donors and private-sector partners.