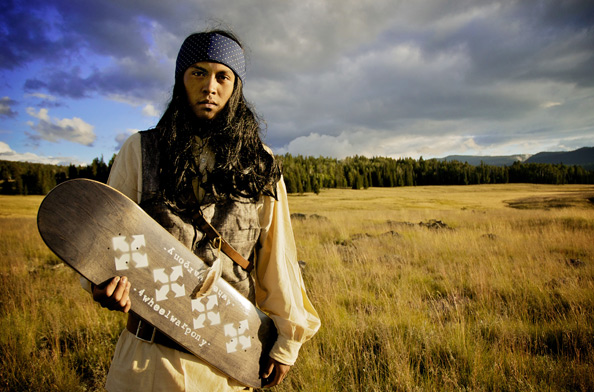 (Toronto, March 16, 2009) From images of Apache kids with skateboards to traditional tribal graphics, Remix: New Modernities in a Post-Indian World explores the challenges of being indigenous and an artist in the 21st century.

Opening at the Art Gallery of Ontario on April 4 and continuing through August 23, Remix features the work of 15 artists from Canada, the United States and Mexico. This generation of artists doesn’t feel compelled to reflect a traditional tribal identity in their work. Instead, they are developing a post-Indian articulation of the aboriginal identity, one that features new ideas and challenges old perceptions.

By definition, remix means an alternative version of a song, one that is different from the original. In the context of this exhibition, remix represents how aboriginal artists are breaking with the historical Indian stereotype and are redefining their identity.

In today’s world of global influences, artists such as Kent Monkman and Hector Ruiz use their rich Aboriginal heritage as a foundation and are inspired by issues of culture, nationality, ethnicity and identity, which together produce a unique creative perspective.

“All the artists share various degrees of Native ancestry, but they do not want this to be the only way they are defined,” says Gerald McMaster, AGO’s curator of Canadian art. “The world has become a fusion of culture, nationality and ethnicity. These artists use their heritage to carve a new path, creating a distinctiveness that is different than their tribal identity of the past.”

These artists’ influences range from French theory to hip-hop music and their work is created through a variety of media. A large revolving sculpture of dangling animals made of bunched-up clear plastic packing tape hangs glistening from the ceiling in Toronto-based artist David Hannan’s work. In her Let’s Dance video, Washington artist Anna Tsouhlarakis learns 30 different dances – from the waltz to the twist. Presented in home-video quality, Tsouhlarakis and a friend challenge conventional expectations of the Aboriginal identity: instead of performing a Native dance, she is seen performing every style of dance from popular culture.

There are some artists in this exhibition who depict Native subject matter more obviously than others. Taking a more cinematic approach, a short video by Montreal-based Nadia Myre, called Portrait in Motion, shows an aboriginal woman in a half-birchbark and half-aluminum canoe paddling gently across a beautiful still lake in a morning mist. This dream-like journey becomes a metaphor for the passing of the traditional Indian identity.

Remix: New Modernities in a Post-Indian World is organized by the Heard Museum in Phoenix and the Smithsonian’s National Museum of the American Indian, and is co-curated by Gerald McMaster and Joe Baker.

Contemporary programming is supported by the Canada Council for the Arts.