Message of Thanks from Matthew Teitelbaum 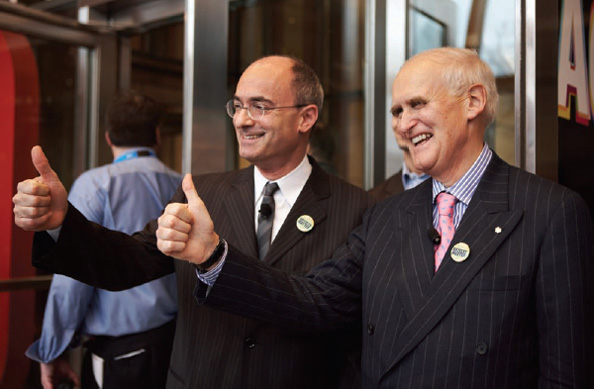 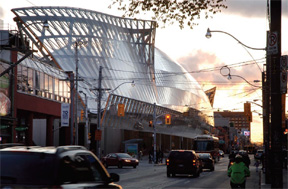 AGO Opening By Numbers

4,500 people who waited in line for nearly two hours along Dundas Street, down McCaul Street, through Grange Park and all the way to Beverley Street on the rainy Public Opening date of November 14, 2008

45,438 invitations to AGO Opening events mailed to donors, AGO members, friends and supporters

26 special Opening events hosted by the AGO

75,000 visitors who came to the newly transformed AGO during Opening Week

We built it together.

Frank Gehry, Ken Thomson, AGO staff and volunteers, 3,848 other generous donors and you came together in support of a unified, bold vision — a transformed AGO and an imaginative new home for art.

A soaring, sweeping façade. Blue titanium reaching for the sky. An inviting new entrance and a welcoming, light-filled interior. Natural elements such as Douglas fir wood and ambar limestone. More than 4,000 stunning works of art installed in 110 galleries. All of this is our Art Gallery of Ontario.

Years in the making, the Transformation AGO project was complex in its scope and ambition. But from the moment we shared our dream for a new Art Gallery of Ontario, the community rallied — and the anticipation began.

In 2002, we announced an unprecedented donation of art and financial support by Ken and Marilyn Thomson — and a redesign and expansion of our building, led by Frank Gehry. During 2003 and 2004, more than 18,000 AGO members, neighbours and friends came to see the design proposals for the new Gallery in a series of Open Houses.

Construction began in tandem with the Campaign launch in June 2005. By then, the AGO had raised $180 million through twenty-five gifts of $1 million or more, in addition to foundational support from Ken and Marilyn Thomson and from the provincial and federal governments.

In September 2005, we created the innovative New Founders program to involve a group of emerging business and social leaders in the life of the Gallery — individuals who will help shape philanthropy at the AGO over the next decades. The program, co-chaired by Maxine Granovsky and David Macdonald, surpassed its initial goal of one hundred members and, to date, has brought in excess of $3 million in support of the Building Fund.

Subsequent Campaign milestones included the announcement of a $5 million gift from Charles and Marilyn Baillie to name Baillie Court, the Gallery’s new event space. Other gifts of $5 million were made by Margaret and Jim Fleck, by Rosamond Ivey and by Allan Slaight and Emmanuelle Gattuso.

In April 2007, the Gallery’s fundraising efforts received a significant boost with a $10 million gift from twenty prominent families in Toronto’s Italian community. In recognition of this important contribution to the Gallery and of the leadership of the Italian-Canadian community, the AGO named its sculpture promenade Galleria Italia. Since this announcement, six more families have lent their support to this initiative, and Galleria Italia has become one of the signature destinations within the new AGO.

Also in 2007, we launched Phase 1 of three community initiatives — inviting members and friends of the Gallery to participate in Transformation AGO. Approximately $3 million was raised from the community at large during Phases 1 and 2, in support of the Building Fund and installation priorities. Bolstered by the success of the first two initiatives — and hoping to include new members and friends — we made our final community appeal earlier this year. Overall, nearly 3,000 people made gifts to Phases I, 2 or 3. And 2,679 of them donated $1,000 or more. They will be acknowledged in perpetuity on the Campaign Donor Wall — an enduring testament to the breadth of community involvement in our collective vision for the AGO.

In June 2008, the original Campaign goal of $254 million was reached five months in advance of opening — giving the Gallery the confidence to increase its ambition by an additional $22 million. In September 2008, husband and wife Maxine Granovsky and Ira Gluskin committed an additional $7 million to their previous gift of $3 million. In recognition of this $10 million donation, the AGO named its Frank Gehry–designed lobby Maxine Granovsky and Ira Gluskin Hall.

On the heels of the Granovsky-Gluskin gift, Vivian and David Campbell increased their support in October 2008 with a generous and trail-blazing donation of $5 million to name the Vivian & David Campbell Centre for Contemporary Art. As part of their donation, the Campbells requested that the naming be term-limited rather than in perpetuity. As a result, in 2020 they will relinquish the name, enabling tomorrow’s AGO to offer naming rights to tomorrow’s supporters of the Gallery.

And then November 2008 was upon us, and we welcomed the world to our new Gallery — a place that lives and breathes the power of great art. We celebrated for days as more than 62,000 people poured into the AGO during the free Public Opening weekend, beginning on November 14.

Remarkably, at this same time, we also reached our revised campaign goal of $276 million. Our campaign chair, Michael Koerner, and his wife, Sonja, had already added to their previous support to become leading donors to Transformation AGO after Ken and Marilyn Thomson and the Thomson family, and in the final week of fundraising success was achieved thanks to several donors who stepped forward with $1 million gifts to close the gap: F. Anthony and Elizabeth Comper; Al and Malka Green; Robert and Cheryl McEwen; and John and Liz Tory. The Thomson family capped off this resounding success with an additional $30 million gift on top of their initial contribution of $70 million. In total, we raised $306 million — the most successful cultural campaign in Canada’s history.

Transformation AGO — a project built by the community, for the community — has been achieved. What a story! And each of you played a role in our astonishing success because you believed in, and committed to, the Gallery’s future.

Thank you, all 3,849 of you, for your contributions to Transformation AGO. I am truly, deeply grateful for your generous participation. You helped make our shared dream come true — and it was worth the wait.

Welcome to your new home!