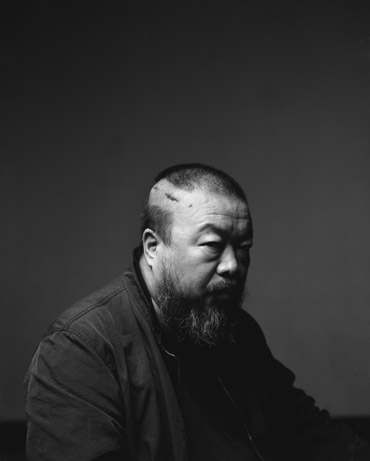 Ai Weiwei is an artist with a very new kind of visibility. He has transcended his artwork to become a worldly figure who, for many, symbolizes the assertion of freedom of expression against great odds. Using the fame and recognition garnered by his art, he has taken on issues that could not be raised publically in China.

Ai has been the recipient of numerous grants, honours and awards, most recently in 2012 the inaugural Václav Havel Prize for Creative Dissent of the Human Rights Foundation; the International Center of Photography Cornell Capa Award; an honourary fellowship from the Royal Institute of British Architects; an Honourary Degree from Pratt Institute; and a foreign membership in the Royal Swedish Academy of Arts. Other honours over the past five years include a Chinese Contemporary Art Award for Lifetime Achievement; an International Architecture Award for Tsai Residence; Das Glas der Vernunft (The Prism of Reason), Kassel Citizen Award; The Bianca Jagger Human Rights Foundation Award for Courage; the Skowhegan Medal for Multidisciplinary Art; Wallpaper Design Award Best New Private House for Tsai Residence; and a Wall Street Journal Innovators Award (Art). Ai Weiwei is consistently included in top artist and human rights lists, including GQ Men of the Year in 2009 (Germany); the Art Review Power 100, rank 43 in 2009; the Art Review Power 100, rank 13 in 2010; the Art Review Power 100, rank one in 2011; Foreign Policy Top Global Thinkers of 2011, rank 18; and runner up in Time’s Person of the Year in 2011. Ai Weiwei helped establish Beijing East Village in 1993, co-founded the China Art Archives & Warehouse in 1997 and founded the architecture studio FAKE Design in 2003. He studied at the Beijing Film Academy, Parsons School of Design and Art Students League of New York; upon returning to China he collaborated with Swiss architects Herzog & de Meuron as the artistic consultant on the Beijing National Stadium for the 2008 Olympic Games.

Watch a video chat between Ai Weiwei and AGO CEO and Director Matthew Teitelbaum recorded live at AGO First Thursdays on September 5, 2013