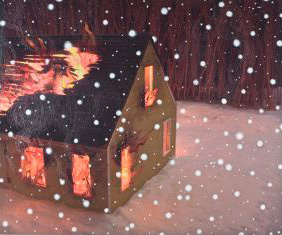 (TORONTO - September 30, 2009) The Art Gallery of Ontario has acquired a major new installation by Winnipeg based artist Sarah Anne Johnson, supported by a generous donation from art collector Michael F. B. Nesbitt. House on Fire explores the story of Johnson’s maternal grandmother’s unwitting participation in CIA-funded brainwashing experiments at the Allan Memorial Institute at McGill University in the mid-1950s.

As in her previous work, The Galapagos Project (2007) and Tree Planting (2005), Johnson works in series, switching between media to comprehensively explore her subject matter. House on Fire consists of 13 works on paper (paintings and drawings on photographs and newsprint); 9 bronze sculptures; and a major sculpture in the form of a surreal dollhouse, from which the series takes its title. The AGO is acquiring all of the works listed above.

“House on Fire is a tremendous achievement, significant both in its broad artistic scope and intimate personal vision that grapples with unsettling subject matter,” says David Moos, the AGO’s curator of contemporary art. “The installation joins David Altmejd’s monumental work The Index as a symbol of the AGO’s ongoing commitment to featuring works of defining importance by Canadian contemporary artists.”

Says Johnson, “It is such a thrill to know that the works will remain together and in context as part of the collection of one of Canada’s most important art institutions. I couldn’t be more excited.”

Michael F. B. Nesbitt is a noted contemporary art collector based in Winnipeg who has contributed to Plug In ICA and the Winnipeg Art Gallery. Says Nesbitt, “Sarah Anne Johnson is a shining example of an artist able to tell unique, personal stories in a universal way. I am happy to support her work and the wonderful collection at the Art Gallery of Ontario.”

House on Fire was first installed at the Art Gallery of Ontario in the summer of 2009 to critical acclaim. It is currently on display at the Julie Saul Gallery in New York. Says Saul, “We’ve had a special relationship with Sarah from the beginning of her short but highly impressive career. We’re thrilled that her work continues to receive the recognition that we know it is so worthy of and that the installation will be housed within Canada’s leading art museum.”

Sarah Anne Johnson was born in Winnipeg in 1976. She completed a BFA at the University of Manitoba and an MFA at the Yale School of Art. In 2005, her exhibition Tree Planting, comprising more than 60 images, was acquired by the Guggenheim Museum. In 2008, Johnson was the inaugural winner of The Grange Prize, a photography prize co-sponsored by Aeroplan and the AGO. The prize includes a $50,000 cash prize and a solo exhibition at the AGO, for which House on Fire was created. In addition to the aforementioned museums, Johnson’s work is also part of the collections of the Spencer Museum of Art, Lawrence, Kansas; Yale University Art Gallery; and the National Gallery of Canada. Johnson lives and works in Winnipeg.

With a permanent collection of more than 79,000 works of art, the Art Gallery of Ontario is among the most distinguished art museums in North America. In 2008, with a stunning new design by world-renowned architect Frank Gehry, the AGO opened its doors to the public amid international acclaim. Highlights include Galleria Italia, a gleaming showcase made of wood and glass running the length of an entire city block along the Gallery’s façade; and the feature staircase, spiralling up through the roof of Walker Court and into the new contemporary galleries above. From the extensive Group of Seven collection to the dramatic new African art gallery; from David Altmejd's monumental installation The Index to Peter Paul Rubens' masterpiece The Massacre of The Innocents, a highlight of the celebrated Thomson Collection, there is truly something for everyone at the AGO.

A Massive Uprising at the AGO: Fight for your right to party

March 27, 2009. Prepare for rebellion at Massive Party, the Art Gallery of Ontario’s first on-site benefit since its grand reopening.