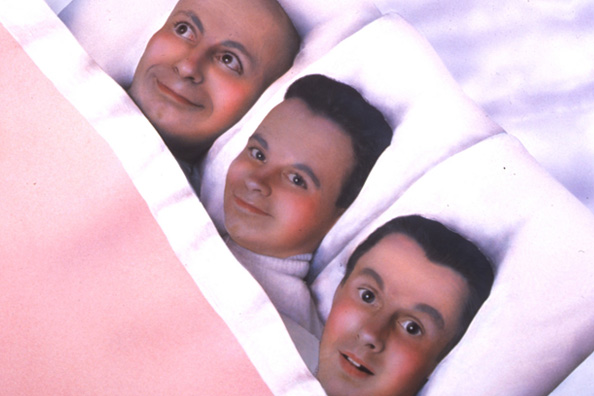 Image Information
Haute Culture to occupy AGO’s contemporary tower through January 2012
“This is the story of General Idea and the story of what we wanted. We wanted to be famous, glamorous, and rich. That is to say, we wanted to be artists and we knew that if we were famous and glamorous we could say we were artists and we would be.”
— General Idea, excerpt from “Glamour,” FILE Magazine, vol. 3, no. 1, fall 1975.
(TORONTO – June 22, 2011) Next month, the Art Gallery of Ontario (AGO) will open an exhibition of unprecedented scale that celebrates the work of the Canadian artist group General Idea. Occupying more than 20,000 sq. ft. of Gallery space on the fourth and fifth floors of the AGO’s Vivian & David Campbell Centre for Contemporary Art, Haute Culture: General Idea — A Retrospective, 1969 – 1994 will be on view July 30, 2011, through January 1, 2012. The exhibition features 336 works by the groundbreaking multidisciplinary group, including 107 works from the AGO collection, spanning their prolific and influential 25-year career.
Curated by Paris-based independent curator Frédéric Bonnet, Haute Culture is the first comprehensive retrospective devoted to General Idea, a collaboration between artists AA Bronson, Felix Partz and Jorge Zontal that began Toronto in 1969. The group’s transgressive concepts and provocative imagery challenged social power structures and traditional modes of artistic creation in ever-shifting ways, until Partz and Zontal’s untimely deaths from AIDS-related causes in 1994.
“General Idea is a truly seminal Canadian artist group whose diverse and increasingly influential production warrants deep and comprehensive consideration,” says Matthew Teitelbaum, the AGO’s Michael and Sonja Koerner Director, and CEO. “We are so pleased to mount an exhibition of their work on this large a scale, as I know that our visitors will find their exuberant and exacting vision to be intensely rewarding.”
Haute Culture is organized around five themes central to the trio’s production: “the artist, glamour and the creative process”; “mass culture”; “architects/archaeologists”; “sex and reality”; and “AIDS.” In addition to the works on view inside the exhibition, the AGO will install the artists’ two-metre-tall AIDS sculpture at the corner of Dundas West and Beverley streets.  The lacquered metal sculpture, created in 1989, is based on Robert Indiana’s 1970 LOVE sculpture and will be on view throughout the exhibition’s run. Other highlights of Haute Culture include:
“Through a prolific creation, General Idea’s body of work reveals a complex combination of reality and fiction, and of parody and rigorous cultural critique,” says Bonnet. “Treating the image as a virus that infiltrates every aspect of the real world, the group set out to colonize it, modify it and so present an alternate version of reality. Their visionary influence has only become more apparent with the passage of time.”
Haute Culture was first exhibited at the Musée d’Art moderne de la Ville de Paris, from February 11 to May 29, 2011. The AGO’s presentation of the exhibition is curated by David Moos, the Gallery’s former curator of modern and contemporary art, and Georgiana Uhlyarik, the AGO’s assistant curator of Canadian art.
A 224-page hardcover catalogue has been published to coincide with the exhibition. Edited by Bonnet, General Idea features more than 200 colour and black-and-white reproductions and includes contributions from Bonnet, Bronson and Moos, among others. Published by JRP|Ringier and distributed by Distributed Art Publishers, the publication is available at shopAGO for $44.
AGO members receive exclusive early access to Haute Culture at the Members’ Preview on Wednesday, July 27, from 10 am to 8:30 pm. AGO members receive unlimited free admission to the AGO’s permanent collection, among other benefits and discounts. More information on AGO membership can be found at http://www.ago.net/membership.
Haute Culture: General Idea — A Retrospective, 1969 – 1994 is conceived and organized by the Art Gallery of Ontario in conjunction with the Musée d’Art moderne de la Ville de Paris. The exhibition is generously supported by the Volunteers of the Art Gallery of Ontario, Thomas H. Bjarnason & Woodrow A. Wells and Paul E. Bain & Isa Spalding. Contemporary programming at the AGO is supported by the Canada Council for the Arts.

ABOUT THE AGO
With a permanent collection of more than 80,000 works of art, the Art Gallery of Ontario is among the most distinguished art museums in North America. In 2008, with a stunning new design by world-renowned architect Frank Gehry, the AGO opened its doors to the public amid international acclaim. Highlights include Galleria Italia, a gleaming showcase made of wood and glass running the length of an entire city block, along the Gallery’s facade; and the feature staircase, spiralling up through the roof of Walker Court and into the new contemporary galleries above. From the extensive Group of Seven collection to the dramatic African art gallery; from the cutting-edge works in the contemporary tower to Peter Paul Rubens’ masterpiece The Massacre of The Innocents, a highlight of the celebrated Thomson Collection, there is truly something for everyone at the Art Gallery of Ontario.
-30-
For more images and more information, contact:
Sean O’Neill, 416-979-6660 ext. 403, sean_oneill@ago.net
Antonietta Mirabelli, 416-979-6660 ext. 454, antonietta_mirabelli@ago.net
The AGO acknowledges the generous support of its Signature Partners: BMO Financial Group, Signature Partner of the Canadian Collection Program; Amex, Signature Partner of the Contemporary Collection Program; and Aeroplan, Signature Partner of the Photography Collection Program.
The Art Gallery of Ontario is funded in part by the Ontario Ministry of Tourism and Culture. Additional operating support is received from the Volunteers of the AGO, the City of Toronto, the Department of Canadian Heritage and the Canada Council for the Arts.