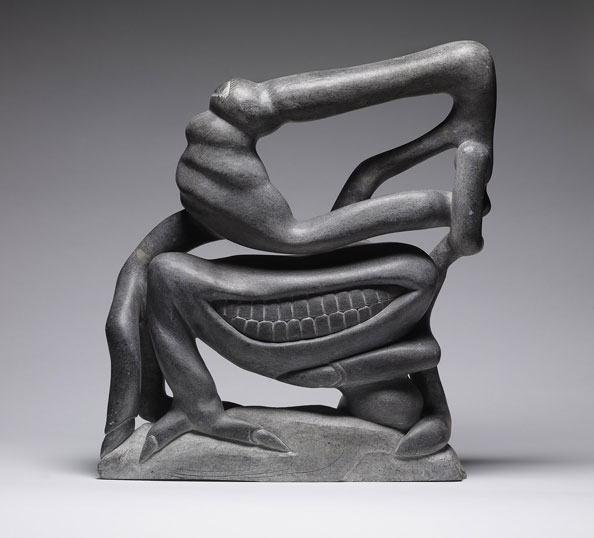 (March 14, 2011) On April 2, the Art Gallery of Ontario will unveil a sprawling exhibition that displays for the first time highlights from one of the world's most comprehensive collections of Inuit art. Inuit Modern: The Samuel and Esther Sarick Collection, on view until October 16, traces the transformation of Inuit art in the 20th century and features more than 175 works by 75 artists - including sculpture, prints, and drawings.

The exhibition considers how the Inuit have coped with and responded to the swift transition from a traditional lifestyle to one marked by the disturbing complexities of globalization and climate change. Curated by Gerald McMaster, the AGO's Fredrik S. Eaton Curator, Canadian Art, and co-curated by Ingo Hessel, curator of the Museum of Inuit Art in Toronto. Inuit Modern draws from multiple communities and periods and embraces voices both traditional and contemporary in its consideration of the history and future of Inuit art.

"The genesis of Inuit Modern is in the dedication of Sam and Esther Sarick, whose lifelong commitment to collecting contemporary Inuit art has given the AGO the most significant collection of Inuit sculpture in the world," says Matthew Teitelbaum, the AGO's Michael and Sonja Koerner Director, and CEO. "The Saricks are collection builders, certainly, but they are also nation builders, and their gift ensures that Inuit artists retain their richly deserved place in the history of Canadian art."

"Collections have a life of their own, but then ultimately they need a museum or gallery to validate their existence," says Sam Sarick. "Collectors are only custodians for a little while, but the collections rightfully belong to the public for posterity. We hope that we have looked after the public's interest and helped to whet a taste for Inuit art at the AGO. We have certainly enjoyed our quest."

Inuit Modern features work by many of the most prominent Inuit artists of the 20th century, including David Ruben Piqtoukun, Kenojuak Ashevak, Karoo Ashevak, Annie Pootoogook, and Lucy Tasseor, among others. The exhibition is accompanied by a 272-page colour catalogue co-published by the Art Gallery of Ontario and Douglas & McIntyre Inc, which includes contributions by leading Canadian scholars in the field. The catalogue, also titled Inuit Modern, is edited by McMaster and available at shopAGO for $55.

"Inuit art in the latter half of the 20th century embodies the evolution of a modernist Inuit aesthetic - one that springs from an ancient cultural context to create an exciting new hybridized art form," says McMaster. "This exhibition traces the artistic, social, political, and cultural transformation of the North over the past century, examining how colonial influence and artistic agency have together informed and inspired the work of these visionary artists."

Since 1990, Inuit art has been clearly positioned at the AGO as an integral part of the story of Canadian art. In the reinstallation of the AGO's collection in 2008, Inuit art was situated throughout the entire building, to exist in dialogue with art from various times and places, integrating the Inuit voice into the overarching history of art.

In conjunction with the opening of the exhibition, the AGO will be hosting the Inuit Modern Symposium, a two-part event that reflects on the statement, ‘it is not who we are, but where we come from and where we are going.' Part one, taking place April 1, is a series of three online panel discussions featuring McMaster, Kenojuak Ashevak, David Ruben, and others.

Part two is a full-day event at the AGO on Saturday, April 2, and features more than 13 scholars, curators, and artists discussing Inuit art and its history, development, and future.

Inuit Modern is generously supported by the J.P. Bickell Foundation and is organized by the Art Gallery of Ontario. Contemporary programming at the AGO is supported by the Canada Council for the Arts.


ABOUT THE AGO
With a permanent collection of more than 79,450 works of art, the Art Gallery of Ontario is among the most distinguished art museums in North America. In 2008, with a stunning new design by world-renowned architect Frank Gehry, the AGO opened its doors to the public amid international acclaim. Highlights include Galleria Italia, a gleaming showcase made of wood and glass running the length of an entire city block along the Gallery's façade; and the feature staircase, spiraling up through the roof of Walker Court and into the new contemporary galleries above. From the extensive Group of Seven collection to the dramatic new African art gallery; from the cutting-edge works in the contemporary tower to Peter Paul Rubens' masterpiece The Massacre of The Innocents, a highlight of the celebrated Thomson Collection, there is truly something for everyone at the AGO.