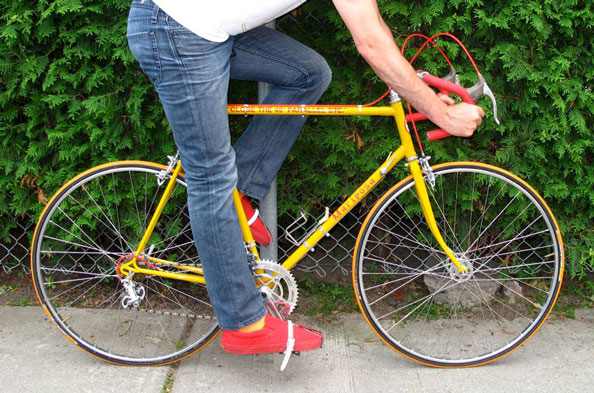 Butler to host an all-night painting competition for Nuit Blanche and exhibit new work in the AGO’s Toronto Now series.

(TORONTO – Sept. 14, 2011) The Art Gallery of Ontario (AGO) launches a new artist-in-residence program this month, including a dedicated studio in the newly built Weston Family Learning Centre. The program, the first of its kind at a major Canadian art museum, will host up to six artists each year for eight-week terms. Paul Butler is the AGO’s first artist-in-residence, and kicks off the program with an all-night event at the Learning Centre during Nuit Blanche on Oct. 1.

Butler is also the latest artist to be featured in the AGO’s Toronto Now series
with his installation The Greg Curnoe Bicycle Project, which pays homage to influential Canadian artist Greg Curnoe. Opening Sept. 17 and guest curated by Tatiana Mellema, the installation features photographic and video elements documenting Butler’s rides around London, Ont. with the late artist’s friends and family and members of the arts and cycling communities in London. The installation also includes a custom-built replica of Curnoe's bicycle, which Butler built with Mike Barry, a friend of Curnoe’s and the owner of Mariposa Cycle in Toronto.

“Paul Butler is an artist whose keen interest in community and institution building makes him well suited to be the first artist-in-residence at the AGO,” says Matthew Teitelbaum, the AGO’s Michael and Sonja Koerner Director, and CEO. “The Artist-in-Residence Program is designed to spark connections between our visitors and the artist community, and the events and programs Paul has planned are an ideal fulfillment of the program’s terrific potential.”

For Nuit Blanche, Butler has organized The Other Painting Competition, an art competition for emerging artists that features life-painting contests designed by established artists
selected by Butler, including Guy Maddin, Dean Baldwin and Kelly Mark. The artwork created that evening will be exhibited in the Learning Centre’s community gallery until January 2012, when the winner will be announced. Chosen by public vote, the winner of the 12-hour painting challenge receives a solo exhibition in The Museum of Contemporary Canadian Art's retail space.

“I'm extremely honoured to be the first artist-in-residence at the AGO — I’m still pinching myself, in fact,” says Butler. “I'm overwhelmed by the way Toronto and the AGO have embraced me since moving here from Winnipeg. I’m excited to continue building bridges and connecting with a community beyond the art world with the support of the AGO and its staff. We've got tons of exciting projects planned within the residency, so stay tuned.”

As part of his residency, Butler is designing a public program called Post-Post Graduate Studies. Intended to investigate the links between artistic practice and well being, the program will include: a series of classes on meditation and yoga inside the Gallery; “Bicycle Fieldtrip,” weekly artist-led cycling tours through the city held in partnership with ArtSpin; and “Hangover Movie Night,” Sunday evening film and video jam sessions held in the Learning Centre. More about the program will be posted in the coming weeks at www.ago.net/artist-in-residence.

The AGO’s Artist-in-Residence Program is generously supported by its lead sponsor Partners in Art. The Weston Family Learning Centre was made possible by a landmark donation from The W. Garfield Weston Foundation and from the Government of Canada’s Infrastructure Stimulus Fund.

On view through Nov. 13, Paul Butler: The Greg Curnoe Bicycle Project continues the AGO’s Toronto Now series, a rotating series of contemporary art projects that puts the focus on Toronto
artists and displays their work in the free, street-facing Young Gallery. A reception to celebrate the opening of Butler’s installation will be held in the Young Gallery on Saturday, Sept. 24 from 3 to 5 p.m. Artists previously featured in the series include Dean Baldwin, Will Munro, Allyson Mitchell, and most recently Libby Hague. The next installation opens Nov. 19 and will feature work by artist John Dickson.

With a permanent collection of more than 80,000 works of art, the Art Gallery of Ontario is among the most distinguished art museums in North America. In 2008, with a stunning new design by world-renowned architect Frank Gehry, the AGO opened its doors to the public amid international acclaim. Highlights
include Galleria Italia, a gleaming showcase made of wood and glass running the length of an entire city block, along the Gallery’s facade; and the feature staircase, spiralling up through the roof of Walker Court and into the new contemporary galleries above. From the extensive Group of Seven collection to the dramatic African art gallery; from the cutting-edge works in the contemporary tower to Peter Paul Rubens’ masterpiece The Massacre of The Innocents, a highlight of the celebrated Thomson Collection, there is truly something for everyone at the Art Gallery of Ontario.


The Art Gallery of Ontario is funded in part by the Ontario Ministry of Tourism and Culture. Additional operating support is received from the Volunteers of the AGO, the City of Toronto, the Department of Canadian Heritage and the Canada Council for the Arts.