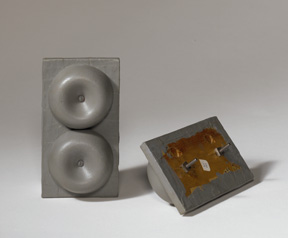 Image Information
(Toronto - August 4, 2010) This fall, the fourth floor of the Vivian and David Campbell Centre for Contemporary Art at the Art Gallery of Ontario will feature AT WORK: Eva Hesse - Studiowork, Betty Goodwin - Work Notes, Agnes Martin - Work Ethic.  From September 22, 2010 to January 2, 2011 experience these three linked yet unique exhibitions exploring the process and labour of art in the studio.

"It is an honour to present this astounding exhibition in such a unique capacity," says Matthew Teitelbaum, AGO director and CEO.  "Through the work of these remarkable women we discover the significance of the artistic process, and the immense influence of that process on great works of art."

Eva Hesse - Studiowork, organized by the Fruitmarket Gallery, Edinburgh, and curated by Briony Fer and Barry Rosen, brings together 50 of the artist's small ‘test' pieces or prototypes,  to examine how experimental practices and working methods in the studio informed Hesse's larger sculptures.  These works, many of which have never been shown publicly in Canada, offer visitors a remarkable, first time opportunity to observe a new aspect of Hesse's work, and to appreciate her contribution to contemporary art.

Betty Goodwin - Work Notes explores the artist's creative thought process - how she worked through ideas in the studio and in hundreds of notebooks, and how these private creative places led to her finished works.  Curated by Georgiana Uhlyarik, AGO assistant curator, the exhibition features over 100 of the artist's sketchbooks, a promised gift from the artist to the Gallery's special collections. The notebooks have never been shown publicly in such a capacity.  The sketchbooks are accompanied by a number of finished works from the AGO's permanent collection, as well as interactive pages on touch screens, allowing visitors to experience the artistic process from start to finish.

"Goodwin's prints, paintings, sculptures, installations and drawings have asserted her position as one of Canada's most important artists of the 20th century," says Uhlyarik.  "This exhibition provides an incredible opportunity for visitors to experience the intense commitment and industrious labour required to create extraordinary works of art."

Agnes Martin: Work Ethic explores Martin's artistic vocabulary and her remarkable commitment to the work of painting.  Curated by Michelle Jacques, AGO associate curator, the exhibition features The Islands, a monumental series of 12 paintings on loan from the Whitney Museum of American Art, and is accompanied by pieces from the AGO's permanent collection.  This is the most significant showing of Martin's works on canvas in Canada in the past 15 years.

"This is an unprecedented opportunity to explore the work of Agnes Martin," says Jacques.  "Her unwavering commitment to her practice resulted in a body of inspirational work that occupies a distinct place in the development of 20th century painting."

To celebrate this exhibition, the AGO is hosting a series of talks and lectures, featuring Lucy Lippard on Eva Hesse, Richard Tuttle on Agnes Martin and Kitty Scott on Betty Goodwin.  Talks and lectures for AT WORK are generously supported by the Terra Foundation for American Art.  For more information, please visit www.ago.net/talks.

Along with AT WORK, the AGO looks forward to a very exciting fall season.  Also opening are: Julian Schnabel: Art and Film on September 1, Shary Boyle: Flesh and Blood on September 15, The Grange Prize Exhibition 2010 on September 22, and Henry Moore on October 23.  Maharaja: The Splendour of India's Royal Courts, the Gallery's big-ticket fall exhibition, opens November 20.

Contemporary programming at the AGO is supported by the Canada Council for the Arts. 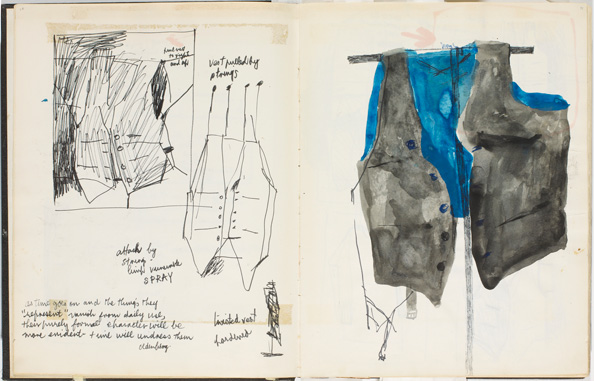 Eva Hesse was born in Hamburg, Germany in 1936.  She is known for her ground-breaking work in materials such as latex, fiberglass and plastics.  Since her death in 1970, many exhibitions of her work have been mounted across the United States and Europe, including: The Guggenheim Museum, the San Francisco Museum of Modern Art, The Drawing Center in New York, and the Jewish Museum of New York.

Betty Goodwin was born in Montreal in 1923.  For over four decades, Goodwin's work has been a cornerstone of the art community in Montreal, with numerous exhibitions mounted across Canada and internationally.  In 1995, she represented Canada at the Venice Biennial.  In 1988 and 1997, the MMFA and the AGO respectively mounted a major retrospective celebrating Goodwin's works.  She was made an Officer of the Order of Canada in 2003, and passed away in December 2008 in Montreal.  The AGO houses the most comprehensive collection of Betty Goodwin works, and is a centre for the study of her art and life.

Agnes Martin was born in Macklin, Saskatchewan in 1912, and moved to the Unites States in 1931.  Often referred to as a minimalist, Martin considered herself an abstract expressionist who's signature style is defined by emphasis upon line, grids and fields of extremely subtle colour.  Since her first solo show in 1958, she has been the subject of more than 85 solo shows and two retrospectives including the survey Agnes Martin organized by the Whitney Museum of American Art, New York.

With a permanent collection of more than 79,500 works of art, the Art Gallery of Ontario is among the most distinguished art museums in North America. In 2008, with a stunning new design by world-renowned architect Frank Gehry, the AGO opened its doors to the public amid international acclaim. Highlights include Galleria Italia, a gleaming showcase made of wood and glass running the length of an entire city block along the Gallery's façade; and the feature staircase, spiraling up through the roof of Walker Court and into the new contemporary galleries above. From the extensive Group of Seven collection to the dramatic new African art gallery; from the cutting-edge works in the Vivian & David Campbell Centre for Contemporary Art to Peter Paul Rubens' masterpiece The Massacre of The Innocents, a highlight of the celebrated Thomson Collection, there is truly something for everyone at the AGO.