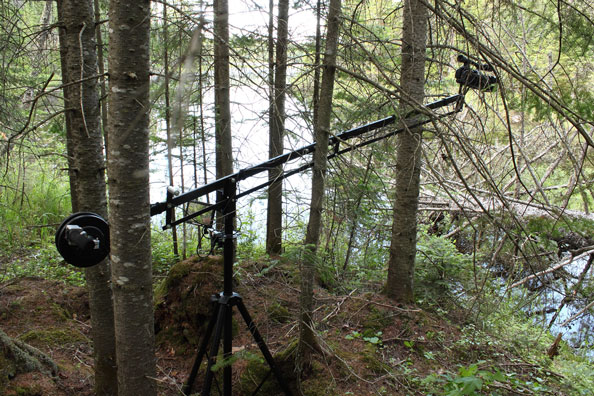 (TORONTO - March 25, 2011) Toronto-based artist Jon Sasaki will present a new installation that recontextualizes the iconic images of the Canadian landscape famously depicted by Tom Thomson and the Group of Seven. Inspired by the artist's childhood visits to the Art Gallery of Ontario (AGO) and the National Gallery of Canada, Jon Sasaki: Pine features work created and conceived on a visit to Algonquin Park, where Thomson created some of Canada's most recognizable paintings. The exhibition will be on view from April 6 through June 5, 2011.

"Like Tom Thomson, Jon Sasaki has created a series of works that resonate with the iconic Ontario landscape," says Michelle Jacques, the AGO's acting curator of Canadian art. "But the tools of Sasaki's artmaking-camera and crane-do not blend as invisibly into the surrounds of the idyllic park as Thomson's paint box once did. Sasaki‘s photographs are compelling depictions of Algonquin, but they are also a gentle critique of the sometimes uncomfortable relationship between the traditions of art history and the tools of contemporary artmaking."

Jon Sasaki: Pine launches the second year of the Art Gallery of Ontario's Toronto Now series, a rotating series of contemporary art projects that puts the focus on Toronto artists and displays their work in the free, street-facing Young Gallery. Artists previously featured in the series include Dean Baldwin, Will Munro, and Allyson Mitchell. The next installation opens June 11 and will feature work by artist Libby Hague.

A reception to celebrate the opening of Jon Sasaki: Pine will take place in the Young Gallery on Wednesday, April 6 from 5 to 7 pm. The Young Gallery is adjacent to FRANK, the AGO's signature restaurant.

ABOUT JON SASAKI
Jon Sasaki utilizes performance-for-video, objects, installations and interventions in work that mixes humor and pathos, often with gently antagonistic results. His work has been presented in recent solo exhibitions at The Doris McCarthy Gallery (University of Toronto, Scarborough), 126 (Galway, Ireland), Centre Clark (Montreal), and Latitude 53 (Edmonton). He has participated in group exhibitions at VOX (Montreal), The Vancouver Art Gallery, the Owens Art Gallery (Mount Allison University, Sackville, NB), Simon Fraser University Gallery (Burnaby, BC), as well as the 2006 and 2008 editions of Toronto's Nuit Blanche. Jon was an active member of the Instant Coffee art collective between 2002 and 2007. He lives and works in Toronto and is represented by Jessica Bradley Art + Projects.

ABOUT THE IMAGES FESTIVAL
The Images Festival is the largest festival in North America for experimental and independent moving-image culture, showcasing the innovative edge of international contemporary media art both on and off the screen through film, video, installation, music, and performance. The 24th edition of the festival runs from March 31 to April 9, 2011 in Toronto. For more information, visit imagesfestival.com.