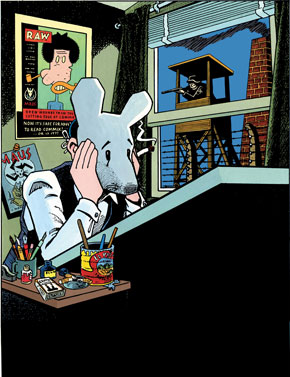 TORONTO — Art Spiegelman’s comics have been redefining a genre for more than 50 years, and this December the Art Gallery of Ontario (AGO) will pay homage to the Pulitzer Prize–winning artist with an exhibition highlighting the breadth of his career. Art Spiegelman’s CO-MIX: A Retrospective opens on Dec. 20, 2014, and runs to March 14, 2015. Embracing the belief that comics are a medium for personal expression, Spiegelman once noted, “Spiegel means mirror in German, so what sounds like one more Jewish name co-mixes languages to form a sentence: Art mirrors man.”

A tireless innovator who is unafraid to tackle difficult subject matter, Spiegelman has drawn inspiration from a wide range of sources in his work including politics, the Holocaust, Cubism and hard-boiled detective fiction. Maus, a two-volume graphic novel that recounts his parents’ life in Nazi-occupied Poland and later at Auschwitz, was the first and only work of its genre to win the Pulitzer Prize, in 1992. The AGO’s presentation of Art Spiegelman’s CO-MIX: A Retrospective will display original manuscripts of Maus, rarely seen due to their fragility.

The exhibition also features 300 works on paper ranging from trading cards to magazine covers, including:

The final section of the exhibition emphasizes Spiegelman’s recent multimedia projects including Hapless Hooligan — an innovative fusion of performance and animation produced in collaboration with Connecticut-based dance troupe Pilobolus — and It Was Today, Only Yesterday, a 50-foot painted-glass mural he designed for his alma mater, New York’s High School of Art and Design.

The AGO’s installation of Art Spiegelman’s CO-MIX: A Retrospective is coordinated by curator Andrew Hunter, the Gallery’s Fredrik S. Eaton Curator, Canadian Art. "Art Spiegelman is a rare cultural figure," said Hunter. "To many, he is the most influential living cartoonist — an artist whose work transformed a genre and who has had a deep impact on broader culture. He remains a distinct creative presence and a bold critical voice, and it is a thrill to bring such a comprehensive exhibition to a city that is a centre of comic arts. Toronto has been home to many internationally acclaimed Canadian cartoonists, including Chester Brown, Seth and Nina Bunjevac, all of whom have been profoundly impacted by Art Spiegelman's comics and editorship. With the presentation of Co-Mix, the AGO acknowledges not only the great significance of Art Spiegelman, but also growing importance of comics as a defining cultural form in Toronto.”

Art Spiegelman’s CO-MIX: A Retrospective was organized for the 2012 Festival International de la Bande Dessinée in Angoulême, France, by Rina Zavagli-Mattotti and is presented at the AGO in collaboration with The Jewish Museum, New York. The exhibition has travelled to the Library of the Centre Pompidou, Paris; the Museum Ludwig, Cologne; The Jewish Museum, New York; and the Vancouver Art Gallery. The AGO is the exhibition’s only Toronto venue.

The exhibition is accompanied by a catalogue, CO-MIX: A Retrospective of Comics, Graphics, and Scraps, published by Drawn & Quarterly. Recently nominated for a Will Eisner Comic Industry Award for Best Comics-Related Book, the 120-page, full-colour, hardcover book features essays by J. Hoberman and Robert Storr. It will be available for sale in shopAGO.

Art Spiegelman’s CO-MIX: A Retrospective is included with the price of general admission and is free to AGO members. More information on the benefits of AGO membership can be found at www.ago.net/general-membership.

ABOUT ART SPIEGELMAN
Born in Stockholm in 1948, Spiegelman completed his first comics page, The Loonies, when he was only 12. Heralded by the New York Times as a “comic master,” his work has appeared in The New Yorker, the New York Times, Playboy and Harper’s. Spiegelman has been named one of the 100 Most Influential People by Time, elected to the Art Director Club’s Hall of Fame, made a Chevalier de l’Ordre des Arts et des Lettres in 2005 (promoted to Officier in 2012) and played himself on The Simpsons. Spiegelman first made a name for himself as a cartoonist and editor in Underground Comix, the graphic expression of the counterculture of the 1960s and 1970s. As he matured as an artist, Spiegelman diverged from the sex-and-drugs ethos of his peers and, in a postmodern fashion, increasingly challenged the narrative, visual and structural possibilities of comics. He also began exploring themes that dominate his work to this day: intimate personal expression, memory and history. In the 1980s Spiegelman reinvigorated underground comics by co-founding the avant-garde magazine RAW with his wife Françoise Mouly. RAW showcased the most groundbreaking graphic artists of the time and serially published chapters of the then work-in-progress, Pulitzer Prize–winning Maus. His lifelong concern with memory and personal experience has continued in his short comic-strip memoir Portrait of the Artist as a Young %@*&! (2008), and in MetaMaus (2011), a meditation on his creative process and career. Called a “stylistic switch-hitter,” Spiegelman’s versatility and encyclopedic knowledge of comics history has allowed him to adapt his visual language to many contexts and audiences.

The Art Gallery of Ontario receives additional operating support from the City of Toronto, the Canada Council for the Arts and generous contributions from AGO members, donors and private-sector partners.