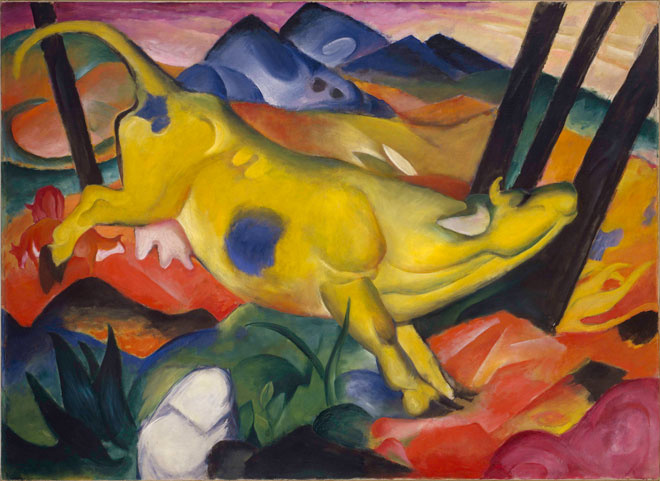 Exhibition features nearly 70 works by avant-garde artists at an explosive time in modern art, including Kandinsky, Matisse and Modigliani

(TORONTO— Feb. 28, 2013) This fall the Art Gallery of Ontario (AGO) will display a magnificent exhibition of avant-garde masterpieces from one of the world’s most prominent collections. The Great Upheaval: Masterpieces from the Guggenheim Collection, 1910-1918 features nearly 70 works from the Solomon R. Guggenheim Foundation’s collection in New York, including paintings and sculptures. The exhibition will be on view at the AGO from Nov. 30, 2013, to March 2, 2014.

Focusing on the period from 1910 to 1918, The Great Upheaval: Masterpieces from the Guggenheim Collection, 1910-1918 explores a time of tremendous creativity and artistic innovation, as artists grappled with themes of social fragmentation, technological development and the spectacle of the changing city.

Across Europe, as borders were re-drawn and mounting political tensions signalled the First World War, artists pushed ever closer towards abstraction. From Munich to Paris, in Moscow and Milan, many experimented with new forms of art and artistic collaboration, giving rise to a host of radical new styles.

Exhibited chronologically and including a number of works by critical precursors who laid the groundwork for the avant-garde movements—including Pablo Picasso, Paul Cezanne and Paul Gauguin—the exhibition includes:

With works drawn from the Guggenheim Foundation’s collection in New York, the exhibition provides a glimpse into the Foundation’s own origins as a museum. Influenced by the young German artist Hilla Rebay, in 1927 Solomon R. Guggenheim began what was to become a life-long passion for European modernism, acquiring art directly from such artists as Robert Delaunay, Albert Gleizes and Kandinsky.

AGO members will be invited to an exclusive advance preview of The Great Upheaval: Masterpieces from the Guggenheim Collection, 1910-1918 from Nov. 27 to 29, 2013. As with all special exhibitions, AGO members receive free admission and advance VIP access to the exhibition, among other discounts and benefits. More information on AGO membership can be found at www.ago.net/general-membership.

This exhibition has been organized by the Solomon R. Guggenheim Foundation, New York.

ABOUT THE SOLOMON R. GUGGENHEIM FOUNDATION
Founded in 1937, the Solomon R. Guggenheim Foundation is dedicated to promoting the understanding and appreciation of art, primarily of the modern and contemporary periods, through exhibitions, education programs, research initiatives, and publications. The Guggenheim network that began in the 1970s when the Solomon R. Guggenheim Museum, New York, was joined by the Peggy Guggenheim Collection, Venice, expanded to include the Guggenheim Museum Bilbao which opened in 1997, and the Guggenheim Abu Dhabi, currently in development. Looking to the future, the Guggenheim Foundation continues to forge international collaborations that take contemporary art, architecture, and design beyond the walls of the museum. More information about the foundation can be found at guggenheim.org.