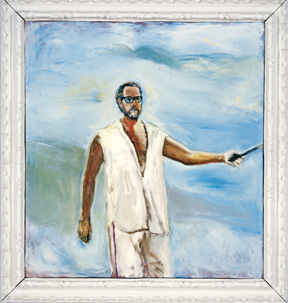 (TORONTO - May 6, 2010) American art superstar Julian Schnabel has spent his life pushing the limits of painting and crossing artistic boundaries as an award-winning filmmaker. Now, for the first time, a major retrospective examines the connections between painting and film in Schnabel's work, tracing how his paintings exist in dialogue with the cinema and revealing the rich interplay between the two media. Julian Schnabel: Art and Film will occupy the entire fifth floor of the Art Gallery of Ontario's Vivian & David Campbell Centre for Contemporary Art from September 1, 2010 through January 2, 2011.

The exhibition surveys Schnabel's work as a painter from the mid-1970s to the present and features more than 25 key works, including: several celebrated plate paintings (The Patients and the Doctors, 1978); paintings on velvet (Portrait of Andy Warhol, 1982) and sailcloth (Jane Birkin #2, 1990); monumental 22-by-22-foot canvasses (Anno Domini, 1990); and recent gesso-and-ink paintings on polyester, including examples from the 2006 Surfing Paintings series that Schnabel dedicated to legendary Italian filmmaker Bernardo Bertolucci. Other key cinematic figures on display include Marlon Brando, Albert Finney, Dennis Hopper, Gary Oldman, Mickey Rourke, Christopher Walken, and Rula Jebreal, with whom he wrote the screenplay for his newest film, Miral, which is based on her novel.

"The AGO is committed to examining great works of art from innovative and thought-provoking new perspectives," says Matthew Teitelbaum, the AGO's Michael and Sonja Koerner Director, and CEO. "Julian Schnabel is one of the world's leading artists, and the AGO is excited to offer this invigorating new context in which to consider his unique and dynamic vision."

"The show traces a personal connection to these people who worked in another practice than painting, often on both sides of the camera," says Schnabel. "Film is like a world outside of this world. Painting is like that too. When we are attracted to the imagination of a work, we pick a world that we prefer to live in."

"It has become abundantly clear, as Julian Schnabel's painterly vision has evolved, that cinema has served to germinate his pictorial imagination, inspiring his paintings in diverse and dynamic ways," says AGO curator of modern and contemporary art David Moos. "Julian Schnabel: Art and Film poses cinema as a connective force, coiling through his entire oeuvre and serving to link together formally disparate work via this shared theme."

Schnabel will visit the AGO to celebrate the exhibition's opening, and will appear in conversation with Moos at a public talk on September 15. Four of Schnabel's films - Basquiat (1996), Before Night Falls (2001), Lou Reed: Berlin (2007) and The Diving Bell and the Butterfly (2007) - will screen throughout the exhibition's run. All screenings take place in the AGO's Jackman Hall. Also, on August 26, Schnabel will appear at TIFF Cinematheque to introduce his Carte Blanche selection, Hector Babenco's Pixote (1981), and Before Night Falls. 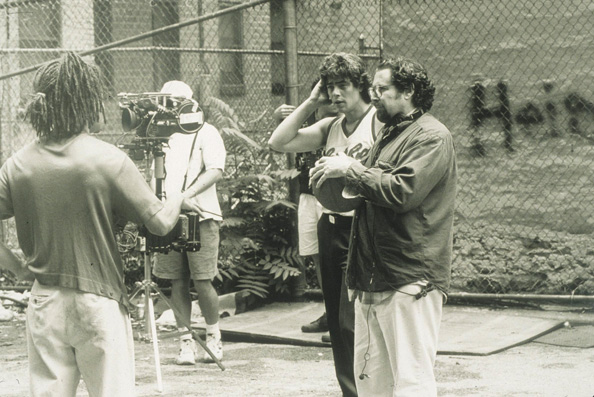 A catalogue, Julian Schnabel: Art and Film, will be published in conjunction with the exhibition. The 368-page volume surveys Schnabel's career to date, juxtaposing his painterly production with his critically acclaimed films. The scripts of each of his four feature films will be included, punctuated with stills chosen by Schnabel. David Moos will write the introduction and will also conduct a dialogue with Schnabel about the relationship between painting and film in his practice. The catalogue ($40) will be available September 1 at shopAGO. It is co-published with Distributed Art Publishers, New York.

Those eager for an earlier glimpse of Schnabel's work are in luck, as the AGO has installed a 2007 portrait of Bella and Lolita Nash, the twin daughters of Canadian-born NBA star Steve Nash and his wife Alejandra. Portrait of Bella and Lolita is on display on the Gallery's main floor. The work will be installed until January 2, 2011, and is accompanied by video footage of Schnabel and Nash reflecting on the process of the painting's creation.

Contemporary programming at the Art Gallery of Ontario is supported by the Canada Council for the Arts.

Julian Schnabel was born and raised in Brooklyn, New York. His first solo show was at the Contemporary Arts Museum in Houston in 1976, but it was with his 1979 exhibition at the Mary Boone Gallery in New York that Schnabel first asserted his presence as the figurehead of new painting declaring its unbridled possibilities. Retrospectives of his work have been mounted by Tate Gallery, London (1983), the Whitney Museum of American Art (1987), Museo Nacionale Centro de Arte Reina Sophia, Madrid (2004), and Centre Pompidou among many others. He made his cinematic debut in 1996 with his account of the life of Jean-Michel Basquiat, which starred Jeffrey Wright, David Bowie, Gary Oldman and Dennis Hopper. The Diving Bell and the Butterfly earned him Best Director both at the Cannes Film Festival and the Golden Globes, and four Academy Award nominations including best director.