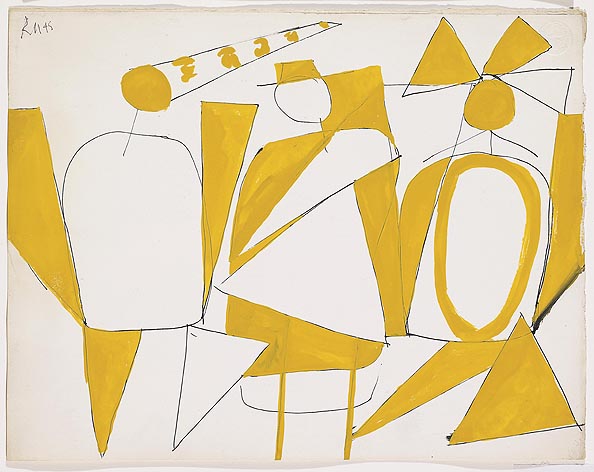 “Nothing as drastic an innovation as abstract art could have come into existence,
save as the consequence of a most profound, relentless, unquenchable need.
Abstract art is an effort to close the void that modern men feel.”
-- Robert Motherwell

(TORONTO – June 23, 2011) The Art Gallery of Ontario (AGO) continues to celebrate the Abstract Expressionist movement with an exhibition of drawings by Robert Motherwell. Painting on Paper: The Drawings of Robert Motherwell, on view June 25 through December 11, 2011, showcases 55 works from the AGO collection, which houses one of the largest public holdings of drawings by Motherwell.

“This exhibition gives visitors the opportunity to explore the mind and works of Motherwell, an eloquent and passionate Abstract Expressionist,” says Matthew Teitelbaum, the AGO’s Michael and Sonja Koerner Director and CEO. “Painting on Paper enriches the Abstract Expressionist New York experience at the AGO, giving visitors an in-depth look at the artistic process and evolution of one of the movement’s major figures.”

Curated by Brenda Rix, the AGO’s assistant curator of prints and drawings, Painting on Paper demonstrates how Motherwell’s motifs were imagined, refined and revisited over the span of his career by organizing the collection into several major chronological themes, ranging from the 1940s to the 1970s. The works on display were selected primarily from 74 drawings and paintings by Motherwell acquired by the AGO in 1998.

“Motherwell aims to express human feelings and the human spirit through gestural lines and bold forms,” says Rix. “His painterly drawings, executed on a wide variety of papers, reveal an admiration for the unique textures and tactile surfaces of paper.”

Painting on Paper augments Abstract Expressionist New York: Masterpieces from The Museum of Modern Art, the AGO’s major summer exhibition, which features three paintings and one drawing by Motherwell, exhibited alongside era-defining works by Jackson Pollock, Mark Rothko and Willem de Kooning, among others.


ABOUT ROBERT MOTHERWELL
Robert Motherwell (1915-1991) was a central figure in the development of Abstract Expressionism, a radical art movement originating in New York in the 1940s. He believed that ideas, feelings and the subconscious were best communicated through the bold forms and gestural lines of abstract art. An articulate speaker, scholar and prolific writer, he became a passionate spokesperson for the Abstract Expressionists. Drawings played an essential role in the gestation and evolution of his central themes and core visual ideas.

ABOUT THE AGO
With a permanent collection of more than 80,000 works of art, the Art Gallery of Ontario is among the most distinguished art museums in North America. In 2008, with a stunning new design by world-renowned architect Frank Gehry, the AGO opened its doors to the public amid international acclaim. Highlights include Galleria Italia, a gleaming showcase made of wood and glass running the length of an entire city block, along the Gallery’s façade, and the feature staircase, spiralling up through the roof of Walker Court and into the new contemporary galleries above. From the extensive Group of Seven collection to the dramatic African art gallery, from the cutting-edge works in the contemporary tower to Peter Paul Rubens’ masterpiece The Massacre of The Innocents, a highlight of the celebrated Thomson Collection, there is truly something for everyone at the AGO.

The Art Gallery of Ontario is funded in part by the Ontario Ministry of Tourism and Culture. Additional operating support is received from the Volunteers of the AGO, the City of Toronto, the Department of Canadian Heritage and the Canada Council for the Arts.