AGO Welcomes Margaux Williamson as Next Artist-in-Residence 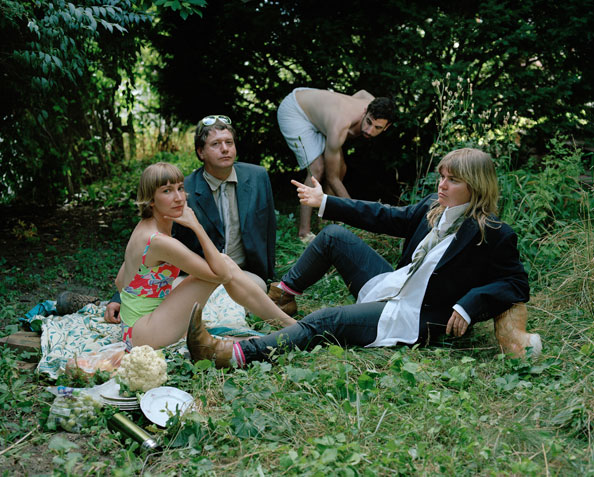 (TORONTO – Feb. 2, 2012) The Art Gallery of Ontario (AGO) is delighted to announce Margaux Williamson as its next artist-in-residence. The Toronto-based contemporary artist will be based in the Gallery's Weston Family Learning Centre through the end of March 2012.

The AGO's Artist-in-Residence Program, the first of its kind at a major Canadian art museum, hosts as many as six artists each year for eight-week terms.

Williamson will explore how to ground the limitless imagination that is possible through art—through painting, storytelling and movie making—within the pleasures and limitations of the real world. She will develop new performative and video works, pursuing notions of tolerance and conflict and people's different ideas about where bad things originate—from within themselves or from somewhere far away.

"It's exciting to have Margaux Williamson working here in our studios at the AGO as she develops new painting, video, and performance works," says Ann Marie Peña, who organizes the Artist-in-Residence Program. "There is something very special about being invited into an artist's process and taking part in the development of her vernacular of storytelling and movie making."

The AGO launched its artist-in-residence program in fall 2011, with Toronto's Paul Butler taking over a dedicated studio in the newly built Weston Family Learning Centre. During his time at the AGO, Butler designed a public program called Post-Post Graduate Studies (PPGS) that ran as an alternative art school inspired by the writings of Ernesto Pujol and art school models like The Mountain School of Arts.

For more information about the program, please visit www.ago.net/artist-in-residence.

Williamson will be present for a special public screening of her 2010 movie, Teenager Hamlet, on March 22 from 7 to 9 p.m., in Jackman Hall at the AGO.

ABOUT MARGAUX WILLIAMSON
Born in Pittsburgh but now living in Toronto, Margaux Willliamson has exhibited paintings at Katharine Mulherin Contemporary Art Projects in Toronto, at Marvelli Gallery in New York and at Fette's Gallery in Los Angeles. She premiered her first movie project, Teenager Hamlet, at the 2008 Toronto International Film Festival and a DVD variation on that project was distributed in Canada in the fall of 2010 and the U.S. in 2011. Her work has been featured by the National Post, Eye Weekly, the New York Times, the Artfag and Canadian Art magazine, among others. In 2010 Williamson created the blog Movie Is My Favourite Word, and since then helped found, alongside Carl Wilson and Chris Randle, the cultural review site Back to the World. In 2012, Williamson will be contributing movie reviews for The Believer magazine.

The AGO's Artist-in-Residence Program is generously supported by its lead sponsor, Partners in Art.

ABOUT THE AGO
With a permanent collection of more than 80,000 works of art, the Art Gallery of Ontario is among the most distinguished art museums in North America. In 2008, with a stunning new design by world-renowned architect Frank Gehry, the AGO opened its doors to the public amid international acclaim. Architectural highlights include Galleria Italia, a gleaming showcase made of wood and glass running the length of an entire city block, along the Gallery's facade; and the feature staircase, spiralling up through the roof of Walker Court and into the new contemporary galleries above. From the extensive Group of Seven collection to the dramatic African art gallery; from the cutting-edge works in the contemporary tower to Peter Paul Rubens' masterpiece The Massacre of The Innocents, a highlight of the celebrated Thomson Collection, there is truly something for everyone at the Art Gallery of Ontario.

The Art Gallery of Ontario is funded in part by the Ontario Ministry of Tourism and Culture. Additional operating support is received from the City of Toronto, the Canada Council for the Arts and generous contributions from AGO members, donors and private-sector partners.