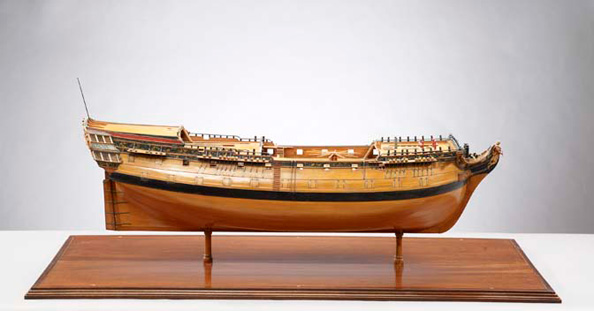 Simon Stephens: The use of medical technology such as endoscopes, boroscopes and also CT and MRI scanning machines, has been a tremendous boon for the academic world in learning more about these models, as to how they were made, the sequence of construction and also the materials used.

Until we had the use of medical instruments, we couldn’t really explore the inside of models. The only way of finding out what a model was built like was if it unfortunately was in a bad state of condition, it was falling apart.

Probably one of the most important features of this model, is that we know who made this model, which is incredibly rare. Most models were made by groups of individuals, we assume.

There’s no written evidence of this, certainly in the 17th century surviving manuscripts. As we come into the 18th century, there is slight mention but with this model we were lucky enough to retrieve a note from inside the model.

Another model had been discovered with a note inside it signed by a gentleman called George Stockwell who worked in the royal dockyard at Sheerness. And by looking at that model, the style of that model against this model, a hunch was taken that this was by the same hand.

So we went inside with an endoscope and, low and behold, we found a note inside which was signed and dated again by George Stockwell of Sheerness. This was a massive leap forward, in terms of research of models of this time. Up until this period we just didn't know who or when within reason and how these models were made.

In this case the model of the Bristol, which was a two decker, 50 gun warship of about 1774. He actually signed and dated the note, where it was made and when.

Model makers of this period, and I consider this to be the real cream of model making, this was a time when model making was at its highest. Models of this quality were being made for the King George III, who was taking a very keen interest in the navy.