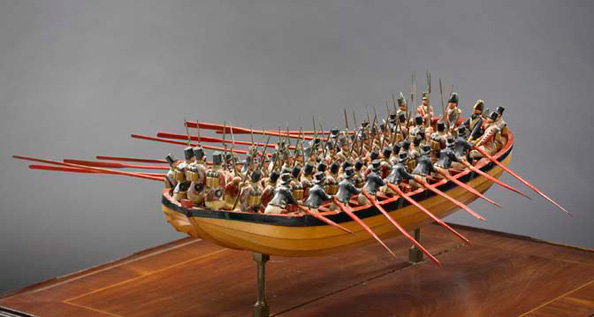 Simon Stephens: This model here in front of us is one of Ken Thomson’s favorite models. I can see why really. It is a fascinating insight into the human face of the mid 18th century. It is a lovely example of craftsmanship in terms of the hull shape, the wood used, a very warm wood.

And also you have got all these figures mounted inside the hull. You have got the marines sitting there with their rifles upright being transported ashore. You have got the crew rowing them ashore as well as the drummer and the piper in the stern beside the coxswain who is steering the boat to shore.

It is interesting. These vessels were used in large numbers, especially by the British navy when they were used in the raids on the French Coast in the late 1750’s, as well as the captures of Havana and St. Lucia.

Also, 30 of these were employed for the spearhead of General Wolfe’s attack on the Heights of Abraham in 1759. So this really was the first example of amphibious warfare by getting the troops across water, be they lakes, or across rivers, or even onto a coastline.

These boats were used under the cover of ships who were moored out just off the coast who would be bombarding the enemy battlements ashore, while the troops where being rowed ashore in these boats.

These boats were transported by transport ships. They would break down in kit form. All the inside components would be removed, so that the boats would nest inside each other and could be transported, and then they would be reconstructed at their final venue.