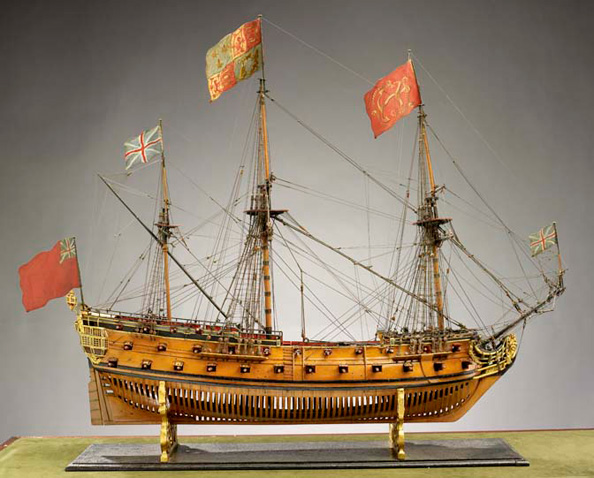 Simon Stephens: This is probably one of the rarest models you can find of this period.

The fact that it has been kept in its original display case has kept it in pristine condition, especially in terms of rigging. As you can see it is heavily decorated at the bow and the stern which is typical for this period, early 18th century.

If we look at the stern, there’s a stern gallery. And just below these central stern lanterns you will see a monogram AR which is the monogram of Queen Anne, who was Queen of England in the early 18th century. So that dates the model for us straightaway.

A very interesting point about this model is it’s rigged with its original flags. Now these are painted on card and are correct to size. Flags of this period were huge and they were measured by yardage. And you would have a Union Jack flying at the bow.

You would have the admiralty felled anchor on the foremast, the royal coat of arms on the main mast and another Union Jack on the mizzen with the red ensign on the stern and on the ensign staff.

This model has been made in what we call the Navy Board style. By that we mean that if you look at the underside of the hull, the frames are exposed. They haven’t been planked. This a stylized framing where you can look along the hull and you get this very dark and light contrast of the frames and the shadow of the frames.

This is a very good way of looking at the shape without the planks as it shows off the shape of the hull sections, which would be more difficult to see if the hull were fully planked.