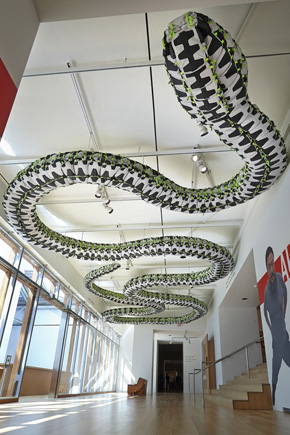 On May 12, 2008, a massive earthquake in China’s Sichuan province killed approximately 90,000 people. Ai Weiwei created this serpentine sculpture, made of backpacks, to commemorate the more than 5,000 school children who were killed when their shoddily constructed schools collapsed. Government officials refused to release the number of deaths, or acknowledge any accountability, so in 2009, Ai Weiwei launched a “citizen investigation” to ensure that neither the children nor the devastation would be forgotten. He wrote: “Can these facts be altered? The hearts stopped beating, their limbs decayed, and their shouts disappeared with their breath, can these be returned? Wave upon wave of mighty propaganda from the national state apparatus cannot erase the persistent memories of the survivors….People’s hearts will call out each of your names, the name that belonged to you will be remembered. When it is called out again, you will rise from the dead and be contented spirits.”

This work has been installed in advance of the exhibition Ai Weiwei: According to What?, opening August 17, 2013.