Amar Singh I of Mewar Submits to Prince Khurram

A conquering prince is sitting in the middle of the image; what symbols and devices are used to show his power?

Look carefully at the elements surrounding the central figures: the scenery, the people, the animals. What can they tell you about where the story takes place, who the story is about, and what is happening? 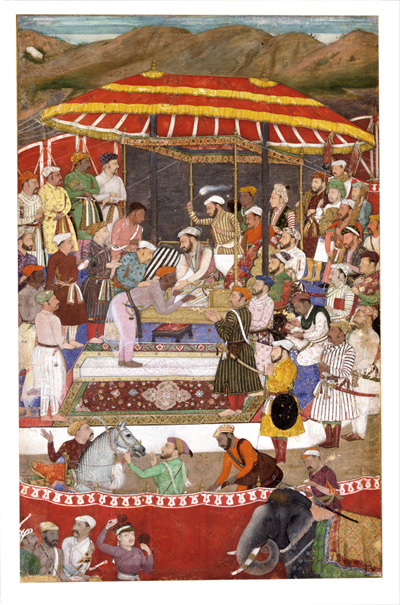 Amar Singh I of Mewar Submits to Prince Khurram

In the treaty signed by Amar Singh I was a condition that he was to provide the Mughals with 1,000 horses and horsemen when demanded.  But there was also a condition which spared Amar Singh from having to pay homage to non-Indian rulers, maintaining the dignity of the Mewars.  What would you be willing to give up in order to achieve peace?  New to Tumblr? Start here.

This image depicts a ceremony in which a Rajput ruler - Amar Singh I of the Mewar Dynasty - submits his power to Prince Khurram of the Mughals. Prince Khurram is shown in the centre of the scene under a royal canopy, attended by his chauri-bearer.  He is sitting cross-legged, as was appropriate for rulers, and is raised above Amar Singh, who stands to give his allegiance.  Surrounding the rulers are soldiers and governors from both sides of the combat, and animals significant to warfare: elephants and the horses for which the Mewars were famous.

The moment shown is the outcome of a long history of warfare between the Mewar Dynasty and the Mughals. Amar Singh was the only Rajput King who hadn’t yet signed a conciliatory treaty with the Mughals. While many Rajput rulers saw that accepting Mughal authority, with its alliances with the British, would give them wealth, status and security, the kingdom of Mewar refused to submit to foreign rule and was constantly invaded as a result. After decades of war, which took place in the hilly geography of the area, and had devastating effects on Mewar towns, temples and crops, Amar Singh finally did sign a treaty with Prince Khurran.

The artist Nanha has included himself in the painting, recording the scene to the right of the throne.