Tools of the Trade

Examine the tip and handle of this object closely. The tip is in the shape of what animal? What scene is depicted on the handle? What do you think is the purpose of this object?

What is this object made of? What do these materials communicate about the user? 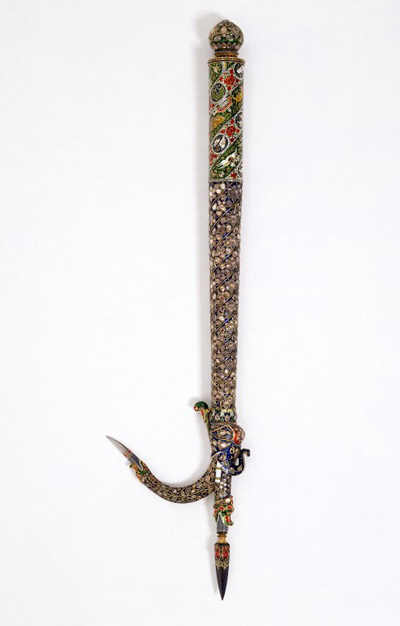 The elephant that was steered using this tool made the Maharaja feel powerful. How do you think the elephant felt?
New to Tumblr? Start here.

The tip of this object, an ankus, is in the shape of an elephant’s head. The elephant driver or mahout controlled the animal using an ankus (literally “restrain”), which is a prod or goad. In India’s royal courts, elephants were highly valued for their power and their majesty. They had pride of place in royal stables and were used in important religious and secular processions.

A hunting scene is depicted on the handle, with a rider on horseback and representations of a forest – ankuses were used especially during the hunt. Both maharajas and deities hold ankuses; the revered elephant-god Ganesha holds an ankus for example.

This ankus is made of natural colourless sapphires and enamel set in gold. This example was made in Jaipur for ceremonial use. Jaipur is a city famed for its fine enamelling, which is created by grinding precious and semi-precious stones into a fine powder and was used to decorate the engraved surfaces of gold or silver objects. The use of such valuable and ornate materials suggests that this ankus was made for an extremely important and revered person, a maharaja.