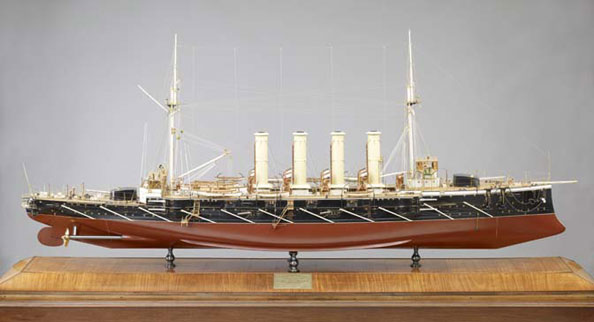 Simon Stephens: Well, I think on the sheer size of this model, this just shows you the problem faced as you come into the 20th century.

This is a very dramatic model in terms of shape and immense amount of detail on this model. Every sort of fitting and fixture is included on this model.

The obvious design features: the ram bow at the front of the ship, which is an old fall back from the late 19th century where they used to actually have a feature of ramming other vessels. Another feature you will see on the underside of the hull on the red painted area. It’s got submerged torpedo tubes so they can actually launch torpedoes from below the waterline.

The white booms running alongside the hull which is actually rigged in at the moment, they would be rigged out for a torpedo net, which was basically like a large scale form of chain male in the form of a curtain. This would stop incoming torpedoes from hitting the hull.

They would hit the net and explode there as a sort of defense mechanism. So they would rig those out away from the hull and they would go all the way around the hull if the vessel was at anchor with the fleet somewhere to protect it.

There is detail on the mast tops. You’ve got search lights, all the rigging. This being a twin screw vessel, it still had the remnants of the mast and sail, although the predominant propulsion would be the screws rather than the sail.

If we moved towards the stern, the stern gallery is beautifully created with a name on a plaque, the Hogue, which was an armored steam cruiser launched in about 1900, one of several of that class.

Predominantly they were a cruising vessel. They were given a station, either the Mediterranean, the Channel, or the Far East and they would cruise that station as it were, just flying the flag, protecting commerce, called upon if there was any action that had to be undertaken or any diplomatic incident that had to be sorted out in any way.

They were known as armored cruisers which meant the hull was armored with thick armored steel around the waterline, above and below the waterline up to the deck. In some cases, it was six inches thick. So you can imagine the sheer size and weight of these vessels was absolutely phenomenal. Again, that was to stop incoming shells and torpedoes damaging the hull and sinking the vessels.