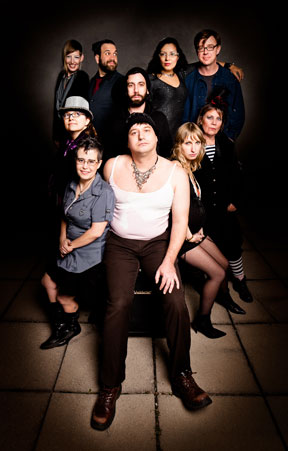 Join us for a night of music from local art-band Tomboyfriend celebrating the premiere of their new music video by Margaux Williamson.

Originally an agit-pop conceptual art project born in Toronto garages, and in front of Toronto art galleries, Tomboyfriend mixes a poet with artists, and activists with musicians. Morphing over the years into a consistently exhilarating stage show, energetic, theatrical sets alternating between dancey stompers and literate torch songs, and a purveyor of sleeper, pocket anthems, Tomboyfriend is a queer-mixed glee wonderland, drawing on Toronto's many diverse creative communities.

Known for flattening musical genres, Broadway musicals, post/disco punk, tin pan alley, garage pop and Tori-Amos-gone-Gaga all twist around a solid core of expressive minimalism, and the distinctive poly-vocals of Ryan Kamstra, Marlena Zuber, Sholem Krishtalka as well as down-at-the-heels chorale arrangements of back-up troupe The Glory Hogs. Tomboyfriend has been called "a performance-art whirlwind" (Sarah Liss 2008), ‎"some of the most emotionally relevant, lyrically poignant music you’ll find this side of just about anywhere," (This Magazine 2011) and "One charming motherfucker. But a motherfucker nonetheless," (Said the Gramophone 2006). In June 2011, This Magazine recognized Tomboyfriend as one of the 45 best (cultural outfits) in all of Canada. Their efforts also have been recognized by the likes of Spin Magazine, Slate Magazine, and New York Times magazine. Their debut full-lengther "Don't Go to School" was released on Blocks Recording Club in late 2010.