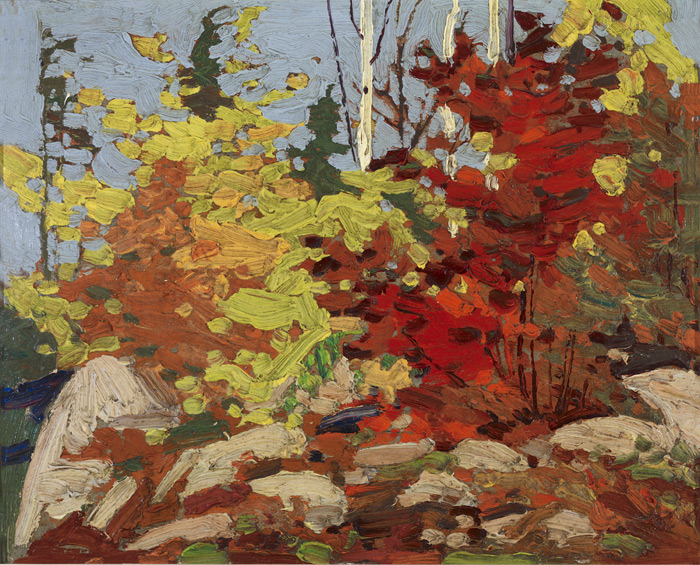 Tom Thomson (Canadian, 1877 – 1917), Autumn Scene, c. 1916, oil on panel. Collection of the Toronto District School Board. Presented by J.W. Beatty to Truman W. Kidd, art teacher at Riverdale Collegiate, 1917, later officially purchased from the artist's estate by the Toronto Board of Education.

Tom Thomson was born on a farm in Claremont Ontario in 1877, near Georgian Bay. He trained as a commercial artist in Seattle, and returned to Toronto in 1905 to begin his work at a local design firm. He started taking painting trips to Algonquin Park in 1912, and spent summers there from 1914 to 1917 as a fishing guide, fire ranger, and an artist. Thomson gave up his design job in the city and spent more time in the park, from early spring to late fall. The sketches he made during his seasons in the woods were models for larger canvasses that he painted in the winter.

In his early years Thomson was quite at home in the city. As he aged he started to prefer the wilderness to life in Toronto. He took living outdoors seriously and he was good at it. While in Toronto, Thomson tried to emulate the simple lifestyle he had grown accustomed to, possibly out of necessity, as he was not a famous artist until after his death. His shack in Toronto was similar to living in a cottage up North. Like many men of his day, Thomson built his own bunk, shelves, tables and easel. A friend recounted the time Tom made him mashed potatoes by mashing them with the bottom of a bottle. Some people in the city thought he was odd and even crass because he lived and acted like a woodsman in the city. Despite this reputation, Thomson was very social, loved people, and enjoyed having visitors. The original Thomson shack was located next to the Group of Seven’s studio near Rosedale subway station in Toronto, but was later moved north of the city. You can visit a reconstruction of Thomson’s shack in Kleinberg, at the McMichael Canadian Art Collection.

Thomson died in a canoeing accident in Algonquin Park in 1917. There are still questions about the circumstances surrounding his death, as he was an accomplished canoeist and outdoorsman. See the Find Out More section below for links to videos about Thomson, his life, death, and work.

Autumn Scene, painted around 1916, is a great example of Thomson’s fall sketches made in Algonquin Park. Thomson made his sketches in oil paint, on small pieces of wood and pulp board panels, measuring approximately 8 x 10 inches. The colours are bold and bright, and the brush strokes are visible and expressive. Viewers can see how Thomson made the painting by looking at the placement of the brush strokes. Depending on the viewing distance, the painting can look abstract (close up) or like a more realistic fall landscape (further away), with trees, rocks, bushes, and blue sky coming into clear view.

Fellow painter John Beatty was the original owner of Autumn Scene. Beatty gave this painting to Truman Kidd, a Toronto teacher at Riverdale Collegiate who in turn presented it to his school as a gift. It is possible that Thomson gave this painting to Beatty because they were such good friends. The Toronto Disctrict School Board formally purchased the work from Thomson’s estate a few years later.

Thomson was inspired by the Canadian wilderness. He loved colour, especially unusual ones. His favourite painting seasons were early spring, and autumn when the leaves started to change into vibrant colours. He loved to combine unusual colours because he said that was what nature did.

“When I take those sketches down to Toronto, the experts will all scoff at them, but these were the glows I saw.”

Group of Seven member Arthur Lismer said that Thomson looked for “moods” while others artists looked for subjects. Thomson captured feelings in his work, not just the landscape in front of him.

Thomson was convinced that he had to be one with nature to paint “moods.” Group of Seven member Lawren Harris recounted a time when Thomson ran into the heart of a brewing storm and painted vigorously for 20 minutes to capture the storm’s fury.

Although Thomson spent much of his time in Algonquin Park, he was a Toronto resident from 1905 until his death in 1917. Thomson had numerous residences in Toronto, many of which are still standing today. In addition to the famous shack next to the Rosedale Valley Studio Building, Thomson lived at: 119 Summerhill Avenue with Arthur Lismer, 66 Wellsley Street, and 99 Gerrard Street in the heart of the Ryerson University campus. Thomson’s Uncle Brodie lived at 463 Parliament Street, and Thomson visited his uncle and cousins often. Toronto was less of an urban centre at this time, and Uncle Brodie kept cows, that were milked daily by prisoners of the Don Jail. Thomson also studied in the evenings at The Ontario College of Art, now OCAD University.

The AGO has collected a number of drawings, oil sketches, and large works by Thomson, beginning in the early 1900’s, until his final year of painting in 1917. The AGO also owns The West Wind, Thomson’s most famous painting of a Jack Pine.

Q1. Thomson was determined to capture the “mood” of the Canadian landscape, in addition to its physical characteristics. Not only was it physically challenging to travel to the northern wilderness in adverse conditions, but it was a creative challenge too. Thomson wanted to capture the light, feeling, and unique colours he saw in the landscape. He did this through careful observation, and preliminary sketches. He would then take these sketches back to his Toronto studio and make larger, more detailed paintings.

Compare a sketch for Thomson’s famous painting The West Wind, with the final version of the painting. What can you learn about Thomson’s creative process? What clues does the artist leave behind? Use your own creative process as a guide.

“Thomson sought the wilderness, never seeking to tame it, but only to draw from it, its magic of tangle and season.”

Q1. Thomson returned to Algonquin Park every year from 1912 to 1917, the year of his fatal accident on Canoe Lake. During this six-year period Thomson travelled to remote areas of the 7,630 km² park on foot and by canoe to paint hundreds of oil sketches. Why do you think Thomson kept exploring the same part of Ontario for so many years? How can a familiar place become “new” each visit?

A1.Thomson explored vast undeveloped stretches of wilderness in Algonquin Park, which for the most part, was a protected area, with the exception of a few back-woods logging camps. There was a great deal to discover, and document as a painter. Thomson also explored the mood of the landscape during all four seasons, in order to capture the changes in light, colour, and landscape from fall to spring. Few painters (until Thomson and the Group of Seven) tried to capture so much of this untouched northern landscape. Thomson dedicated his short career as a painter to this pursuit.

Q2.Think of a place (urban or remote) that you keep returning to. Why do you come back to visit? What do you re-discover each time you go? Describe the mood of this place. How do you capture your experience of this place (photography, writing, drawing, other)? What can others learn by visiting?

A great deal has been written about Thomson, and his mysterious death. Explore Thomson’s life and art using this archive rich website:
www.tomthomsonart.com

A website that explores the circumstances surrounding Thomson’s death, and also recounts the history of Canada at the time. It engages students by unpacking the mystery of his accidental drowning:
www.canadianmysteries.ca