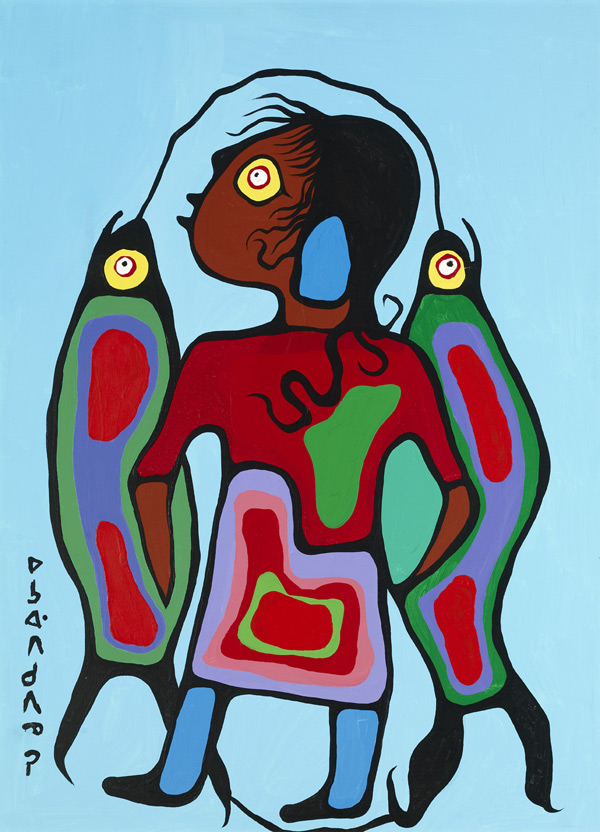 Morrisseau is an Ojibway (Anishinaabe) artist who was born and raised near Thunder Bay by his grandparents. As a young boy, he was given the traditional name Copper Thunderbird during a time of illness. Morrisseau spent a few years at a Residential school, an experience that likely inspired him to explore his roots. He wanted to understand his culture, which was largely based in oral traditions, pictographs, and objects with wildlife representations such as fish and birds or mythical creatures like thunderbirds and demons. These animals could be found on beaded bags and traditional First Nations clothing.

Morrisseau was an important contemporary artist and considered the founder of the Woodland School of painting. He was deeply driven to connect with the traditions of Ojibway (Anishinaabe) culture, not through oral history but through painting, a more modern form of expression. His work was an amalgam of tradition and modernity; he pulled from cultural traditions to create contemporary works. Morrisseau’s paintings shifted Canada’s cultural perceptions of First Nations art and brought international recognition to First Nations culture.

Norval Morrisseau was a self-taught artist. His paintings resemble ancient petroglyphs (prehistoric rock carving or painting) and the subjects are clearly outlined and appear in profile. Although he had a difficult life, he never expressed it in his artwork, which is characterized by bright and bold colours and thick black outlines. Morrisseau’s paintings are a testament of his optimistic outlook on life.

“The world in which we live in is dark, and it’s even getting darker…It needs to be brighter.”

This painting suggests a fishing scene. Fishing is one of the many ways First Nations peoples sustain themselves. It is possible that this work is connected to a memory in Morrisseau’s own life, or a traditional story from Anishinaabe culture.

Notice that the fish are as large as the boy. This implies that nature and animal life are as significant as human life. A spirit line or energy line connects the two fish together, over the boy’s head.

Inspired by Ojibway (Anishinaabe) folklore, which is passed down orally, Morriseau was curious as to how these legends would appear when translated into images.

“... there’s lots of stories that are told in Ojibway. But that wasn’t enough for me. I wanted to draw them … I would be glad to paint them just for people to see.”

The Annishinaabe First Nation is strongly connected to nature, both environmentally and spiritually. Traditionally, they provided for themselves through hunting, fishing and gathering. A number of legends and folktales explore traditional ways of life and spiritual beliefs, some of which are represented in Morrisseau’s paintings. Many of his works, including Boy With Fish show a strong connection to the natural world, and his cultural heritage. Morrisseau was also influenced by the rock and birch bark paintings his ancestors painted, along with their material culture, such as beaded bags and clothing.

Like many contemporary artists rooted in cultural traditions, Morrisseau was criticized by some for sharing Ojibway stories in his paintings. For many, these legends are more than just stories, they are powerful medicine.

Morrisseau first exhibited in Toronto in the 1960’s at the Pollock Gallery, which is now closed.

His work is part of many public and private collections, and is often on display. You can view an original Morrisseau at the Art Gallery of Ontario (AGO) and at the TD Centre, 356 Dundas Street West, Toronto, a few blocks east of the gallery.

The McMichael Canadian Art Collection in Kleinberg, Ontario also has an extensive collection of Morrisseau’s paintings.

The AGO owns a number of works by Morrisseau. Currently on display is the popular series Man Changing into Thunderbird, 1977, on loan from a private collector. This series depicts the artist transforming into a Thunderbird in a succession of large painted canvas panels. This work was completed as part of his recovery from illness, under the guidance of a Shaman (medicine man or woman).

DIGGING DEEPER INTO THE WORK

Q1. Where does this scene take place? What would happen if we changed the background colour? How would this change your interpretation of the story?

Q2. Who might the person in the middle be? Why are the fish so big? What is the relationship between the person and the fish?

Q3. People sometimes describe Morrisseau’s artwork as looking through an X-Ray. Do you agree? Use elements of the painting to support your answer.

Q4. Why do you think he was he referred to as the “Picasso of the North”? What similarities or differences do you see between Morrisseau’s work, and Picasso’s?

Q1. How does Morrisseau illustrate the Ojibway connection to nature in this painting?

Q2. Look at this painting and other Morrisseau pieces. How important do you think nature is in Ojibway culture? What can you learn about the environment that traditional Ojibway lived in from looking at Morrisseau’s artwork?

Q1. Discuss the various formats for storytelling. How many different vehicles for legends and stories can you think of? Be sure to include traditional and contemporary forms (like oral traditions and computer-generated films).

Read an Ojibway legend aloud to the class. Ask the class to visualize and draw/paint what they see in their minds in a single painting. Keep the results a secret and do not share the artwork until everyone is finished.

Q2. Did everyone see the same images, colours, characters and scenes? Why was everyone’s artwork so different? Describe the differences you see in the variations. What impact do these different interpretations have on the meaning of the story? Are some representations more optimistic, frightening, or fantasy-like than others? Explain.

Q3. Does Morrisseau’s painting represent the beginning, middle or end of an Ojibway legend? What do you think happens before or after?

See if you can find out more about related Ojibway legends.

Q1. Artwork tells a great deal about the cultural beliefs and values of a group of people. Gather several Morrisseau images online from searching the internet, and identify constant themes in Ojibway culture. What is important to the Ojibway First Nations? What can you see in the artwork that supports your answer? Be sure to follow up with research into Ojibway beliefs to ensure your assumptions are correct.

Q2. Morrisseau also used his artwork to express historical and present day conflicts experienced by the First Nations. What kinds of conflict can you see represented in his work?

Create a piece of artwork that symbolically illustrates a present day conflict. What conflict will you choose? What artistic style would you use to bring awareness to your cause? Will your artwork suggest a solution to the conflict? Why or why not?