Brian Jungen Wins the 2010 Gershon Iskowitz Prize at the AGO 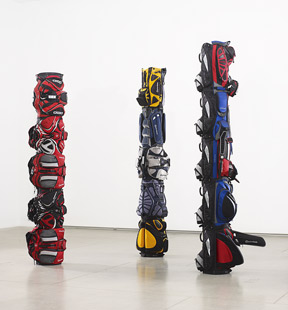 (TORONTO - April 14, 2010) Internationally renowned Canadian artist Brian Jungen is the recipient of the 2010 Gershon Iskowitz Prize at the AGO for his outstanding contribution to visual arts in Canada. The Gershon Iskowitz Foundation and the AGO will celebrate the $25,000 prize at a public reception on May 6, and the AGO will mount an exhibition of Jungen's work in the coming year.

Born in 1970 in Fort St. John, British Columbia, to a Swiss father and a Dunne-za mother, Jungen has risen to prominence over the last decade by creating artwork that recasts traditional Indian symbology using ordinary objects such as plastic lawn chairs, golf bags, and Nike Air Jordans. He has exhibited extensively in Canada and internationally in venues including Tate Modern, the Vancouver Art Gallery, and the Smithsonian's National Museum of the American Indian, which is currently staging a major retrospective of Jungen's work.

"Over the past decade, Brian Jungen has emerged as a leading Canadian artist of international significance," says David Moos, the AGO's curator of modern and contemporary art. "His work forces a reconsideration of the everyday object, which he infuses with sociopolitical commentary, historic symbology, and an ingenious sense of play."

The AGO currently holds four works by Jungen in its collection: Prototype for New Understanding #6 (1999), a work from Jungen's celebrated Prototypes series in which the artist transformed Nike Air Jordan sneakers into masks connoting the colours and styles of those of the Aboriginal Northwest Coast; and 1960, 1970, and 1980, three large-scale sculptures made from golf bags and assuming the form of totem poles.

Jungen was selected by the board of the Gershon Iskowitz Foundation. Board member Jay Smith says that Jungen was chosen "because of his singular vision, his technical innovation, and his stunning narratives, which are at once provocative, troubling, whimsical, and complex. Brian Jungen is wholly deserving of this and every accolade sure to come his way in the future."

The May 6 reception celebrating Jungen's win will be held in Baillie Court, and Jungen will be delivering a talk about his work at 7 pm. The talk is free and open to the public. More information can be found at www.ago.net/lectures-and-talks.

The Gershon Iskowitz Prize at the AGO was last awarded in December 2009 to Toronto-based interdisciplinary artist Shary Boyle. Beginning this year, the winner of the annual prize will be announced in the spring, with an exhibition by the winning artist to follow within a calendar year. An exhibition of Boyle's work will open at the AGO this September. Françoise Sullivan: Inner Force - Winner of the 2008 Gershon Iskowitz Prize at the AGO is on view at the Gallery until May 30.

In 2009, a commemorative volume celebrating the first 20 years of the Iskowitz Prize was released. Titled The Gershon Iskowitz Prize: 1986-2006, the 112-page book spotlights the first 21 artists to receive the prize, including Gathie Falk, Betty Goodwin, Rodney Graham, Vera Frenkel and General Idea. It is available for purchase at shopAGO.

ABOUT THE ISKOWITZ PRIZE AT THE AGO

In 2007, the AGO and the Iskowitz Foundation joined forces to raise awareness of the visual arts in Canada with the renaming of the annual award established twenty years ago by Canadian painter Gershon Iskowitz (1921-1988). Iskowitz recognized the importance of grants to the development of artists and acknowledged that a grant from the Canada Council in 1967 enabled him to formalize his distinctive style. The AGO is home to the artist's archives, which include early works on paper, sketchbooks and memorabilia, and holds 29 paintings by Iskowitz (spanning the period from 1948 to 1987) in its permanent collection.