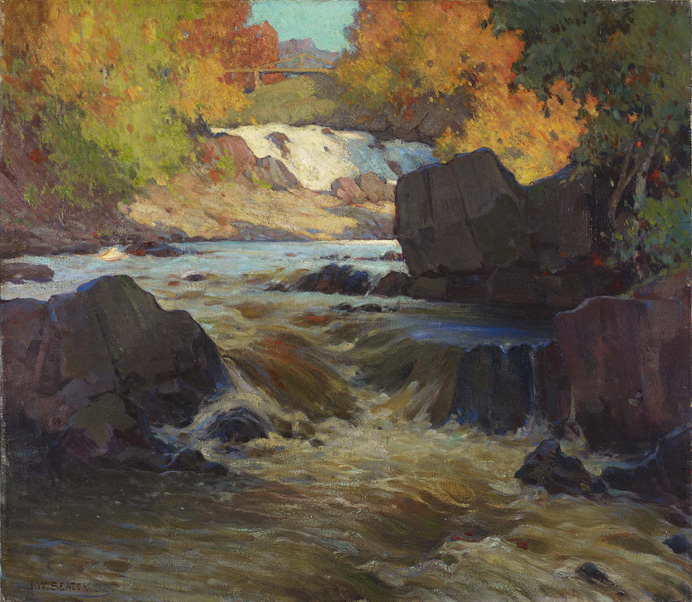 John William Beatty grew up with 9 brothers and sisters in Toronto. His behaviour in school was unruly and he was later expelled from school at 13, dropping out to become an apprentice engraver at an engraving house. At 16, he became a bugle boy for the Ontario Militiamen in the Riel Rebellion in Manitoba, playing the bugle, a trumpet-like instrument used to summon troops at the beginning and end of the day. Afterwards, he returned to Toronto to become a fireman. He was a minor celebrity and became famously known as ‘Toronto’s painting fireman’, often performing stunts for small crowds at the fire hall. At 30, Beatty and his wife left for Paris to study art. He did not like the surrealist styles encouraged in Paris at the time and this made him want to paint Canada’s natural landscape.

Beatty was one of four Canadian war artists sent to Europe during World War I to paint important battlefields, including Ypres, Amien, and Vimy Ridge, and the soldiers’ camps. Beatty was very disappointed because he wasn’t allowed to fight due to his age (he was in his mid 40’s at the time).

After the war, Beatty returned to Toronto to take on a number of local commissions, including large public murals. He also started teaching, and continued his landscape paintings until 1941, the year he died.

Beatty excelled at painting water and one critic suggests that this painting is one of Beatty’s best pieces. Many articles that refer to this painting say that Brooks Falls is a work that captures Beatty’s skills and talents.

The painting illustrates Brooks Falls in Parry Sound, Ontario, which is a part of the Magnetawan River that runs through Algonquin Park. The river has a series of falls and rapids and empties into Georgian Bay.

A photo gallery of the Brooks Falls area today

History of the Magnetawan River

In the 1800’s, the Magnetawan River was used as a logging river taking lumber downstream to saw mills. Locks were built in the late 19th century on the river for steamboats to travel further down the river from the railway station at Burk's Falls and are still in use today.

Like many of the other artists in this collection, Beatty was inspired by the outdoors. Beatty and Tom Thomson were best friends, often taking sketching trips up North together. One of Beatty’s favourite sources of inspiration was Algonquin Park and its surrounding areas. He was devastated when Thompson died unexpectedly during a solo canoe trip in the park. Many art critics describe Thomson as the predecessor and source of inspiration for the young painters destined to becoming the Group of Seven.

Many of these artists have connections to the AGO and the city of Toronto. Some artists lived, worked and exhibited in the city, and others created public murals that are still intact today.

John William Beatty was born in Toronto in 1869. He went to school at Ryerson Polytechnic Institute (now Ryerson University) on Phoebe Street. After returning from the militia, he worked at the Lombard Street Fire Hall, which is now the home of Gilda’s Club, a cancer support centre named after the late comic actress Gilda Radner.

In 1909, Beatty rented a studio at 36 Toronto Street. During that time, he painted a series of famous murals at Rosedale Public School. People were becoming more aware of the positive influences art and artmaking had on children. Local parents fundraised to have Beatty paint a set of murals entitled Spring, Summer and Autumn in a new kindergarten classroom located in the Don Valley. Completed in 1910, one reporter called it the prettiest classroom in Toronto.

Beatty was also an art educator, who taught summer school at what was then called the Ontario College of Art (now called the Ontario College of Art and Design University) at the same time he painted Brooks Falls. Cited as one of his most accomplished works, Brooks Falls was exhibited at Eaton’s College Street Art Gallery in 1941, the same year that Beatty died.

The AGO has collected a number of works by Beatty, beginning in 1938, with a recent donation in 2007.

Q1. Beatty liked to illustrate the relationship between people and nature. Unlike his friend Tom Thomson who went far north to paint undisturbed natural scenes, Beatty liked to suggest in his paintings that these places were inhabited by people. What do you see in Brooks Falls that suggests people live nearby?

A1. There is a bridge in the background of Brooks Falls, suggesting a nearby town, road or railway.

Q2. Beatty was known for his ability to paint water, capturing its vitality and flow. What techniques did Beatty use to do this? Compare Beatty’s approach to painting water with that of other artists in this collection. What differences do you notice?

How would you choose to portray water if you were painting a waterfall? What artistic choices would you make, and why?

Q1. What inspires you to create art? Think about your own sources of artistic inspiration.

Write a paragraph about what inspires you to create art and why you find it inspiring.

Q2. Are there places that you like to go to create or feel inspired? Describe, draw, paint, photograph, or make a multimedia presentation about your inspired place. With a partner, share and discuss your spaces together. What are the similarities and differences between your spaces? How did you feel creating artwork in a new space?

With your partner, present your findings to the class. Include where you went, the artwork you created, and what you learned through this experience.

Beatty’s work was featured in a 2001 exhibition showcasing the work of war artists. Check out this posting from the AGO archives: