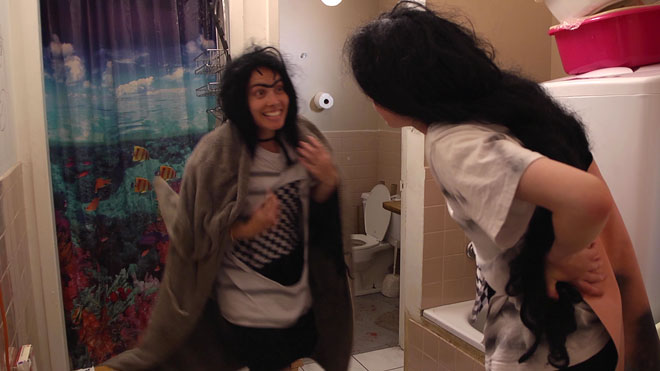 Join us for the world premiere of Bugs, the first feature-length film by Life of a Craphead (Amy Lam and Jon McCurley). Bugs is a satire about a bug society and its most successful family. The story follows the Bug leader, Shay, who is retiring and has to choose which one of his three nieces will take over the bug version of Toronto. The film features a fun and scrappy aesthetic designed by artist Laura McCoy and a large and hilarious cast of other artists and comedians.

Life of a Craphead is the collaboration of Amy Lam and Jon McCurley since 2006. They were artists-in-residence at the Art Gallery of Ontario in the winter of 2013 and produced the Life of a Craphead Fifty Year Retrospective, 2006-2056, an exhibition of all the work they will ever make. Life of a Craphead also run and host the popular monthly performance art show Doored, which recently toured to New York and Rotterdam. Their work has been featured in Canadian Art, C Magazine, and Art in America. They live and work in Toronto, Canada. www.lifeofacraphead.com