Canadian Exclusive: The Great Kings of India Hold Court at the AGO 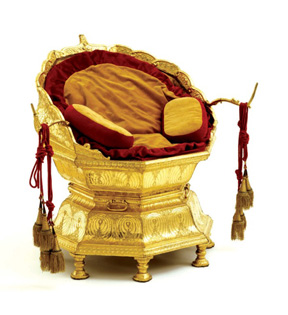 First exhibition to comprehensively explore the world of the Maharajas

(Toronto - July 7, 2010)  This fall the Art Gallery of Ontario opens its doors to the magnificent world of India's great kings.  Maharaja: The Splendour of India's Royal Courts, organized in collaboration with the Victoria & Albert Museum, London, will make its sole Canadian stop at the AGO, with a members-only preview starting November 17 and public viewing from November 20, 2010 to February 27, 2011.  The exhibition features over 200 opulent objects, including paintings, tapestry, thrones, weapons, and jewels, most on view in North America for the first time.

Spanning the last 300 years of India's culture - from the beginning of the 18th century, to the end of British rule in 1947, and concluding with a look at the legacy of the Maharajas today - the exhibition examines the social and historical role of these kings and their courts, bringing to light the ancient royal traditions that have permeated the lives of descendants worldwide.

The four galleries of the AGO's Sam and Ayala Zacks Pavilion will be devoted to the exhibition, with works on loan from the Victoria & Albert Museum, Qatar Museums Authority, British Museum, National Gallery of Canada, Virginia Museum of Fine Arts, Asian Art Museum, Cartier, the  National Portrait Gallery, and various private lenders.

Among the 200 objects on view are some of India's greatest treasures, including the magnificent Patiala Necklace, part of the largest single commission that the French house of Cartier has ever executed.  Completed in 1928 and restored in 2002, this piece of ceremonial jewellery contains 2,930 diamonds and weighs almost one thousand carats.

Other key works in the show include the famed throne once belonging to Maharaja Ranjit Singh, a life-sized model elephant adorned with textiles and trappings and accompanied by a silver howdah from the early 19th century, a carriage entirely made of silver commissioned by the Maharaja of Bhavnagar, paintings of spectacular royal processions, royal costumes and traditional dress worn by great kings and queens, ceremonial weapons including daggers, swords and matchlock guns, and prized photographs by artists including Man Ray and Cecil Beaton.

"Many of the arts of India exist today as a result of the patronage of the Maharajas," says Dr. Stephen Inglis, adjunct curator of the exhibition and curator emeritus from the Canadian Museum of Civilization.  "Their support of artists resulted in splendid and beautiful objects symbolic of royal status, power and identity, as well as the survival of many forms of dance and music. Because of their support, these traditions lived on, and now allow us the opportunity to stage such an amazing display of art and artifacts."

"Continuing to broaden the definition of art, the AGO is thrilled to provide the opportunity for people in Toronto and the GTA to experience this unforgettable history, and the social and political happenings of that time," says Matthew Teitelbaum, AGO Director and CEO. "This is an exhibition of exploration and education.  We look forward to sharing with the communities that are so directly in touch with this extraordinary culture."

The AGO Community Ambassador Team, a group of volunteers who hit the streets to spread the word about what's going on at the Gallery, will be celebrating the coming of this exciting exhibition at numerous festivals around the city.  Visit the team at the Mosaic Festival, July 9 to 11; the South Asian Festival on Gerrard, July 17; Masala Mehndi Masti, July 24 & 25; Panorama India Independence Day Festival, August 14; the CNE, August 19 to September 6; and Manifesto, September 25.

Tickets to the exhibition will range from $15 for youth to $26.50 for adult general admission.  Access to the Gallery's permanent collection included with admission.  For more information and exhibition details including tickets, programs and community thoughts and feedback, visit http://www.ago.net/maharaja-exhibition.

AGO members receive free admission to the exhibition.  Member's previews are scheduled to take place on November 17 and 18.  For more information on membership benefits, please visit www.ago.net/membership.

As preparations continue for the opening of this major fall show, the AGO is pleased to present a number of other exciting exhibitions to kick off the fall season:

American art superstar Julian Schnabel has spent his life pushing the limits of painting and crossing artistic boundaries as an award-winning filmmaker. For the first time, a major retrospective examines the connections between painting and film in Schnabel's work, tracing how his paintings exist in dialogue with the cinema and revealing the rich interplay between the two media. Julian Schnabel: Art and Film will occupy the entire fifth floor of the Art Gallery of Ontario's Vivian & David Campbell Centre for Contemporary Art from September 1, 2010 through January 2, 2011.

At Work features three unique exhibitions linked by a common exploration of process and labour, providing new insights into the remarkable work of three major international artists and their dedicated and focused work in the studio.  Simultaneously, the AGO presents Eva Hesse: Studioworks organized by the Fruitmarket Gallery, Edinburgh; Betty Goodwin: Work Notes, with works from the AGO's permanent and archival collections; and Agnes Martin: Work Ethic, with works on loan from the Whitney Museum of American Art. The exhibition will occupy the entire fourth floor of the Art Gallery of Ontario's Vivian & David Campbell Centre for Contemporary Art from September 22, 2010 to January 2, 2010.

Four leading-edge photographers - Josh Brand, Moyra Davey, Leslie Hewitt, and Kristan Horton - have been recognized for their excellence and chosen as finalists for the 2010 Grange Prize, a partnership between Aeroplan and the Art Gallery of Ontario. Now in its third year, The Grange Prize is Canada's largest photography prize, awarding $50,000 to the winner, and $5,000 to each of the runners-up - granting a total of $65,000 to photographic artists each year. The winner will be chosen by the public this fall, when exhibitions celebrating this year's finalists are mounted at the AGO from September 22 to November 2, 2010 and at the Museum of Contemporary Photography (MoCP) at Columbia College Chicago, this year's partner institution.  More information on the Grange Prize can be found at http://www.thegrangeprize.com/.

From October 23, 2010 to February 6, 2011, the AGO will host an exhibition that will rediscover the work of the world's greatest sculptor, Henry Moore. Organized by Tate Britain in collaboration with the Art Gallery of Ontario, Henry Moore will focus on the artist's early works from the 1920s and 30s.  It was during this time that Moore created his most radical and experimental work, establishing his initial brilliance which in turn led to future fame.

AGO Marks the Year of India with the AGO Maharaja Festival

To celebrate Maharaja: The Splendour of India’s Royal Courts, and to acknowledge 2011 as Canada’s Year of India, the Art Gallery of Ontario is hosting The AGO Maharaja Festival. From January 26 to 30, visitors will experience live performances, cooking demonstrations, henna tattooing, special exhibition tours and much more. Visitors to Maharaja age 25 and under can experience the exhibition and festival for FREE.