What would it feel like to ride in this carriage? Imagine the movement you would feel, the sounds, the smells. What clothing would you wear, what posture would you hold and what movements would you make if you were riding in it? 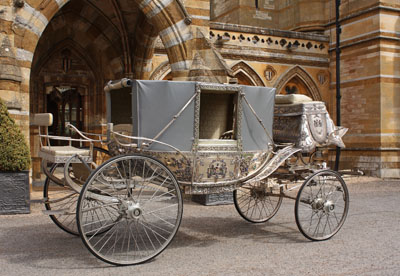 In royal processions, which remained an important public display of power and status, while elephants were still used, European modes of transport such as this carriage, known as a landau, became more popular. Later, extremely valuable cars such as the Star of India would be used as well. What kind of vehicle do you think makes a powerful impression?
New to Tumblr? Start here.

In the late 1800s when the British took control of most of India and relegated Maharajas to heads of state, many Indian rulers began to emulate western customs, acquiring the trappings of a European lifestyle as symbols of luxury and status.

Maharaja Bhavsinhji II of Bhavnagar commissioned this English-style carriage from the Fort Coach Factory in Bombay in 1915. He chose this local company instead of English carriage companies that were well established in India. While the axle comes from England, the silversmithing and enameling on the silver clad framework displays the fine craftsmanship of migrant workers from all over India who were employed by Bombay’s artisanal workshops. The decoration of enameled flowers, birds and butterflies and sculpted swans, bulldogs, lions and greyhounds make this work a masterpiece of technical virtuosity.

The maharaja’s coat of arms can be seen on the sides of the carriage. It consists of 2 bulls flanking a shield with a golden eagle. Above the shield are a helmet and a dhow, a traditional sailing vessel, which refers to Bhavnahar’s involvement with maritime trade. The motto below the coat of arms reads “Mani shya Yatna Ishawara Kripa” which means “Man’s Endeavour, God’s Grace,” embodying the Hindu philosophy that all human endeavour is separated from its reward, true reward being only bestowed through divine grace.