What can you tell about the status of the woman in the centre of this image? What sets her apart from the other figures in the scene?

Why do you think the central figure is hunting? What is the role of the other figures? 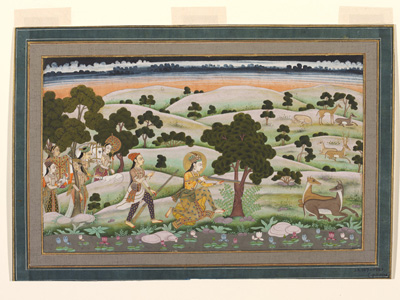 Chand Bibi was a rare case for women in the ruling classes at her time, and even rarer in the general population of India in the 16th century. Hunting or playing sports, learning to play musical instruments, going shopping or taking a walk on your own, going to school, even reading, were not considered appropriate pursuits for girls and women. Imagine what it would be like to not have any power over what you do, where you go, what you wear, or even who or when you marry. What makes a woman powerful?
New to Tumblr? Start here.

This is a posthumous image of Chand Bibi of Bijapur, a Muslim warrior queen from the 1500s who defended her realm from Mughal forces. Her status as a Queen is denoted by her elaborate and colourful clothing, her greater size in relation to the other figures in the scene, and by the nimbus around her head, signifying her divine place as a ruler.  Hunting was a pursuit appropriate for the Maharajas, as it developed the kingly attributes of strength, stealth, and strategy needed in warfare. As well as being an accomplished soldier, Chand Bibi was a skilled poet and musician and spoke many languages.

As many of the rulers of India were Muslim and Sikh, royal women often followed the rules of purdah – being strictly shielded from the gaze of men other than family members. There would be separate living quarters for women, called zenana, and when travelling women would be transported in palanquins that screened them from public view. There were exceptions to these rules, as in Chand Bibi’s case, and there are examples of royal daughters being highly educated and trained in fighting and hunting, as well as cases of women ruling as regent in the place of young heirs. Over time, as globalization developed, there was a relaxation of the rules of purdah, and many Indian Kingdoms established laws protecting and supporting the rights of girls and women.