This album includes 75 photographs made by several photographers, mostly unknown, in Japan, China and Hong Kong during the late 1800s. They depict a variety of architecture and landscape views, as well as scenes of people working and performing rituals. In this selection of 20 images from the album, you will encounter a typical travel album of its day, at a particular moment of cultural upheaval and exchange. Japan, China and Hong Kong only became accessible to merchants and travelers from Europe and North America in the late 19th century. With the traders came photographers, who catered to the tourist appetite for souvenir images.

What ideas do you get about each country by looking at these photographs? Do you believe photographs are truthful? Why or why not? 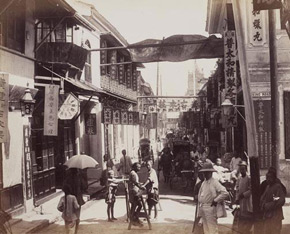 Sophie Hackett is the Assistant Curator of Photography at the Art Gallery of Ontario. Prior to this, as a writer and independent curator, she published writing in Lola, Saturday Night magazine, Xtra!, C Magazine, Canadian Art and Prefix Photo. She has curated five exhibitions independently, including The Found and the Familiar: Snapshots in Contemporary Canadian Art, co-curated with Jennifer Long (2002), Flash Forward (2005), and Wallpaper (2005). 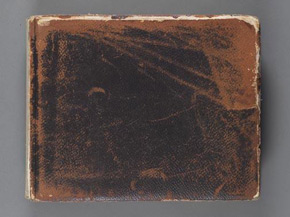 This leather-bound volume with pages of thick cardstock was designed to hold photographs roughly 20 x 25 cm. As they travelled, 19th century tourists visited the studios of local photographers and bought from a stock of images. Here, the photographs are organized by place: Japan, China, then Hong Kong. This may suggest an itinerary for the trip or it may simply have been an easy way to organize the photographs, after the fact.

The pages of this album are interchangeable, which makes it easy to add, remove or reorder them. If you look closely, you can see three hinges that connect the page to the binding. 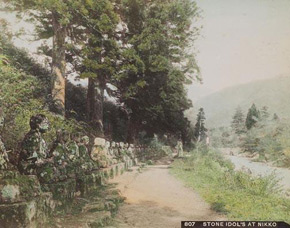 In Japan, the first experiments with photographic technology took place in Nagasaki, which was then the centre for the study of Western sciences. Pierre Rossier (Swiss, 1829–1883) arrived in the city in 1859. Rossier trained several men and provided up-to-date equipment and chemicals. He did the same in Kanagawa, Yokohama and Edo (present-day Tokyo), which contributed to a growth of photographic activity in Japan. 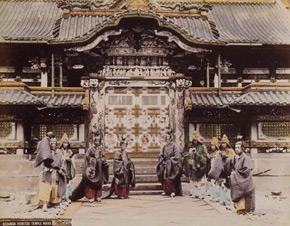 A central part of any 19th century photographer’s stock was images of monuments and architectural sites. The city of Nikko is home to the Toshugu shrine complex, which includes the mausoleums for the powerful shoguns Tokugawa Ieyasu and Iemitsu. The caption shows that the photographers were catering to English-speaking customers, interested in the culture of ancient Japan. 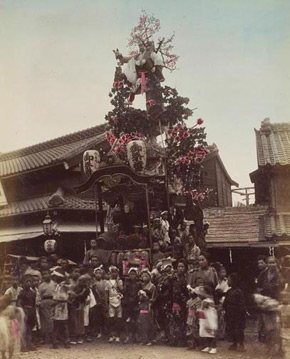 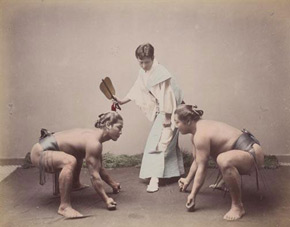 It is very difficult to determine who made many 19th-century Japanese photographs, as photographers often sold their stock of negatives to their competitors or apprentices. For instance, one of the best-known Japanese photographers, Kusakabe Kimbei (1841–1934) learned the trade with Felice Beato (British, c1825–1908) and Baron von Stillfried (Austrian, 1839–1911). Kusakabe outlasted both Beato and Stillfried, and in 1885 he acquired most of their catalogues of negatives from which he continued to issue photographs for many years. It is highly likely that this album includes prints by these notable photographers, but we will never really know. 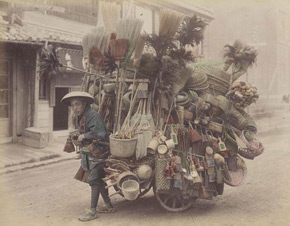 Photographic technology in the late 1800s still did not allow photographers to completely stop movement. Thus, street scenes such as this one would have been carefully staged, with attention given to preserving a sense of the vitality of street life. 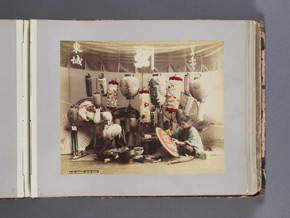 Despite the profound changes taking place in Japan at this time, the photographs in the album document none of this upheaval. Instead, photographers created scenes that reenacted the traditional ways of life many felt were fast disappearing. 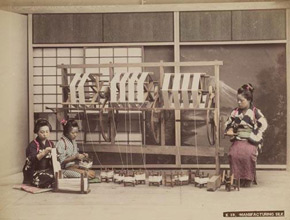 Many of the photographs in this album highlight aspects of Japanese culture such as dress, customs, the manufacturing of silk and other crafts, sumo wrestling, and the production of tea. These images would have had a profound impact on Westerners seeing them at home, forming an impression of the people and the place. 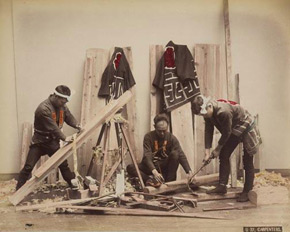 Influenced by Japanese woodblock printing, early photographers in Japan began to tint their albumen prints. Studios hired watercolourists to apply the colour. While tinting was a common practice in the West, it was often only applied to specific areas of a photograph – like the cheeks and lips of a portrait – whereas in Japan the overall tinting served to bring photographs into a long-standing aesthetic tradition of picture-making. 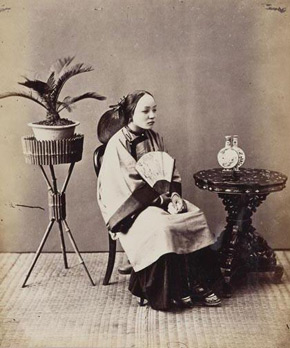 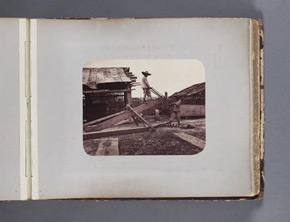 This is likely a photograph by Saunders because of the distinctive rounded corners. He also favoured the oval format. Since the album also includes a photograph of Japanese carpenters, it is possible that one of the travelling party was interested in methods of carpentry from other countries. 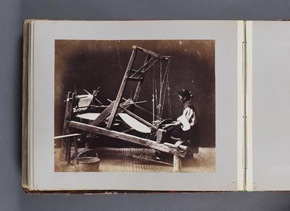 Very little is known about L.F. Fisler. He operated a studio in Shanghai and staged scenes he felt were typical of daily life, such as this one of a woman weaving. 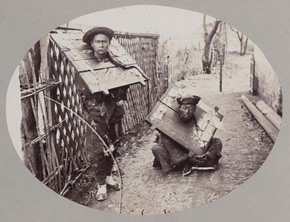 Exceptions to the staid scenes of traditional life are Saunders’s photographs of the Chinese penal system – men and women in stocks, known as the cangue, and of executions. In the 1870s, Saunders’s photographs were published in the London Illustrated News, among others, along with reports that described the stoicism of Chinese prisoners faced with execution, feeding the misconception that the Chinese were unfeeling. The oval format here, usually associated with paintings and thus perceived as more “artistic,” seems at odds with this stark subject. 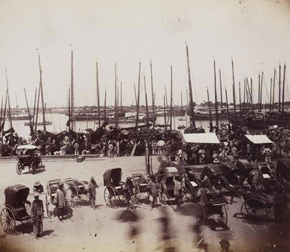 Photographic technology in the 1880s was not yet able to make split-second exposures and “freeze” action. However, this wonderful view of a bustling port, with its blurred shapes of people and rickshaws, vividly conveys a sense of the place.

The city of Canton on the Pearl River (now Guangzhou), was a busy trading port. It takes a few moments looking at this detailed scene before the foreigner, standing at the right in his pith helmet, emerges. Is he one of the travelling party or did the album creator acquire this photograph as a stand-in for their own experience? 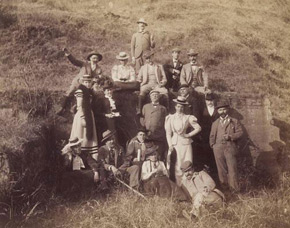 This group portrait is one of only four photographs in the album featuring members of the travelling party, likely including the assembler of this album. From their dress, they are clearly North American or European. They would have hired a photographer to document the day’s outing. 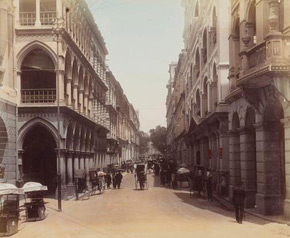 Hong Kong was a way station for many travelers and entrepreneurs. However, conditions and patronage were difficult for photographers and many were unsuccessful at maintaining their businesses. They would sell to the next adventurous soul and move on. This rapid turnover led to the establishment of The Firm (a group of up to 11 photographic enterprises), which held a sizeable collection of negatives left behind by photographers and passed along. 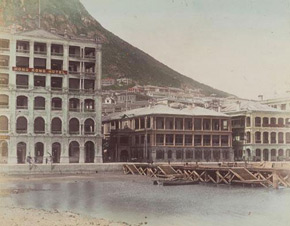 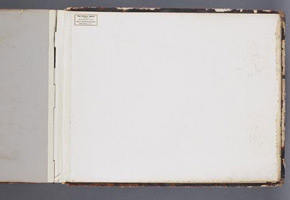 It is only once we turn to the inside back cover that we find a material clue about the album’s maker. The manufacturer’s sticker reads: The Eclipse Album / Patented / (interchangeable leaves) / Felix Reifschneider / New York, U.S.A. While Reifschneider might have sold his albums around the world, it seems more likely that he catered to a New York public, making it conceivable that the album owner was an American.

Use the following questions to promote critical thinking, discussion, or writing as you view the photographs in this collection.

It’s time to create your own album! Think about how you see the world, at home and while traveling to new places. Use the questions below as a starting point for you own work. Share your work with others as you go.