Indian Church can be read as the rapid encroachment of Western modernity on First Nations: as a formal religious institution unconnected to everyday life; as an instrument of a colonial government’s assimilation efforts; or, as an opposition to nature itself, both architecturally and ideologically. Despite these, First Nations’ actions should not be disregarded or misjudged.

During the time some of these images were created, it was considered appropriate to use the term ‘Indian’. Today we use terms like First Nations, First Peoples, or Aboriginal. If you were to reframe the term ‘Indian Church’, what name would you choose? 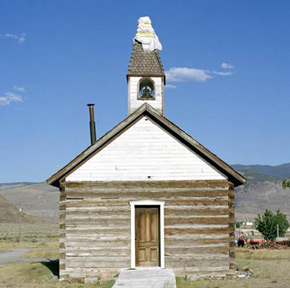 Gerald McMaster is the adjunct curator of Canadian Art at the Art Gallery of Ontario. A Plains Cree from Red Pheasant, Saskatchewan, he first studied fine art at the Institute of American Indian Arts in Santa Fe, New Mexico. He later attained a Master of Arts in Anthropology from Carleton University and a doctorate at the University of Amsterdam’s School for Cultural Analysis. Gerald has worked as a Curator of Contemporary Indian Art at the Canadian Museum of Civilization and as Deputy Assistant Director for Cultural Resources the Smithsonian’s National Museum of the American Indian before joining the AGO in 2005. 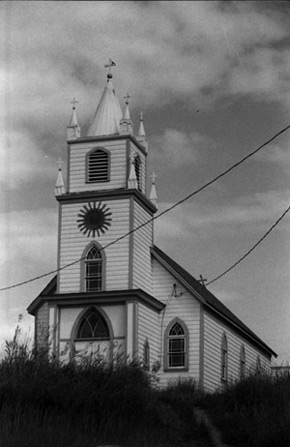 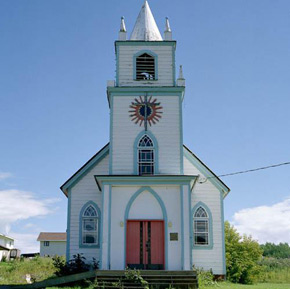 What Is An Indian Church?

What is an Indian church? To begin, the misnomer “Indian” is no longer used in Canada when referring to Aboriginal Peoples or First Nations. The Church, led by its missionaries, spread throughout the land in the 19th century. For British Columbia, the full onslaught of Christianity occurred between 1850 and 1900, filling the void of outlawed spiritual practices. The construction of Indian churches on most First Nations’ land came to represent a dominating influence of European civilization. Nonetheless, many First Nations peoples participated in the building of these churches. 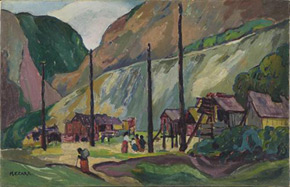 Over a thirty-year period, Emily Carr (1871-1945) made at least four trips from her home in Victoria, B.C., into First Nations’ territories along the coast of British Columbia, specifically to witness and document totem poles.

Indian art broadened my seeing, loosened the formal tightness I had learned in England’s schools. Its bigness and stark reality baffled my white man’s understanding.

With each trip she gained a greater understanding of the conditions within which First Nations lived; yet, this aspect was only ever a point of interest in her writings. 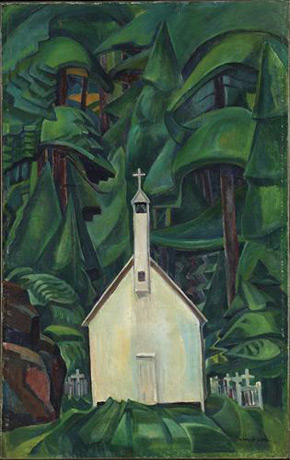 In 1929, Emily Carr travelled up Vancouver Island to Yuquot/Friendly Cove on Nootka Island, territory of the Nuu-chah-nulth people. Yuquot was also the first place of contact between Europeans and First Nations. Here, she painted the small, white Roman Catholic Church. Located at the end of the village, she called her painting Indian Church.

This depiction of Indian Church was painted at a time when First Nations were being rapidly acculturated, while their spiritual and cultural practices were being outlawed. The presence of the church in the community filled the void. 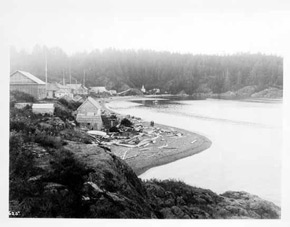 The Nuu-chah-nulth have lived at Yuquot for at least 4,300 years because of its climate, rich sea life and beautiful surroundings. Captain James Cook of the Royal Navy was the first European to land here in March 1778. From 1789 to 1795 English, Spanish and American traders and explorers were a constant presence. Because of its long history and importance of relations with Europeans, the Canadian government declared Friendly Cove a National Historic Site in 1923 and recommemorated it in 1996. Today, it is the home of the Mowachaht-Muchalaht First Nations. Nuu-chah-nulth is the name of all peoples indigenous to the West Coast of Vancouver Island, while Mowachaht refers specifically to those who lived at Yuquot.

In ancient times, the Mowachaht would move here in February and stay through the spring and summer, then leave in August for other sites. Like many B.C. communities in the mid to late 19th century, Mowachaht came under the influence of Christianity, and by the early 1900s, most Native peoples lost control of their religious practices, effectively being Christianized. Belgian priest Father Joseph Brabant built the Roman Catholic Church at Friendly Cove in 1889. In the early 1960s it burned down. 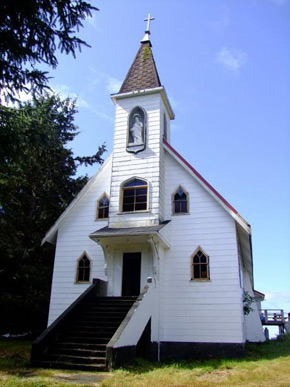 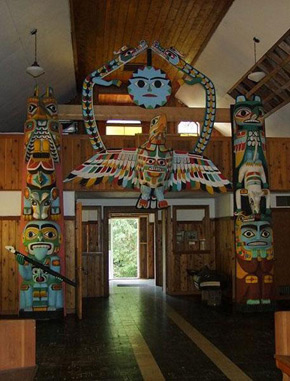 In the present tense, we begin to see a different picture emerge. After 75 years of a deliberate cultural erasure by colonial governments, First Nations are now poised to recover and build from remaining fragments. Curiously, the church as a signifier of modernity remains, albeit tenuously. First Nations now control their destinies, including how churches operate in their territories. The church painted by Carr in 1929 burnt down in the 1960s, but the community of Mowachaht/Muchalaht rebuilt it. During the 1990s, they raised several poles inside the church as a sign of this shifting authority. Christianity continues to exist among First Nations.

To celebrate the bicentennial of the historic meeting between captains Vancouver and Quadra, and as a gift to the Mowachaht/Muchalaht, Spain donated an exquisite stained- glass window for their new church. 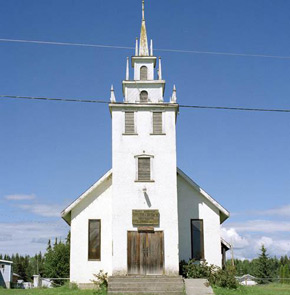 In the summer of 2005, Toronto-based photographer Arthur Renwick photographed a number of churches in British Columbia. He was struck by their tranquil beauty and their individual differences. His churches have now come to symbolize their transformation from serving as handmaidens to assimilationist programs to becoming quiet witnesses to local authority.

Renwick’s photographs of modern-day First Nations’ churches allow us to re-examine Carr’s own painting, Indian Church, on different levels. The contemporary lens through which we view a historical moment allows us entry into a time out of our memory, yet firmly planted within the spatial environment of the Indian/White relations of yesterday and today.

Renwick’s work should, in no way, be considered an inspiration, influence or an after-effect of Emily Carr. Instead, the after-effect is in the churches themselves, in the way in which the First Nations of British Columbia have begun taking control of their religious and spiritual life, after decades of profound systemic erasure. 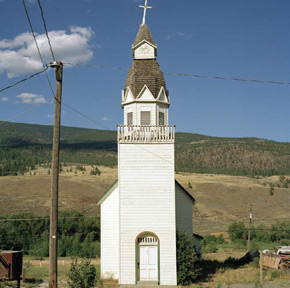 When Carr painted the now celebrated Indian Church, it was painted at a decisive point of her career, when she departed to painting landscapes from painting Indians. It was also a period of great rupture for First Nations across the country. During her time, First Nations were experiencing rapid civilization. Now, First Nations are taking control of the churches, becoming ministers or incorporating traditional practices that are no longer outlawed, such as raising poles.

The juxtaposition of Renwick’s Indian Church series is to imply various connections with Carr’s Indian Church, albeit from a contemporary perspective, in the following manner: that in the first-half of the 20th century, Christianity filled the vacuum created by outlawed spiritual and cultural practices of First Nations; that Indian churches continue to be a paradox in First Nations’ communities, where community members continue to embrace Christianity. Many communities have re-established traditional spiritual and cultural practices into the rituals of the church.