Come Away With Me: European Travels

This personal travel album, which was given to the Art Gallery of Ontario in 2007, charts a trip through several European cities during the spring and summer of 1936. These 16 photographs, housed in a small portable album, take us away to a different time and to places we may never have visited.

What time or place would you most like to visit? Why? 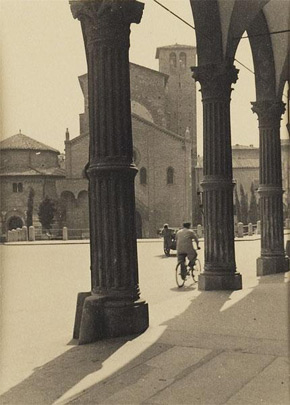 Sophie Hackett is the Assistant Curator of Photography at the Art Gallery of Ontario. Prior to this, as a writer and independent curator, she published writing in Lola, Saturday Night magazine, Xtra!, C Magazine, Canadian Art and Prefix Photo. She has curated five exhibitions independently, including The Found and the Familiar: Snapshots in Contemporary Canadian Art, co-curated with Jennifer Long (2002), Flash Forward (2005), and Wallpaper (2005).

By the early 20th century, photographic technology had evolved enough to allow photo enthusiasts to take their own pictures whenever and wherever they liked. The creamy, textured pages of the ‘Tebe’ Klein-Photothek, or small photo album, were designed to hold standard 9 x 12 cm photographs. The sticker on the album’s inside front cover reads Walter Talbot, Berlin, a camera and photographic supplies store. It provides one of the few clues to the photographer’s identity: he or she was likely German.

The notations here, in German, list an ambitious travel itinerary through cities in Belgium, the former Czechoslovakia and Germany, including Brussels, Antwerp, Bruges and Potsdam. These cities, which range across Central Europe, indicate that the trip likely extended several weeks, if not months. Several photographs in the album, however, were taken in Italy and the former Yugoslavia, places not included in the itinerary. 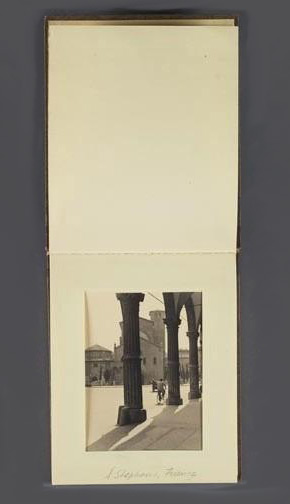 The Romanesque church of Santo Stefano al Ponte in Florence, Italy, provides the backdrop as a man cycles through the square. Our photographer made dramatic use of the columns and the shadows they cast to create this everyday street scene.

Not only does the caption on this page indicate that it once included a now missing photograph, but it is also written in English and in a different hand than the itinerary on the second page. We wonder who wrote the captions and when, and how the album itself migrated from the photographer perhaps to other family members, and eventually to the AGO – questions that ultimately have no answers.

The caption does tell us, however, something about the photographer’s interests: the sights in each city, particularly the architecture and monuments. These subjects continue to preoccupy tourists today, as travel guides consistently point out historical buildings as places of cultural meaning. Interestingly, though, the photograph was taken from the Doge’s Palace – one of Venice’s must-see sights – rather than of it. 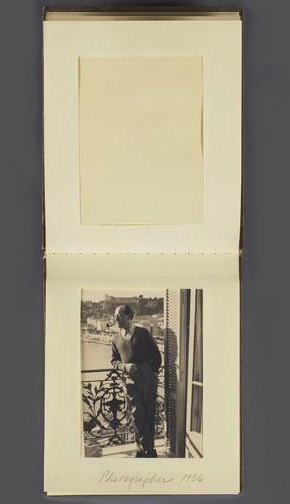 A portrait of a man, looking relaxed as he smokes his pipe. Is he the photographer? Who photographed him?

The caption “Photographer’s wife?” clearly indicates that its writer did not personally know either the photographer or his companion. It is just as possible that this woman made most of the photographs. 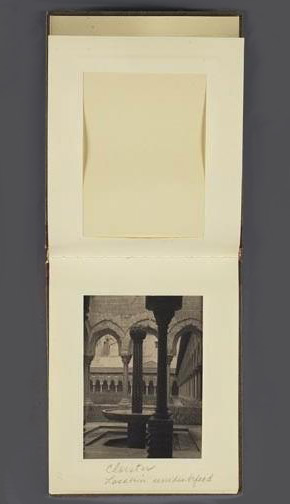 Flipping through the pages of the album, we can begin to discern which things captivated the photographer’s eye. Architecture is clearly a favourite subject, and in many photographs he or she ably frames the scene using such architectural elements as columns and arches.

Among the more considered picturesque views in the album, there are also more spontaneous shots like this one. It alludes to a leisurely way of travelling, when tourists brought everything they needed with them. 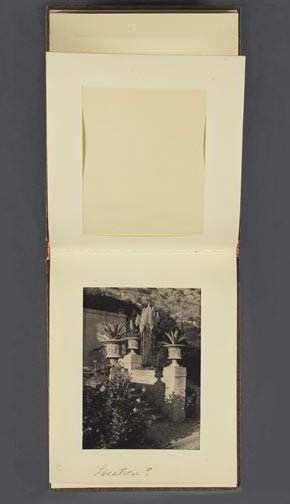 Whoever wrote this caption [Location? 1936] either wrote it long after memories of the trip had faded or was never on the trip. The caption is apt, though. The plants indicate a Mediterranean climate, but the location could be almost anywhere. The photographer emphasizes the arrangement of forms, textures, light and shade. Such were the concerns of leading photographers of the day.

This view of women selling textiles in a bazaar has a photojournalistic feel. Indeed, there were more photo-illustrated magazines in Germany in the 1920s and 30s than anywhere else in the world. Many of the photo-essays would have taken up the subject of everyday life in various locales. There is a good chance that our photographer read such magazines and absorbed their images. 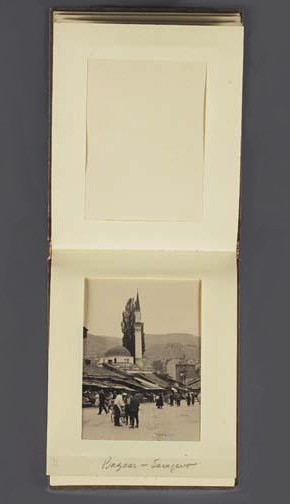 A Moment of Contrast

Here, the photographer effectively juxtaposes the mosque’s striking dome and minaret with the vernacular, or commonplace, architecture of the market stalls. 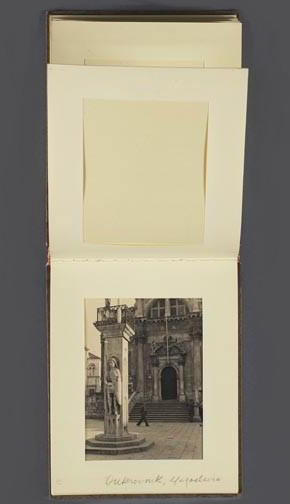 This scene in front of the Church of Saint Blaise in Dubrovnik doesn’t look like a typical tourist snapshot, which would likely have included one or more of the travelers in front of the church or sitting on the steps. Instead, this photograph seeks to create a sense of life in the church square. 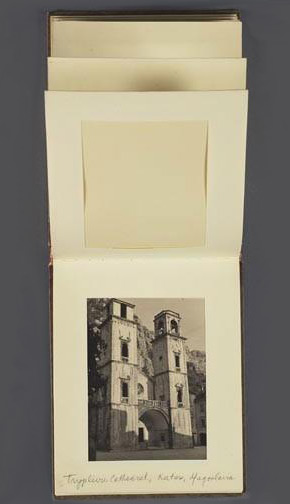 The photographs in personal travel albums often correlate to whatever book the vacationers were using to guide them through a city and its highlights. Here, however, it appears that the photographer was after a different kind of view. Perhaps it was to express the character of work in Sarajevo. Or perhaps it was the arrangement of the ropes and the mystery of the empty chair that captivated his or her attention. 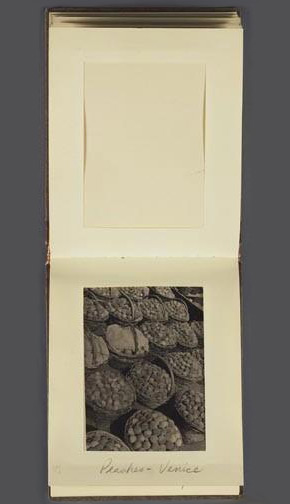 This appealing close-up of peaches in Venice invites us to move beyond the photograph and to conjure the texture of the peach fuzz and the smell of the ripe fruit warmed by the sun. 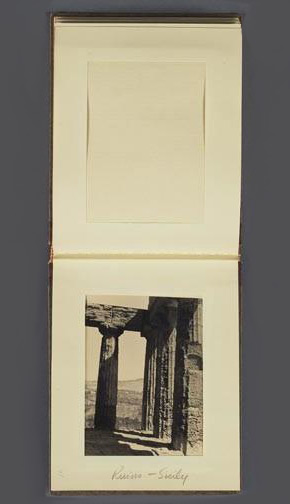 In coming to the end of the album, one question remains: What did photography mean to this photographer?

The photographs in this album certainly provide visual notes on a trip, supplementing the stories the traveller would recount once at home again. Remember that these pictures were taken in 1936, during Hitler’s rise to power. The photographs, of course, show none of this political turmoil – this is perhaps something the photographer did not wish to see. Using up-to-date technologies, he or she memorialized the glories of older civilizations, a decided turn to the past and away from the present.

Use the following questions to promote critical thinking, discussion, or writing as you view the photographs in this collection.

It’s time to create your own album! Think about how you see the world, at home and while traveling to new places. Use the questions below as a starting point for you own work. Share your work with others as you go.