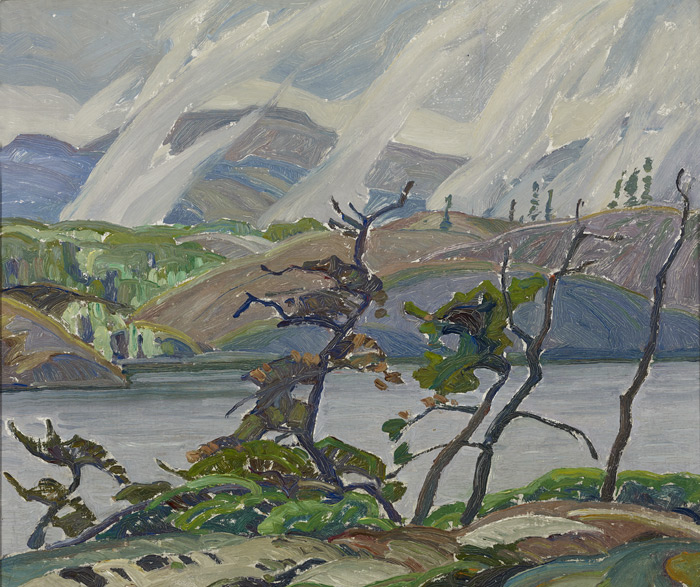 Franklin Carmichael was born in 1890 in Orillia, Ontario. His father taught him the family trade of carriage making but Franklin was determined to be an artist. He started taking art lessons at age 12. Franklin then went on to study art in Toronto and Antwerp, Belgium as a young man. He also experimented with sculpture and decoration using metals and other natural materials.

Carmichael was a man of many talents. He is well known as an artist in The Group of Seven, but he began as a designer, graphic artist, and craftsmen who was able to play several instruments. He was a quiet man who didn’t give lectures or write. He did teach art classes at the Ontario College of Art (now OCAD University) and became the head of Graphic Design and Commercial Art in 1932. Carmichael also served on many boards and artist-run societies, and founded the Canadian Society of Painters in Water Colour with A.J. Casson in 1925.

This painting is only one of many landscape paintings and sketches of Cranberry Lake where Carmichael often visited with his family.

Carmichael was detailed oriented. He started his watercolour paintings with a drawing and made every attempt to minimize colours bleeding into each other on the canvas. This painting is different, as it is a preparatory sketch. It was likely done outside, more quickly than his more precise, graphic-inspired work.

This painting is in oil. It was considered the conventional way of painting for serious artists, but Carmichael believed you can still “express deeply what you are trying to say with watercolour.”

Carmichael did not feel the need to paint the Arctic or Rocky Mountains as the other members did. He was a devoted family man and could not explore the country to the same degree as the other members. Much of his work revolves around Ontario. However, biographers also note that he was never upset with this reality, he embraced it.

He spent much time finding a place for a family cabin in northern Ontario and found the ideal location on shores of Cranberry Lake. The lake is located in the La Cloche Mountain region of Ontario where he lived part-time with his family. The area was under threat from logging and along with other artists Carmichael convinced the Ministry of Natural Resources to relocate the timber rights to the Killarney Timber Park. Carmichael also used his work to explore the impact of mining and other industries in Ontario.

Carmichael was the second-youngest member of the Group of Seven, and was hired at the design firm Grip Ltd. by fellow member J.E.H. MacDonald. Although he started off doing office work and errands, he became an accomplished designer and illustrator. He made illustrations and promotional materials for books, magazine articles, and large corporations such as: Ford Motors, Neilson and CN hotels. Carmichael’s success as a painter came later. Although he was a talented artist and designer, many thought that he was somewhat overshadowed by the other members of the group.

Like many members of the Group of Seven, Carmichael taught young students how to become working artists. He spent 14 years as a teacher of design and painting at Ontario College of Art (OCA) now OCAD University. A past student described him as being a wonderful teacher but also, “crusty and abrasive.”

The AGO has collected a number of works by Carmichael, including many accomplished pieces in watercolour and in oil paint, such as Autumn Hillside, 1920

A1. The landscape in Carmichael’s paintings is usually rugged, large in scale, and sometimes foreboding. The small scale of the dwellings and their placement on the earth’s surface suggest nature’s power and force over man and his efforts to tame it. Look closely at the houses, they seem somewhat off-kilter, unstable, or in some cases, huddled together for warmth. Notice how this relationship may differ depending on the season.

Q2. Franklin Carmichael said “Landscape painting gave Canada a unique and distinctive identity.” Describe the “Canadian Identity” you see in Carmichael’s paintings, and those of other Canadian landscape painters in the Group of Seven. Make references to specific features of the paintings to clarify your point of view. Do you agree with this notion of Canada’s Identity? Why or why not?

A2. For some, the Group of Seven landscape paintings are iconic representations of Canada, especially Northern Ontario. Others feel that these paintings generate a “myth” of Canada as being harsh, rugged, and uninhabitable. To continue the conversation, use Canadian landscape paintings from the 1920’s-1950’s to support and refute this Canadian myth.

Create your own version of Canadian Identity. Start by writing about what “your Canada” looks like. What features do you think are important? What are your thoughts on the relationship between man and nature? Then, using watercolours, oil paints, mixed media or a performance, create your version of Canada and share it with others. See if they can determine what Canadian identity looks like to you, based on the clues in your artwork or performance.

Cranberry Lake is located in the La Cloche region of Ontario, which is north of Manitoulin Island, on Georgian Bay. Filled with quartzite mountains and lakes. This area inspired some of Carmichael ‘s best-known work.

There are tens of thousands of islands in Georgian Bay. Most of these islands are along the east side of the bay and are collectively known as the "Thirty Thousand Islands," including the larger Parry Island. Manitoulin Island, lying along the northern side of the bay, is the world's largest island in a freshwater lake. In October 2004, UNESCO declared the Georgian Bay Shoreline a Biosphere Reserve.

Carmichael created a watercolour to capture the beauty and the scale of the Thirty Thousand Islands called Bay of Islands, 1932.

This area has a much longer history, and was home to several First Nations before European explorers arrived. Prior to European contact, the Anishinaabeg (Ojibway, Algonquin and Odawa), Huron and Tionontati hunted, fished and traveled amongst these islands.

Legend of The Thirty Thousand Islands

The Huron have a legend to explain the creation of the “Thirty Thousand Islands.”

Kitchikewana was a fierce god with an unpredictable temperament who lived among the shores of Georgian Bay. When he was angry, the shores of Georgian Bay would shake from his rage. To quell and control the god, the Hurons decided to find him a wife. They brought forth their most beautiful maidens for Kitchikewana, who fell in love with a maiden called Wanika. However, defying her tribe’s elders, she rejected the god’s proposal as she herself was already in love with another.

Outraged and heartbroken that someone would dare defy him, Kitchikewana scooped up mounds of earth from the bay and threw them at Wanika as she dashed away in a canoe to escape Kitchikewana’s wrath. These mounds of earth fell into the bay and became what is known as the “Thirty Thousand Islands” and the holes left from the god’s digging became the five bays within Georgian Bay.

Exhausted and heart broken, Kitchikewana laid down at the base of the islands for an eternal slumber and became the island known as “Giant’s Tomb” which can be seen today.

See the McMichael’s resource page on Carmichael for additional information:

View Carmichael’s sketches and work at the National Gallery in Ottawa: