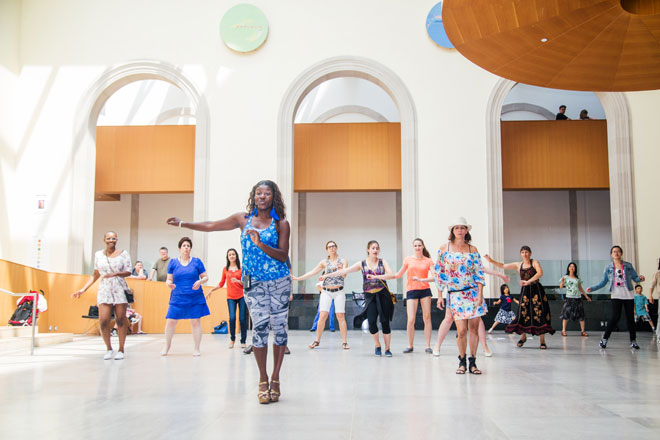 Saturdays, 2 & 3pm
July 4 – August 29, 2015
Walker Court, Art Gallery of Ontario
Included with admission
In conjunction with Picturing the Americas: Landscape Painting from Tierra del Fuego to the Arctic, join us for music and free dance lessons on Saturday afternoons  featuring samba, salsa, rumba and more from across the Americas.


With cultural roots in Cape Verde and Guinea-Bissau, "Samba Jess" specializes in Brazilian Carnival Style Samba, as well as some of the native dances from the Portuguese Diaspora. Jess has performed and taught across Canada, in Costa Rica and Rio De Janeiro, Brazil. Travelling to and from Brazil since 2009, Jess has studied with samba greats in Rio and New York City and paraded as a passista with the samba schools 'GRES Unidos Da Vila Rica’ and 'GRES Acadêmicos da Rocinha.’

Paula Videla-Rodriguez is founder & co-director of Dance to Live Studio, one of Toronto’s longest established salsa studios since 1996.  Known for her charisma, professionalism, infectious performance energy on stage, and strong adherence to dance technique in her instruction, Paula is also a pioneer and veteran of the Toronto salsa scene, with a lifetime of experience in dance including flamenco, gymnastics, ballet, Latin folklore and ballroom.

Miko Sobreira teaches Salsa Dura, a street-style salsa focused on interpreting the rich musical diversity of the genre. For over 16 years, he has taught for dance companies, studios, universities, colleges and high schools, and participated in all kinds of events and fund-raisers across Canada. Growing up in the little towns of Venezuela, Mexico and Spain, Miko was exposed to and deeply influenced by Afro-Venezuelan, Latin-Caribbean and Spanish popular culture. The streets of his hometowns were the perfect school for his salsa dance training, where dancing helps individuals and society cope with hardship and express themselves. Miko has also worked with many contemporary choreographers such as Denise Fujiwara, Claudia Moore, Maxine Heppner, Pam Johnson, Alejandro Ronceria, Learie McNicolls, and Karen Kaeja as well as dance-theatre companies including Corpus and Sound Image Theatre.

Guaracha y Son Led by bassist Roberto Riverón with Pabolsky Rosales on tres and vocals, Chendy Leon Sr. on percussion, and Jorge Maza on flute, this all-Cuban, Toronto-based quartet performs classic son montuno, guaracha, bolero, changüí and guajira from the 30s to 60s as well original compositions. Three of the members of the group were part of the legendary Cubanismo which toured internationally for many years under the direction of Jesús Alemañy. Fans of Buena Vista Social Club, Benny Moré and Eliades Ochoa will enjoy the repertoire of this lively, authentic and soulful traditional Cuban quartet. Guaracha y Son performs periodically at Lula Lounge, every second Thursday at Peppers Cafe and DanZon Studio on the last Sunday of each month.

Dailyn Martínez studied contemporary dance, musical theatre and cabaret at the prestigious Escuela Nacional de Espectáculos Musicales in Havana, Cuba and toured Europe and Australia extensively with Havana Night and Teatro América.  In Toronto, Dailyn teaches salsa and Afro-Cuban dance to adults and youth at a variety of studios, including a Saturday afternoon class at Lula Lounge which focusses on Cuban style salsa. She was recently invited to dance Yemaya (Yorùbá Orisha or Goddess of the living Ocean) to open the Toronto performance by David Calzado y La Charanga Habanera. Dailyn will be accompanied by Cuban percussionist and educator Reimundo de Sosa who performs with jazz, hip hop and world music groups such as Iroko Project, Ogguere and Battle of Santiago.

Alec Dempster with Luz Castillo Born in Mexico City and now based in Toronto, mutli-disciplinary artist Alec Dempster has devoted fifteen years to learning, researching and promoting the music and dance traditions from the state of Veracruz, Mexico. More recently, he has focused on the Day of the Dead celebrations that feature masked dancers who gather in their communities to honour the returning souls of deceased relatives. A week prior to the festivities entire neighbourhoods in towns such as El Higo, Tantoyuca and Tempoal, gather in the street to rehearse the festive line dances. In the spirit of these collective dance sessions Alec will teach the public several of the most popular dances such as the Rooster, The Little Green Bird and The Hand, with the help of violinist Amanda Medina and Mexican choreographer Luz Adriana Castillo

Presented in collaboration with Lula Music and Arts Centre