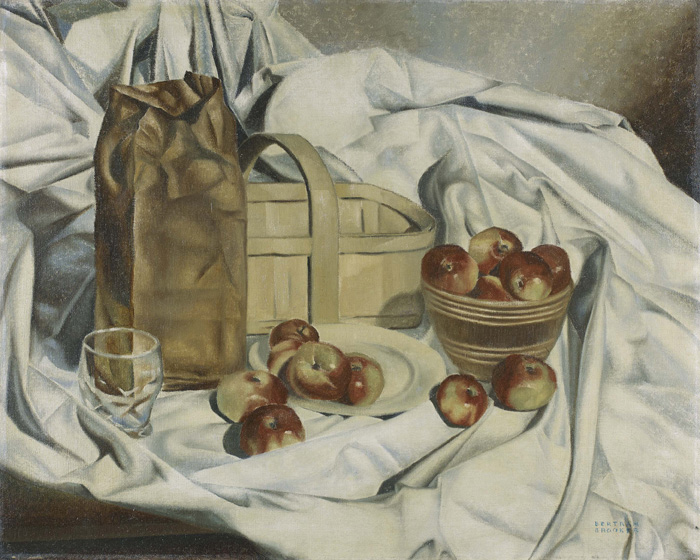 Bertram Brooker was a man of many talents. He was a painter, novelist, poet and respected advertising executive. Brooker has been described as a “Renaissance Man.” He was born in England in 1888 and immigrated to Manitoba.

During that time Brooker worked with the Grand Trunk Railway and ran a movie house. In 1921, he moved to Toronto and entered the advertising industry by buying Marketing Magazine. By 1927 he had worked for several advertising agencies and later became Vice-President of MacLaren Agency. He was considered an “advertising genius” despite only having a grade school education.

Brooker was an accomplished writer. He wrote books in advertising under the pseudonym Richard Surrey. One of his books is considered to be the bible of advertising, Copy Technique in Advertising. He also wrote a newspaper column called The Seven Arts, and was friends with several members of the Group of Seven.

Bertram Brooker never went to art school. He was a self-trained artist. One biographer believed that Brooker wasn’t able to accurately draw or paint objects, which led him to become an abstract artist instead. Although he has a few still life paintings in Toronto collections he is best known for his abstract works, and some consider him the father of modern Canadian abstraction. At the time, critics hated his work and several Group of Seven members didn’t understand his artwork either. However, A.Y. Jackson appreciated Brooker’s abstract art and said “This makes the Group of Seven seem like old hat.”

Very little is known about the painting Fruit and Basket, c. 1935. It is a classic still life set up, where the artist arranges everyday objects of different shapes and textures against a cloth background. Usually artists do this in order to study how the light falls on different kinds of objects and to practice rendering a variety of textures, like the pleats in the fabric, the crisp folds of the paper bag, and the shiny, round surface of the apples.

Bertram Brooker was a close friend of Lawren Harris who was a follower of theosophy, a mixture of religion or spirituality, and philosophy. Harris might have steered Brooker towards the writings of European painter Wassily Kadinsky and theosophy which could have inspired him to create abstract art. Like Kandinsky, Brooker aspired to paint what he could hear. Beginning in 1924, Brooker was influenced by Kadinsky’s mantra that one should consider abstract painting as one considers music. Brooker is remembered as saying he painted “abstract music.”

Brooker faced resistance to his abstract work. Public libraries and galleries didn’t exhibit his work because they didn’t like it. Next he tried representational art. His painting “Nudes in a Landscape” was included in the 1931 annual Ontario Society of Artists (OSA) exhibition at the Art Gallery of Ontario (then known as the Art Gallery of Toronto). However, the public found it obscene and the OSA removed it from display and pulled it from the catalogue. Brooker wrote an essay titled “Nudes and Prudes” in response, condemning the public’s conservative response to the nude figure in art.

The AGO has collected a number of works by Bertram Brooker, including portraits, landscapes, and his abstract works, which he is best known for, including Green Movement, c.1927.

Q1. Brooker first experimented with abstract art based on impressions of music, “Whereas most artists paint nouns or objects, I paint verbs or movement, activity.” Look at the works The Three Powers, 1929 and Chorale (Bach), c. 1927. What kinds of movement or action do you see? Are both movements physical motion? How has Brooker captured action and motion in his paintings?

How can you draw, paint, or use digital media to make sound and motion visible? What kinds of sounds or actions will you choose? How will you express the feelings associated with those sounds or motions in your work? Be sure to work through your ideas in your sketchbook, and write an artist’s statement to support your finished piece.

A1. Brooker captures motion that is both seen and unseen. In Chorale (Bach) he captures the rhythm of the music using colours, gestures, shapes, and patterns. See if you can identify the various parts of the painting when listening to a Chorale by Bach. Would you capture this piece of music differently? How? Discuss how other pieces of music can be captured, and try it as a class!

Q1. One biographer noted that Brooker couldn’t draw or paint any object at all. What do you think of Brooker’s abilities to paint objects? What criteria will you use to evaluate the strengths and weaknesses of the painting? Is the goal to re-create the object exactly as it appears, or create an artistic representation of the object? Give reasons for your answers, using this painting and another of Brooker’s still life paintings such as Still Life with Lemons, c.1936.

Hold an open debate in your class and create two arguments for and against Brooker’s still life as great art.

Q2. Try your hand at still life by assembling a variety of objects in various shapes, sizes, textures and colours. Set up the still life in an open part of the room so that you can move around it freely, or several people can be working at once. Have fun with it, as objects don’t have to relate to one another, and can become an assemblage of found objects.

Leave the still life set up over a number of days or weeks. Revisit the still life and experiment with different objects, points of view, and styles of drawing. Add quirky or strange objects that add unusual textures, colours, or forms to the still life set up. Select one or more of your favorite drawings and turn it into a painting, sculpture, or multimedia piece.

Try and use objects to tell a story about yourself, or comment on an issue like “consumption” or “modern life” or “waste”.

Brooker edited a publication of Canadian art in review. This publication can be found at the AGO’s Edward P. Taylor Library & Archives, open to the public during designated hours.

Publication
Brooker, B (1929). Yearbook of the Arts in Canada, Macmillan Company of Canada, Toronto, 1929.