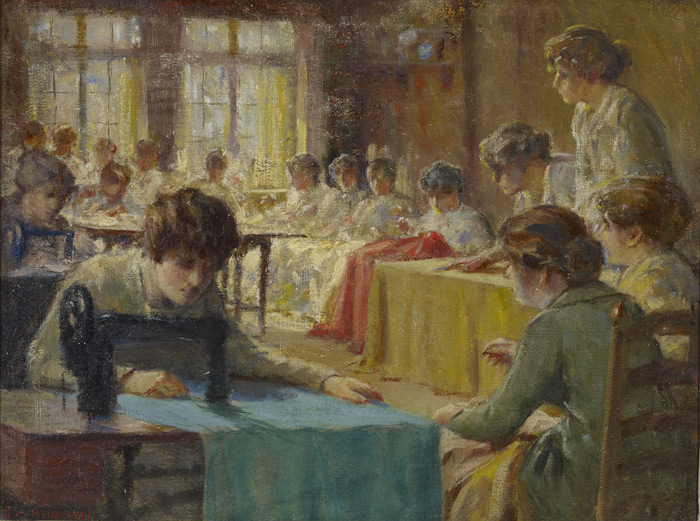 George Agnew Reid was born into a farming family of 9 children. At age 11, he told his family he was going to be an artist. The news did not please his father who then made him work on the farm and later apprentice at an architecture firm at 15. However, George did continue his studies and he received his formal art training at the Ontario College of Art in 1879. After graduating Reid went outside Canada for further training in the USA, Paris and Madrid.

During World War I (WWI), Reid became an art teacher and saw many of his male students enlist in the war as soldiers and as war artists. Reid was the principal of the Ontario College of Art (now OCADU) from 1912 to 1918. During this time The War Records Office commissioned him to paint for the government, along with many other artists, commemorating soldiers here at home.

Reid was also interested in domestic activities that occurred during wartime. A large sewing group regularly met at Reid’s home in 1915. This moment could have provided the inspiration for this painting.

The painting shows a group of volunteers sewing for the soldiers fighting overseas in the First World War. The subjects were most likely all women, as sewing was considered "women's work", and most men were overseas fighting. Most of Reid’s paintings are highly detailed, however, 1917 is different in style. The painting lacks the clear visual details inherent in his other works. For example, the faces of the subjects are blurred leaving the viewer to fill in the details.

Painting for the War: The Patriotic Fund Exhibition

The Red Cross and art associations became very interested in art for fundraising purposes. Reid painted 1917 specifically for the Patriotic Fund Exhibition in 1916 held at the Toronto Reference Library. It is interesting to note that the title refers to the year after it was painted. Many artists who wanted to help the war effort curated this exhibition. They contributed their artwork for the exhibition and the money from admission tickets went to the Patriotic Fund, a fund that provided for the wives and families of soldiers overseas.

World War I (WWI) was the first time in Canadian history when women were encouraged to participate in roles that extended outside the home, and it was the first time the outcome of a war included the direct participation of women. Thousands of women filled positions in manufacturing, farming, office work, and banking that were left empty by men fighting overseas. In addition, women created numerous sewing groups across Canada to make items from pillowcase, facemasks, and scarves that were sent to the soldiers overseas and many nurses served in military hospitals in Canada and Europe to heal the wounded. Approximately 2,500 “Nursing Sisters,” as they were referred to, worked the front line. Records show that 46 nurses died in Europe during WWI.

Women and the Vote

The women’s suffrage movement was already in motion as Canada fought in WWI. Several countries had already granted the vote to women but Canada had yet to grant any such right to women at home. The Ontario government blocked any chance for change in the provincial house. Prime Minister Robert Borden’s Wartime Elections Act of 1917 enabled women serving in the forces and the wives, daughters and sisters of men serving in the forces the right to vote. Many sources list this year as the first year women were granted the vote. However, all women were not given full voting rights until 1918.

Some historians debate whether women’s participation in the war was a turning point in the government granting women the right to vote. Some suggest that Canada would have eventually granted women this right even without participating in the war as other Western nations had already granted the vote. However, some historians believe that due to women’s direct participation in the economy at home and in the conflict overseas, the federal and provincial governments felt that women had earned their right to be treated as (partially) equal to men.

Brochures from during the WWI referred to Canadian women as “England’s Daughters.” This shows that Britain and most Canadians identified themselves being a colony within the British Empire and not an independent, self-sufficient nation. Many, if not most Canadians felt it was their duty to fight in the war, not for Canada, but for Britain. Whether Canada’s participation altered Canadians’ self-perceptions is widely contested by historians. However, many suggest that Canada’s success in winning battles such as Vimy Ridge initiated growing patriotism and national identity in Canada.

Reid is known for his emotional narrative genre pieces that capture scenes from everyday Ontario life during the early 1900’s, along with military commemorative murals. His paintings captured the social, economic and virtues of the Victorian conservative culture of Ontario.

Reid was completely dedicated to painting what he felt were scenes of Canadian life. In Paris, he posed French workers on the Seine river, that ran right through the city and painted them as Canadian workers on the banks of a stream.

Narrative artwork suggests a story and features one subject or multiple subjects in a single painting, drawing, or sculpture. They are often visual records of history, showing a key moment or event, especially prior to the invention of the camera. When looking at a narrative, the viewer often feels like they are looking through a window. Artists were judged according to how much detail they could capture in a painting, as if the painting itself was a photographic image of the scene. Narrative painters commonly used these techniques in the 1800’s and early 1900’s.

During his career George Reid painted several large murals around the city of Toronto. He painted murals on pioneer life at old Toronto City Hall, historic scenes at the Dufferin and St. Clair library, and several infamous dinosaur murals at the Royal Ontario Museum (ROM). Reid also painted historical interpretations in many schools, including an ambitious project at Jarvis Collegiate Institute. He began these large paintings on the walls and ceiling of the auditorium in the 1920’s but died before the project was completed. Reid’s second wife, Mary Wrinch Reid, a painter in her own right, finished them in 1949.

The AGO has collected a number of works by George Reid, including many narrative pieces, landscapes, and figure studies painted from 1884-1938 including these popular works: Gossip, Drawing Lots, The Other Side of the Question, and Self Portrait.

Q1. Why do you think Reid decided to capture this moment in Canadian history? How does it assist in commemorating the work of women on the home front? How accurate or “true” do you think the image is? Explain.

Q2. As a viewer you are asked to fill in the details of the women’s faces using your imagination. What impression do you get of these women and their work? Why do you think Reid did not add detail to the subjects’ faces?

Q1. Some critics feel that Reid’s painting creates a nostalgic, almost romanticized image of events in Canada during WWI. What is a “nostalgic” or “romantic” image? How is it constructed?

Q2. Do you think this painting presents an accurate portrayal of the atmosphere and mood in Canada at the time, or a romanticized image? Give reasons for your answer. What do you think about images that aim to “romanticize war”?

With your teacher, conduct a Google Image Search using the term WWI posters - Canadian Patriotic Fund. This search will help illustrate how graphic posters were used to outline women’s expected contributions to the war, and generate cash donations to support production of supplies, in addition to the soldiers’ families.

Q1. Using Reid’s painting, and graphic posters created in Canada during WWI, discusses how these artists presented specific roles for men and women. Do you think these posters reflect the real-lives of men and women during the war? Why or why not. Make sure to refer to specific elements in the posters to support your opinion.

Q2. Select a few government posters or web ads from the last 5 years that suggest specific roles for men, women, students, teachers, and families. What messages do these contemporary images convey about the roles of men and women? Search federal, provincial, and municipal websites for examples.

(Optional – compare these images with those in advertising and media. What similarities or differences in messaging can you find? Are any of these images “accurate”? How do these images compare with the roles played by men,  women, and young people in your life? Explain.)

This McMaster University website contains scans of five WWI brochures targeted at women from the Department of Public Information. They are inspiring “England’s Daughters” to support the war effort by citing the contributions of several women serving in the forces in auxiliary services and encouraging women to fill roles that were left empty by the men, such as working in an ammunitions factory.

The Federal Government’s online collection of WWI journals and photographs can be accessed here:
http://www.collectionscanada.gc.ca/firstworldwar/index-e.html

Ontario Archives features letters between the Gray Brothers, two Ontario soldiers who wrote letters home, and to each other during WWI – print and audio files:
http://www.archives.gov.on.ca/english/on-line-exhibits/gray/index.aspx