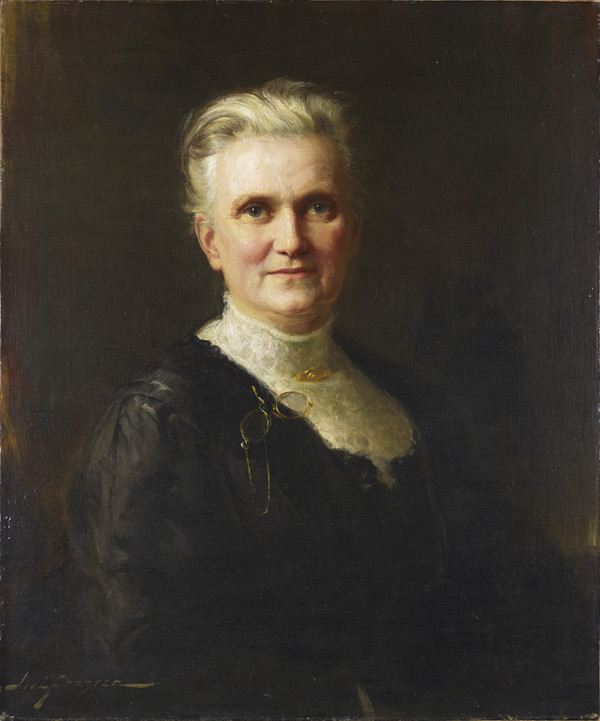 J.W.L. Forster (Canadian, 1850 – 1938), Hester How, 1913, oil on canvas. Collection of the Toronto District School Board. Commissioned by the Toronto Board of Education.

J.W.L. Forster was the leading Canadian portrait artist of the late 1800’s and early 1900’s. During his career he painted numerous portraits of politicians, merchants, war heroes, educators, royalty, governor generals, prime ministers and Toronto mayors who served during his lifetime. If you were a prominent public figure at that time, chances are, you wanted to have your picture painted by Forster.

Forster was born in Ontario in 1850 went to school at Brampton Grammar School. At 19 he apprenticed with a portrait painter and worked in his studio for many years. Forster had his sights set on Paris, and saved for 10 years to make the trip to France. In France he studied art at the Ecole Julian, Paris.

In Paris Forster was well on his way to becoming a master portrait artist. His mature work is highly detailed and he leaves nothing to the imagination. His time in France influenced his approach to his work. However, Forster was not always so detailed. As a student, Forster told his art professor that he wanted to leave some of the fine details out of a portrait and leave the viewer to fill in the missing visual information. His teacher replied that those who leave out details are “cowards” and use the idea of “leaving it to the imagination” as an excuse not to complete the work. His professors called these artists “oblivious”. Perhaps this is why Forster is so precise in his work?

Forster painted over 600 canvasses in his lifetime and most were highly detailed portraits of accomplished public figures in politics, royalty, and civic life. In 1897, Queen Victoria gave him special permission to sketch her portrait during a service at St. George’s Chapel at Windsor Castle, a high privilege at the time. Forster also travelled to Japan where the Emperor and Empress allowed him to paint their portrait from a photograph. His work was well known, and he exhibited in Paris, London, the U.S.A., and Canada. Forster died in 1938.

Hester How was a Toronto teacher well known for her kindness, intelligence and ability to teach without corporal punishment. In 1879, she convinced the school inspector James L. Hughes to form a special class for delinquent boys who were expelled or identified by society as “unteachable”. Critics argued that a woman was unsuited for such a task but her classroom was a success. She also pioneered fresh air camps, nurseries, and what would become Juvenile Court in Toronto.

Forster painted this portrait on the eve of How’s retirement. As he was painting, How would share her stories of turning around boys from abusive homes and whom had criminal records.

A soul looks out from every face. Each person’s face is a page of eternity written with the pencil of time.”

Forester believed that a detailed portrait would reveal aspects of the sitter’s personality. He took great care painting each face, and built a relationship with the sitter as he worked. In many cases they would discuss life, work, and personal experiences. Sitting for a portrait was an intimate and personal affair, designed to reveal the person’s innermost thoughts, feelings, and personality.

Forster painted a number of Toronto public figures. Much of his work is displayed and stored in public institutions, in addition to his letters and personal papers. Forster’s personal letters and papers can be found at the Toronto Reference Library:

The AGO has collected and borrowed a number of works by Forster, including an early work painted in 1878. Forster’s portrait of How was a later work, completed in 1913.

Compare the style of this portrait of retired professor Goldwin Smith from 1910 to Hester How’s portrait from 1913. What kind of man do you think Smith was? How has Forster tried to convey Smith's character?

What similarities or differences in style do you notice between the two paintings?

Which portrait do you prefer? Provide specific reasons for your choice.

Q1. Look at the picture of Hester How and answer the following questions:

Q2. If you could paint a portrait of someone, who would it be? Why would you choose that person? How would you portray aspects of their personality? What materials would you use?

Q1. In Forster’s time, those who achieved celebrity were often those who did so through their accomplishments. The idea of fame and celebrity has changed dramatically over the past 10-20 years, and so have the criteria for who is considered worthy of a portrait. List some of the famous portrait artists today, and the kinds of people they capture in their artwork. What similarities and differences do you notice between Forester’s subjects and those on your list?

Q3. Forster was fascinated by was he could read from people’s faces. He said “A soul looked out from every face. Each person’s face was a page of eternity written with the pencil of time.” Retired Oxford professor Goldwin Smith was requested by Forster to sit for a portrait in Goldwin Smith Hall at Cornell University, the old man refused. He said, “It’s useless to paint a wreck!” Forster responded by saying that personality survives the years and it was the personality he wished to interpret.

Do you agree with Forster’s point of view? What can you learn from a face? Is your impression always accurate? Do we have an age-bias in our culture, which tends to prefer the young?

Forster’s personal letters and papers can be found at the Toronto Reference Library: