Patrons of Julian Schnabel: Art and Film may also be interested in: 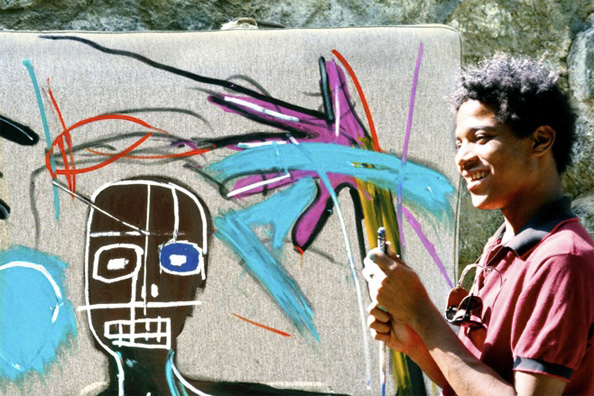 "If THE RADIANT CHILD embellishes the legend in a hundred small ways, its cleverest maneuver is to keep its subject at enough of a remove to enhance his mystique. It should help push the prices of his work higher."
- NEW YORK TIMES

This thoroughly engaging and respectful documentary, charts the meteoric rise and fall of the inimitable New York painter with rock-star status and one of the leading lights of late-20th-century art. The film is centered on a rare 1985 interview that director and friend Tamra Davis shot with Basquiat. Much can be gleaned from insider interviews and archival footage, but it is Basquiat's own words and work that powerfully convey the mystique and allure of both the artist and the man.

Jean-Michel Basquiat (1960-1988) was born in Brooklyn to a Puerto Rican mother and a father of Haitian extraction. Blessed with a rebellious nature, he ran away from home a lot during adolescence, finally leaving for good at 17. Moving to Manhattan, he dropped out of school, and during the late-70s, covers the city with the graffiti tag SAMO. As he put it, “The whole object of doing graffiti is fame.” In his short career, Jean-Michel Basquiat was a phenomenon. In 1981, he puts paint on canvas for the first time, and sells his first piece to Deborah Harry for $200. By 1983, the selling price is more than a million.Tragically, heroin addiction kills Basquiat in 1988 at age 27, at the height of his career. Through all of this, Davis adroitly reveals that for all Basquiat's soaring fame and fortune, he could not break into Manhattan's elite art circles.

May 6, 2010. American art superstar Julian Schnabel has spent his life pushing the limits of painting and crossing artistic boundaries as an award-winning filmmaker. Now, for the first time, a major retrospective examines the connections between painting and film in Schnabel’s work.

Julian Schnabel in conversation with AGO curator of modern and contemporary art David Moos.