Johnson sets the House on Fire at AGO

(TORONTO, ON: July 2, 2009) In House on Fire, a new exhibition of photo-based works and sculpture by 33-year-old Winnipeg-based artist Sarah Anne Johnson, the political meets the personal as Johnson explores the story of her grandmother's unwitting participation and mistreatment in a CIA research program in Montreal in the mid-1950s. 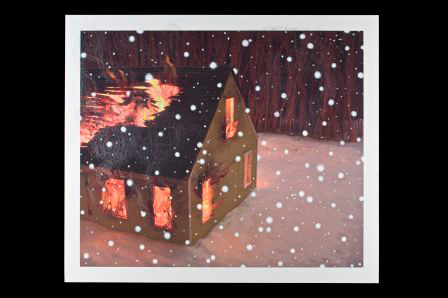 Opening at the Art Gallery of Ontario on July 4 and continuing through August 23, House on Fire features a series of personal photographs of Johnson and her grandmother augmented with drawings in pencil and paint, as well as nine small bronzes and a new sculptural work, a dollhouse, the work from which the exhibition takes its title.

“Johnson’s ability to combine media, working fluidly between sculpture and photography, is part of what has drawn so much attention to her work,” says Michelle Jacques, the AGO’s associate curator of contemporary art. “In her previous work, [Johnson’s] focus was on public and environmental issues. Now, with House on Fire, she’s gotten personal and her unique approach yields disarmingly affecting results.”

In the mid-1950s, as part of the CIA project “MK-ULTRA,” patients in the care of Dr. Ewen Cameron of the Allan Memorial Institute at McGill University, Montreal, were subjected to a series of mind-control experiments including shock and drug therapies and medically induced prolonged sleep. Johnson’s maternal grandmother, Velma Orlikow, who had sought Dr. Cameron’s help for postpartum depression, was one of these patients. It was not until 1977, when the details of MK-ULTRA were revealed in The New York Times, that Orlikow and her family finally learned what had been done to her. In 1979, the artist’s grandmother and eight other patients initiated the lawsuit Orlikow, et al. v. the United States. In 1988, the CIA settled out of court.

In 2008, Johnson was awarded the inaugural Grange Prize for contemporary photography. Launched in 2007, this unique, annual partnership between the AGO and Aeroplan recognizes the best in Canadian and international contemporary photographers. The $50,000 award is the largest of its kind in Canada, and is determined entirely by the public voting. Each year, candidates are selected from Canada and one other country. This year’s winner is Mexican photographer Marco A. Cruz. Next year’s partner country will be France.

Johnson was born in Winnipeg, Manitoba in 1976. She received her BFA from the University of Manitoba in 2002, and completed her MFA at Yale University in 2004. Her work is included in many distinguished collections including the Guggenheim Museum of Art in New York and the National Gallery of Canada. She lives and works in Winnipeg, and is represented by the Julie Saul Gallery, New York and Stephen Bulger Gallery, Toronto.

With a permanent collection of more than 73,000 works of art, the Art Gallery of Ontario is among the most distinguished art museums in North America. The Gallery began an extraordinary new chapter in its history when it launched Transformation AGO in 2002. Multi-faceted in scope, Transformation AGO involved the unprecedented growth of the permanent collection, an innovative architectural expansion by world-renowned architect Frank Gehry, and the strengthening of the museum’s endowment resources. As the imaginative centre of the city, the new AGO dramatically enriches our visitors’ experiences and provides greater access to the full vibrancy of the art museum.

Celebrating its 25th anniversary in 2009, Aeroplan, Canada’s premier loyalty program, is owned by Groupe Aeroplan Inc., a leading international loyalty management corporation. Aeroplan is a long-standing patron of the Arts, with a history of supporting artists and arts initiatives across Canada. Of particular significance is the company’s work, in partnership with the Art Gallery of Ontario, to develop The Grange Prize for contemporary photography. Aeroplan is committed to fostering a long-term, international dialogue about this important art form. Aeroplan has also joined the AGO in a three-year partnership as the Signature Partner of the Photography Collection Program, supporting planned AGO activities to engage visitors with photography, including special lectures and tours.

For more information about Aeroplan, please visit www.groupeaeroplan.com or www.aeroplan.com