Portrait of the Nawab of Arcot

Look at the subject’s expression, posture, clothing and setting. What do you think the artist was telling us about this ruler in this portrait?

This portrait was painted by a European artist. What clues in the painting tell us that? 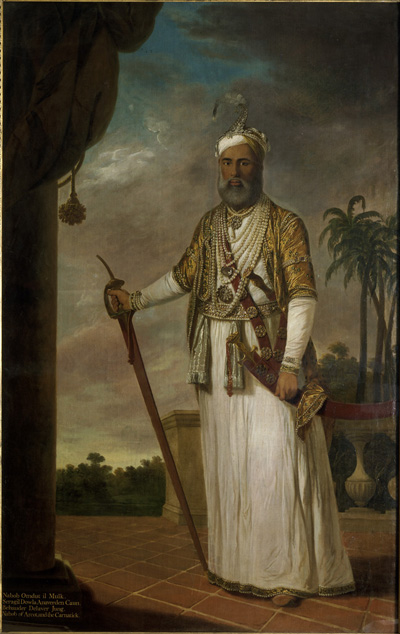 Portrait of the Nawab of Arcot

Maharajas commissioned artists to paint their portraits as a record of their reign. How do we record our lived experiences today?
New to Tumblr? Start here.

This portrait of Nawab of Arcot is painted in the traditional European academic art style. The Nawab is painted as he would have looked in real life and he is looking directly at you, the viewer. In traditional Indian miniature style paintings, figures are painted in profile so that the viewer only sees one side of the figure, and describe a more idealized version of a ruler rather than recording what the subject looked like. The palm trees in the background are meant to suggest that India is the setting, however the classical architecture of the balustrade reflect a European influence. The richly draped curtain and dark, stormy sky are compositional techniques typical of the European academic style as well. This painting represents how maharajas increasingly turned to European artists to create art for their royal courts instead of Indian artists during British rule.

The term “Nawab” is a title that Indian rulers themselves would have used. Rulers in different parts of India used a variety of titles such as “Maharana” or “Maharajao.” The term “Maharaja” was a title given by British authorities to the kings who showed loyalty, service and good leadership according to their judgement.