The Lives of Maharajas

Can you find the Maharaja in this scene? How has the artist drawn your attention to him?

What choices has the artist made to effectively display the palace’s architecture and the activities taking place within it? 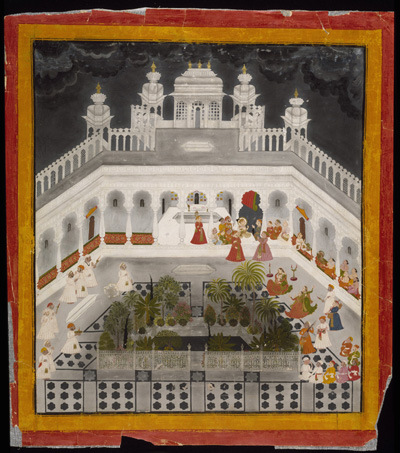 Discuss Your Thoughts on Tumblr!

The palaces of maharajas demonstrated their power, wealth and authority through architecture. If money was no object, what would your dream home look like and why?
New to Tumblr? Start here.

Here the young ruler - identified by the nimbus of light circling his head - and his nobles are being entertained by dancers and musicians in a garden courtyard of his palace in Udaipur.

The private life of Indian kings – their marriages, family relationships, pastimes and pleasures – was often intensely public and political. The palace itself was not only a residence for the extended royal household, but also the centre for government, the arena for durbar (formal meetings with the king), a garrison for troops and the site of artisans’ workshops.

Women are dancing and playing instruments (royal women were often influential figures at court and important patrons of religion and the arts). The priests in attendance on the left side of the image suggest that a religious occasion is the subject of this artwork, and illustrates the king’s important role as a patron of religion, as well as being a fair governor and a strong warrior.

This painting demonstrates the traditional miniature style of India.  Rather than providing a realistic view of the scene, this work is intended to provide a glimpse into the Maharaja's life in an idealized, informative way.  Fine detailing, stylized characterizations, bright or contrasting colours, and a variety of perspectives all serve to give a clear view of the setting, the figures and the action in the scene.