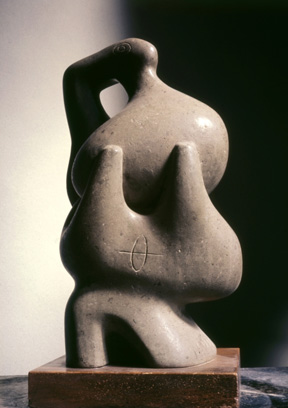 (TORONTO: October 5, 2010) An exhibition heralded by the Guardian as "the most important exhibition of [Henry] Moore's work for a generation" is coming to the Art Gallery of Ontario this fall. The Shape of Anxiety: Henry Moore in the 1930s is a dramatic reconsideration of one of the 20th century's most revered artists. The exhibition will be on view from October 23 through February 6, 2011 in the AGO's Henry Moore Sculpture Centre.

Organized by Tate Britain in collaboration with the AGO, The Shape of Anxiety features 53 works, 37 of which have never before been seen in Canada, including 36 sculptures and 17 drawings. The works reveal a young artist troubled by the seismic cultural shifts of the early 20th century, and rebellious against his teachers' traditional views of sculpture.

"The works of Henry Moore are a cornerstone of the AGO collection and integral to the cultural fabric of our city," says Matthew Teitelbaum, Michael and Sonja Koerner director, and CEO of the AGO. "We're deeply excited to give viewers a chance to see so many terrific works for the first time, and to experience a side of this great artist that they haven't before."

"Many people know mid-and-late-period Henry Moore so well-the romantic, curving shapes of the human form, the associations with nature and landscape," says Michael Parke-Taylor, AGO curator of modern art. "But the younger Moore was much more of a radical, aesthetically and politically, whose works were formed in the wake of the carnage of World War One, in the light of new ideas about sex and the unconscious, and amid the growing political tensions of the 1930s."

In 1974, Moore gifted to the AGO more than 300 sculptures, drawings and prints spanning five decades. His original gift has since grown to over 900 works of art, the largest public collection of Henry Moore's art work in the world. The Henry Moore Sculpture Centre opened in 1974, the same year that his iconic Large Two Forms was installed in front of the AGO, at the corner of Dundas and McCaul streets.

A 240-page softcover catalogue, published by Tate Britain, will be available for purchase at shopAGO for $49.95. The publication, titled Henry Moore, is edited by Chris Stephens, curator of modern British art and head of displays at Tate Britain, and includes essays by Moore scholars, as well as artist statements by Bruce McLean, Lucy Skaer, and Simon Starling. The catalogue is generously supported by Al and Malka Green.

AGO members will receive an exclusive preview of the exhibition on Wednesday, October 20 from 10 am to 8:30 pm.

With a permanent collection of more than 79,450 works of art, the Art Gallery of Ontario is among the most distinguished art museums in North America. In 2008, with a stunning new design by world-renowned architect Frank Gehry, the AGO opened its doors to the public amid international acclaim. Highlights include Galleria Italia, a gleaming showcase made of wood and glass running the length of an entire city block along the Gallery's façade; and the feature staircase, spiraling up through the roof of Walker Court and into the new contemporary galleries above. From the extensive Group of Seven collection to the dramatic new African art gallery; from the cutting-edge works in the Vivian & David Campbell Centre for Contemporary Art to Peter Paul Rubens' masterpiece The Massacre of The Innocents, a highlight of the celebrated Thomson Collection, there is truly something for everyone at the AGO.

AGO’s Maharaja Exhibition will be FREE to Visitors Under 25

The corporate community has come together with an unprecedented sponsorship in support of the Gallery’s major fall exhibition. Thanks to generous support from Fairfax Financial Holdings Ltd. , The Globe and Mail, Rogers Communications Inc. , and Scotiabank Group, the Art Gallery of Ontario is thrilled to announce that admission to Maharaja: The Splendour of India’s Royal Courts is free to visitors 25 years of age and under.