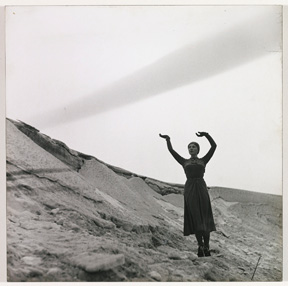 Exhibition marks the artist's receipt of the Gershon Iskowitz Prize

(TORONTO - January 18, 2010) An exhibition celebrating the career of pioneering Canadian artist Francoise Sullivan will open at the Art Gallery of Ontario on February 10, 2010. Françoise Sullivan: Inner Force - Winner of the Gershon Iskowitz Prize at the AGO marks Sullivan's receipt of the 2008 Gershon Iskowitz prize, awarded for her contribution to visual arts in Canada.

The exhibition includes five large scale canvasses from the artist's recent Hommage series - majestic, abstract works exploding with colour and rhythm, each one dedicated to an artist colleague or friend who has died. Among the artists to whom Sullivan pays tribute are Jean-Paul Riopelle, Guido Molinari, and Paterson Ewen.

"Françoise Sullivan is among the most influential and inventive contemporary Canadian artists," says David Moos, the AGO's curator of contemporary art. "In each medium she selects - whether painting, dance, sculpture or photography - Sullivan remains an innovator whose work has made a vital contribution to Canadian visual identity."

The exhibition also features a ground-breaking series of photographs dating from January 1948 when Sullivan, who had just returned from New York where she had studied dance with Martha Graham, staged her famous Danse dans la Neige - a self choreographed performance in the wintry landscape of Quebec.

Sullivan will be visiting the AGO to mark the exhibition's opening, participating in two celebratory events: a free performance of four of her dance pieces in Walker Court on February 10, and "Inspired: Françoise Sullivan in Conversation with Robert Enright", a discussion at the Anne Tanenbaum Gallery School on February 11. Tickets to the discussion are $15 for members and $18 for non-members and can be purchased at http://www.ago.net/lectures-and-talks.

Françoise Sullivan was born in 1925 in Montreal. In a career that has spanned six decades, she has worked fluidly between multiple media, gaining early acclaim for her work as a dancer and choreographer  before incorporating painting, sculpture, and photography into her artistic practice. Sullivan was a member of Les Automatistes, a group of Montréal artists who used their work to advocate for artistic and social change during the 1940s and 1950s. She is a member of the Order of Canada and received the Governor General's Award in the Visual and Media Arts in 2005.

Françoise Sullivan: Inner Force - Winner of the Gershon Iskowitz Prize at the AGO will be on display until May 30, 2010. The exhibition is part of the AGO's winter season, which focuses on new and established contemporary art. Other exhibitions include Rembrandt / Freud: Etchings from Life; Wangechi Mutu: This You Call Civilization?; Sculpture as Time: Major Works. New Acquisitions; and Anselm Kiefer: Palmsonntag. The hit exhibition King Tut: The Golden King and the Great Pharoahs continues until April 18, 2010.

ABOUT THE GERSHON ISKOWITZ PRIZE AT THE AGO

In 2007 the AGO and the Iskowitz Foundation joined forces to raise awareness of the visual arts in Canada with the renaming of the annual award established twenty years ago by Canadian painter Gershon Iskowitz (1921-1988). Iskowitz recognized the importance of grants to the development of artists and acknowledged that a grant from the Canada Council in 1967 enabled him to formalize his distinctive style. The AGO is home to the artist's archives, which include early works on paper, sketchbooks and memorabilia, and holds twenty-nine paintings by Iskowitz (spanning the period from 1948 to 1987) in its permanent collection.

With a permanent collection of more than 79,000 works of art, the Art Gallery of Ontario is among the most distinguished art museums in North America. In 2008, with a stunning new design by world-renowned architect Frank Gehry, the AGO opened its doors to the public amid international acclaim. Highlights include Galleria Italia, a gleaming showcase made of wood and glass running the length of an entire city block along the Gallery's façade; and the feature staircase, spiralling up through the roof of Walker Court and into the new contemporary galleries above. From the extensive Group of Seven collection to the dramatic new African art gallery; from David Altmejd's monumental installation The Index to Peter Paul Rubens' masterpiece The Massacre of The Innocents, a highlight of the celebrated Thomson Collection, there is truly something for everyone at the AGO.