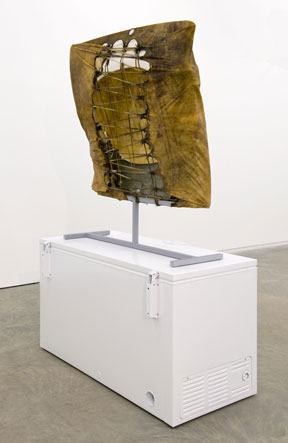 (TORONTO - March 31, 2011) Canadian artist Brian Jungen, internationally renowned for creating artwork that repurposes objects from contemporary culture to reflect aboriginal symbols and traditions, will exhibit new work at the Art Gallery of Ontario (AGO) this spring. Presented in celebration of Jungen's receipt of the $25,000 Gershon Iskowitz Prize at the AGO in 2010, Brian Jungen: Tomorrow, Repeated will feature seven works by Jungen exhibited alongside works by legendary British sculptor Henry Moore in the AGO's Henry Moore Sculpture Centre. The exhibition will be on view from May 5 through August 7, 2011.

The works in Tomorrow, Repeated build upon the sculptural shape-shifting in which Jungen's previous work engaged: four works feature animal hides stretched and mounted over cut-up car parts and displayed on white chest freezers; other works include police barricades built from cedar and Douglas fir, and prints made from hide left over after the artist cut out circular shapes for drum skins.

Many of the works included in the exhibition were created during an exhibition at Vancouver's Catriona Jeffries Gallery between November 2010 and January 2011, when Jungen turned the gallery into his provisional workshop, creating and installing works throughout its run.

"Brian Jungen is an artist of international significance whose work challenges us to merge images, objects, traditions, and geographies that we might consider to be worlds apart," says Matthew Teitelbaum, the AGO's Michael and Sonja Koerner Director, and CEO. "It is with this spirit of connection that we present Jungen's works alongside those of Henry Moore, another artist whose visionary blending of divergent sculptural traditions shaped a new visual language for his time."

"When Brian Jungen came to the AGO to receive the Iskowitz Prize last spring, he responded immediately to the Henry Moore Sculpture Centre," says Michelle Jacques, the AGO's acting curator of Canadian Art. "Tomorrow, Repeated offers the viewer a chance to consider two artists who, although separated by time and geography, share a connection to non-European sculptural tradition, an astute understanding of sculptural form, and an intimate relationship to their materials."

The AGO currently holds four works by Jungen in its collection: Prototype for new understanding #6 (1999), from the artist's Prototypes series, in which he transformed Nike Air Jordan sneakers into masks connoting the colours and styles of those of the Aboriginal Northwest Coast; and 1960, 1970, and 1980, three large-scale sculptures made from golf bags and assuming the form of totem poles.

Born in 1970 in Fort St. John, British Columbia to a Swiss father and a Dunne-za mother, Jungen has risen to prominence over the last decade by creating artwork that recasts traditional Native imagery and symbolism using ordinary objects such as plastic lawn chairs, golf bags, and Nike Air Jordans. He has exhibited extensively in Canada and internationally in such venues as the Tate Modern, the Smithsonian's National Museum of the American Indian, and the Art Gallery of Alberta, where a retrospective of Jungen's work is on view through May 8.

The Gershon Iskowitz Prize at the AGO recognizes an artist's outstanding contribution to visual arts in Canada and is awarded each spring. The winner receives $25,000 and an exhibition of their work at the AGO. Toronto-based multidisciplinary artist Shary Boyle was awarded the prize in 2009. The winner of the 2011 Iskowitz Prize will be announced in mid-May.

In 2009, a commemorative volume celebrating the first 20 years of the Iskowitz Prize was released. Titled The Gershon Iskowitz Prize: 1986-2006, the 112-page book spotlights the first 21 artists to receive the prize, including Gathie Falk, Betty Goodwin, Rodney Graham, Vera Frenkel and General Idea. It is available for purchase at shopAGO.

A public opening to celebrate Brian Jungen: Tomorrow, Repeated will be held at the AGO on Wednesday, May 4. The artist will be in attendance.

Contemporary programming at the AGO is supported by the Canada Council for the Arts.

ABOUT THE ISKOWITZ PRIZE AT THE AGO
In 2007, the AGO and the Iskowitz Foundation joined forces to raise awareness of the visual arts in Canada with the renaming of the annual award established twenty years ago by Canadian painter Gershon Iskowitz (1921-1988). Iskowitz recognized the importance of grants to the development of artists and acknowledged that a grant from the Canada Council in 1967 enabled him to formalize his distinctive style. The AGO is home to the artist's archives, which include early works on paper, sketchbooks and memorabilia, and holds 29 paintings by Iskowitz (spanning the period from 1948 to 1987) in its permanent collection.