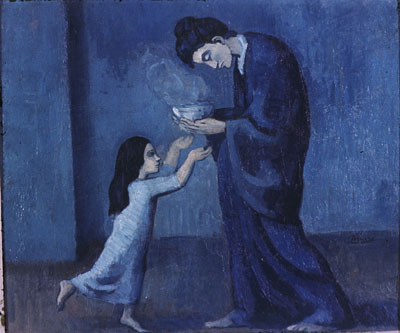 Michael and Sarah Stein, Paris;[1] Gertrude Stein, Paris.[2] Karl/Klaus Sternheim, Paris by 1932.[3] Von Ripper, Paris.[4] (M. Knoedler & Co., New York).[5] (Caroll Carstairs Gallery, New York); purchased April 1949 by Mr Moffat Dunlap Esq., Toronto;[6] by inheritance to his wife Mrs Margaret Dunlap; Mrs Dunlap remarries with Mr J. Harold Crang, Toronto by 1957; gift 1983 to AGO.
Note Provenance gap: After Sternheim (1932), it is not clear when the picture was acquired by Von Ripper, Knoedler, and eventually Carstairs before it was sold in 1949. [1] New York/San Francisco 1970-1971, p. 164 [2] Moravia & Lecaldano 1968, no. 34, p. 89. It is unclear which of the Steins acquired the painting and which of the Steins disposed of it. Michael Steins greater activity in the art market leads one to believe he acquired it and that he would have been the one to dispose of it, however Daix and Boudaille 1966 (no. VII.11, p. 209) claim Gertrude Stein owned the painting. Apparently, this painting was a favorite with the entire Stein family. It has long been known as having belonged to Gertrude Stein; it appears in old photographs of the apartment of her brother and sister-in-law, Michael and Sarah Stein. Margaret Potter (Associate Curator, Museum of Modern Art, New York) to Mrs Harold Crang, 11 March 1970, Accession 83/316. However, there has been disagreement regarding Gertrude Steins ownership of the painting. Although your painting, Soup [sic], was not in Gertrudes collection, I wonder whether you would still be willing to lend it to us. Jean Sutherland Boggs (National Gallery of Canada) to Mrs J.H. Crang, 2 March 1971, Accession 83/316. Subsequent correspondence on the matter of the Gertrude Stein provenance further muddies the water. The Stein family was very close at that time, and it is well-known that the Steins traded works back and forth and that Michael Stein, the elder brother, acted as a financial agent for all of the Stein family. Given the circumstance, I cannot be absolutely sure that the painting was once owned by Gertrude, but the circumstantial evidence is strong. Margaret Potter (Associate Curator, Museum of Modern Art, New York) to J.H. Crang, 1 April 1971, Accession 83/316. [3] Records are incomplete regarding the given name of the owner. The credit line under the reproduction of AGO 83/316 in Cahiers dArt, VII (June 1932), p. 162 gives Klaus Sternheim as the owner. A letter from Christopher Burge (Vice President, Christies Appraisals, New York) to Mrs J. Harold Crang (Toronto), 4 January 1984, Accession 83/316 also indicates Klaus Sternheim as the owner, although Burges letter does not provide a location. The credit line in Zervos 1932 (I), no. 131, pl. 64 indicates Karl Sternheim is the owner. [4] Moravia & Lecaldano 1968, no. 34, p. 89. [5] Daix and Boudaille 1966 no. VII.11, p. 209 [6] Z. Sharkey (Carstairs Gallery, New York) to Mr Moffat Dunlap (Toronto), 11 April 1949, Accession 83/316 acknowledges receipt of payment through the Art Gallery of Toronto for La Soupe.