Examine the hammer (the mechanism above the trigger) of these pistols closely. The hammer is in the shape of what animal? What might this animal symbolize?

Examine the gold script decorating the frame and barrel of the pistols. What language is the script? What might the script symbolize? 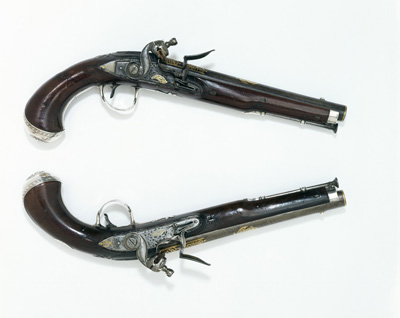 Tipu is reported to have declared: “Better to die like a soldier than to live a miserable dependent of the infidels on the list of their pensioned rajas and nabobs!” What sentiment or feeling is Tipu expressing in this quote? How do you demonstrate against authority in your life?
New to Tumblr? Start here.

The hammers on these pistols are shaped like the heads of a tiger. Tigers are the national animal of India and given their strength, power and beauty, are often associated with royalty.

The tiger-shaped hammers also represent the owner of these pistols, Tipu Sultan of Mysore in south India (r. 1782-99), one of the most remarkable rulers of the 18th century. He was known as the ‘the Tiger of Mysore’, and he employed the potent symbol of a tiger on many of his possessions.

The gold script decorating the frame and barrel of the pistols is Arabic. Arabic is the language of the Islamic religion of which Tipu Sultan belonged. Tipu was a devout Muslim who saw himself as God’s instrument for driving the British out of the subcontinent; in order to further this aim he allied himself with the French. The French were the ones who brought the latest European technological innovations in firearms to Tipu’s court.