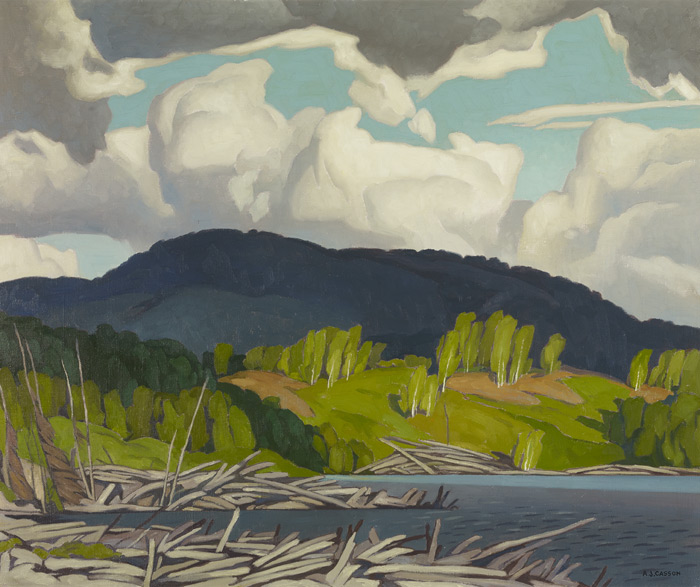 Alfred Joseph Casson (Canadian, 1898 – 1992), Pugh Lake, 1965, oil on canvas. Collection of the Toronto District School Board Donated to Bessborough Public School by the Bessborough Home and School Association, 1967. © 2012 Estate of A. J. Casson

Alfred Joseph Casson was born in Toronto in 1898, and went to school in Guelph and Hamilton. His family returned to Toronto in 1916, where he was introduced to the work of the members of the soon to form Group of Seven. Casson enrolled in art classes at Toronto’s Central Technical School and began a career as a freelance commercial designer. He later worked at a commercial art firm, and met Group of Seven member Franklin Carmichael, who taught Casson about typography and graphics. The two had a shared interest in watercolours and founded the Ontario Society of Painters in Watercolour with Frederic Brigden. Casson and Carmichael also went on sketching trips together, exploring small towns and rural areas.

Casson was invited to join the Group of Seven painters in 1926. He accepted, becoming the youngest member of the group. It took Casson a while to establish his own voice within the group, and he did so by choosing rural towns as subjects for his paintings. He had a long career as a respected artist. Casson died in 1998, at the age of ninety-four. He is buried alongside other Group members in the cemetery on the McMichael Canadian art gallery grounds.

Casson was interested in the relationship between humans and nature. The piles of logs in this painting show some evidence of logging at Pugh Lake. He was one of the few members of the Group of Seven to explore man’s impact on the landscape in his work. Unlike the other members, Casson explored small towns and rural settings in southern and central Ontario.

Casson was detailed oriented. He started his watercolour paintings with a drawing and made every attempt to minimize colours bleeding into each other on the canvas. This painting of Pugh Lake reveals Casson’s attention to detail and his need to prevent colours from blending together. Compared to the free brush strokes and colliding colours of some of the other members of the Group of Seven, Casson’s painting almost looks like silkscreen or block prints.

Unlike most of the other members of the Group of Seven, Casson was interested in man’s impact on the environment, and the relationship between rural towns and the surrounding landscape. He was able to develop his own unique style of work, while still remaining connected to the Group’s shared ideals.

Works like Parry Sound and Country Store show Casson’s interest in rural towns and borders, where as Jack Pine and Poplar illustrates Casson’s shared interest in the Canadian landscape. Casson was more comfortable exploring southern Ontario scenery and small towns, as opposed to the extensive trips in the north preferred by many members of the group.

Like fellow Group of Seven member Lawren Harris, Casson wanted to simplify his work and eliminate all aspects that he considered nonessential.

Casson was born in Toronto and active in the commercial art and fine art communities for much of his career. He studied art and design at the Toronto Technical School and Central Technical School, which has an excellent reputation for hands-on art programs today.

Casson also participated in public commissions. He painted a mural for the MacDonald Block at Queen’s Park in Toronto. He also worked on numerous advertising campaigns and commercial illustrations during his early career, and was the chief designer for Simpson Matthews, a firm that specialized in screen printing.

The AGO has a number of works by A.J. Casson, many of which are on permanent display in the galleries. These works span five decades of his career, and include detailed paintings of rural towns and landscapes, along with small sketches in oil.

Casson served as president of the Ontario Society of Artists in the 1940’s. He was also a member of the Art Gallery of Toronto board in the mid 1950’s (now the AGO).

Q1. Explore A.J. Casson’s paintings of rural towns and villages. Describe what you see in these paintings, and discuss the relationship between the landscape, the weather, and the man-made buildings. What clues did Casson leave behind that reveal the messages communicated in these works?

A1. Many of these works show man’s insistence on survival during harsh conditions (such as winter). Some of these works reveal man’s attempt at organizing nature, by clearing land, building roads, and constructing shelters and places for commerce.

Discuss the relationships that exist between man and nature today. Use examples from your city or town to illustrate your point of view.

Q1. Like fellow Group of Seven member Lawren Harris, A.J. Casson was interested in simplifying his work. This meant selecting the items represented in the paintings, and eliminating elements and details that were considered nonessential.

Select a street, neighbourhood, or building to re-create and simplify.

The McMichael Canadian Art Gallery has numerous works by Casson, and is home to Casson’s final resting place, alongside the other members of the Group of Seven.

The National Gallery of Canada also has a collection of works by Casson.