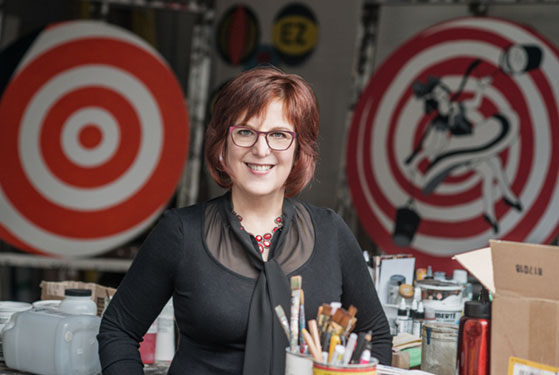 TORONTO (Oct. 29, 2015) — The Gershon Iskowitz Foundation in partnership with the Art Gallery of Ontario (AGO) is pleased to announce that Victoria-based artist Sandra Meigs is the recipient of the 2015 GERSHON ISKOWITZ PRIZE AT THE AGO. The award, which is presented annually to an artist who has made an outstanding contribution to the visual arts in Canada, includes a $50,000 cash prize and a solo exhibition at the AGO, coming in 2017.

Sandra Meigs’ work has been described as expressive, eclectic and interdisciplinary; her paintings are known for their unique approach in combining complex narratives with comic elements in large scale works such as The Basement Panoramas and Strange Loop. She is dedicated to painting and refers to the possibilities of enchantment that painting presents through colour and form. For Meigs the very authenticity of one’s experience offers proof that what is imagined when looking at a painting is as real as anything else that one experiences in the world.  In addition to painting, she has also woven sculpture, film, sound, and other media in her works.

Jurors for the 2015 prize included Kim Adams, artist and a previous recipient of the Prize; Musée d’art contemporain de Montréal curator Lesley Johnstone; collector Jay Smith; and curator/critic Sarah Milroy. Milroy and Smith are both trustees of the Foundation.  According to Johnstone, “Sandra Meigs is a highly creative artist whose projects blend painting, sculpture and performance in a manner that is all her own. Comical and sad, materially rich and socially engaged, psychologically intense but also somehow playful, her work continues to surprise us with each new project. Hers is a unique voice and her influence within the Canadian art milieu is strongly felt.”.

“Sandra Meigs is an innovative contributor to the Canadian art world, and her unique vision has rightfully earned her a space on the international stage,” says Stephanie Smith, the AGO's Chief Curator. “Primarily a painter — and one with an exquisite touch — Meigs makes vivid, playful, and inventive works that challenge and delight.  The AGO is pleased to collaborate with the Gershon Iskowitz Foundation to present this prize to an extraordinary Canadian artist, and we welcome the opportunity to display an exhibition of her work in the future.”

More details about the Meigs exhibition at the AGO in 2017 will be announced as they become available.

ABOUT SANDRA MEIGS
Born in Baltimore in 1953, Sandra Meigs studied at the Rhode Island School of Design, the Nova Scotia College of Art and Design (B.F.A. 1975) and Dalhousie University (M.A. 1980).  She has lived and worked in Canada since 1973 and for the past 23 years has taught in the Visual Arts Department of the University of Victoria.

Meigs is represented by the Susan Hobbs Gallery in Toronto which has presented her installation and painting projects since 1993.

ABOUT THE GERSHON ISKOWITZ FOUNDATION
The Gershon Iskowitz Foundation is a private charitable foundation established in 1986 through the generosity of painter Gershon Iskowitz (1921 – 1988). Iskowitz recognized the importance of grants in the development of artists in Canada, in particular acknowledging that a grant from the Canada Council in 1987 gave him the freedom to create his distinctive style.  Iskowitz’s works are in public and private collections across Canada and abroad. The Foundation’s principal activity is the designation of the Prize which is unique in that one can neither apply nor be nominated. A second distinct characteristic which many of the recipients have commented on is that the Prize is an excellent example of an artist supporting other artists. Iskowitz himself was actively involved in designating the Prize in its first years; after his death this responsibility passed to juries composed of trustees of the Foundation and invited artists and curators. The achievements of the first 20 years of the Foundation and the Prize are detailed in The Gershon Iskowitz Prize 1986 – 2006 .

ABOUT THE GERSHON ISKOWITZ PRIZE AT THE AGO
At the 20-year mark of the Prize, the Foundation formed a collaborative partnership with the Art Gallery of Ontario to raise awareness of the importance of the Prize and through it the visual arts in Canada. The AGO is home to Iskowitz’s archives, which include early works on paper, sketchbooks and memorabilia, and it holds 29 paintings by Iskowitz spanning 1948 to 1987 in its collection. Beginning in 2006, the Prize has included a solo exhibition of the winner’s work at the Gallery. Among the 28 previous recipients of the Prize are Vera Frenkel, Betty Goodwin, General Idea, Stan Douglas, John Massey, Irene F. Whittome, Françoise Sullivan, Shary Boyle, Brian Jungen, Michael Snow and Kim Adams.

ABOUT THE AGO
With a collection of more than 90,000 works of art, the Art Gallery of Ontario is among the most distinguished art museums in North America. From the vast body of Group of Seven and signature Canadian works to the African art gallery, from the cutting-edge contemporary art to Peter Paul Rubens’ masterpiece The Massacre of The Innocents, the AGO offers an incredible art experience with each visit. In 2002, Ken Thomson’s generous gift of 2,000 remarkable works of Canadian and European art inspired Transformation AGO, an innovative architectural expansion by world-renowned architect Frank Gehry that in 2008 resulted in one of the most critically acclaimed architectural achievements in North America. Highlights include Galleria Italia, a gleaming showcase of wood and glass running the length of an entire city block, and the often-photographed spiral staircase, beckoning visitors to explore. The AGO has an active membership program offering great value, and the AGO’s Weston Family Learning Centre offers engaging art and creative programs for children, families, youth and adults. Visit ago.net to learn more

Opening in Toronto on Jan. 31, 2015, at the Art Gallery of Ontario (AGO) Memory Unearthed: The Lodz Ghetto Photographs of Henryk Ross will display over 200 of these incredible images, including original prints in addition to prints from surviving negatives, contact sheets and film projections

This summer the Art Gallery of Ontario (AGO) invites visitors to make a 15,000-kilometre artistic journey from Canada’s North to the southern tip of Argentina and Chile through the work of some of the world’s most acclaimed landscape painters.

No passport required! Tickets go on sale June 5 for the AGO’s journey through the Americas

Picturing the Americas: Landscape Painting from Tierra del Fuego to the Arctic opens in Toronto on June 20, 2015. Developed jointly in an innovative partnership between the Terra Foundation for American Art, the Pinacoteca do Estado de São Paulo and the AGO, this evocative exhibition brings together over 100 works of art from 10 lending countries and goes behind the canvas to reveal the histories, conflicts and scientific explorations that shaped how we see the land we inhabit. Tickets for this exciting expedition go on sale June 5, 2015.

AGO to host major exhibition of rare Turner works this fall

This fall the Art Gallery of Ontario (AGO) will host a major exhibition celebrating the experimental and contemplative works of Joseph Mallord William Turner (1775–1851), a giant of British art.

To celebrate this landmark exhibition, the Gallery is presenting an immersive series of events, including a free talk by celebrated Canadian author Joseph Boyden and dance lessons every Saturday in Walker Court. To book timed-entry tickets and for more information about the exhibition and summer programming at the AGO, visit ago.net/picturing-the-americas.

The Art Gallery of Ontario (AGO), in partnership with Facing History and Ourselves and the Sarah and Chaim Neuberger Holocaust Education Centre, has developed a digital archive of more than 4,000 rarely seen images from its Henryk Ross Collection of Lodz Ghetto Photographs.

Praised by critics across the U.K. as “an exciting, entrancing show” (The Guardian) and “sensational” (London Evening Standard), the acclaimed exhibition J.M.W. Turner: Painting Set Free opens in Toronto at the Art Gallery of Ontario (AGO) on Oct. 31, 2016. Timed-entry tickets for J.M.W. Turner: Painting Set Free at the AGO go on sale Oct. 16, 2015.

The ambitious 2016 contemporary art program at the AGO welcomes Hurvin Anderson, Theaster Gates, Francis Alÿs and Toronto artists to the Contemporary Tower in 2016.